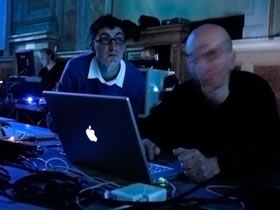 Details is a production of Netmage 07 which took place recently, and came into existence thanks to the cooperation between Armin Linke and Claudio Sinatti, both looking for an experimental area in which photography overcomes the limit of its static nature thanks to an essential movement, aimed at catching what is already inside the picture.

Their extremely poetic live performances on Carl Michael Von Hausswolff’s music stood out for its simplicity and uniqueness during the last edition of Netmage International Festival. An invitation to think about the real meaning of image as well as an expression of very high aesthetic value, a show which Netmage’s audience could not but sit down and watch.

Armin Linke is one o the best known international photographer an a tireless traveller, who works both as a reporter an audio-video researcher. The thousands of images taken by Linke and shown in magazines, boos and exhibitions are kind of endless archives of natural landscapes marked by man’s presence and they gave shape to a ort of atlas of the metamorphosis and mutations of the planet. Like his pictures, his videos and films (among which the work in progress Alps with Piero Zanini, a filmed journey about the most overexposed to media European ecosystem-barrier and its social and economic changes) explore the relationships between spaces, bodies, the way they are perceived and the border between real and fictional world.

Claudio Sinatti is one of the most famous video-makers in Italy as well as one of the best known and appreciated artists abroad. His ten-year activity and his extremely fruitful artistic production has always have the quality to look towards two precise directions: that of quality commercial production on the one side and of a more experimental artistic research on the other.

In this sense Claudio Sinatti was first appreciated for his direction of some Italian pop musicians’ video clips such as Casino Royale, Neffa, Carmen Consoli, Articolo 31, Alex Britti, Africa Unite and 99 Posse. At the same time he started his artistic career as video designer and multi-media artist which brought him to sign some of the most important projects in the slow development of experimental electronic live music.

We asked the two artists how they shared their experiences for the creation of a Live Media show.

Silvia Bianchi: The leitmotif of Netmage’s production this year has been the overcoming of real world limits. How does Details get beyond image’s limits to find a different way?

Armin Linke: My pictures are in fact very real. In my personal files I chose those images that could more look like sets for a film. The aim was to make the audience think of the meaning of real world by creating a feeling of uncertainty whether the pictures belonged to fiction or reality category.

Silvia Bianchi: How have you worked starting from your photographic stuff to create a narrative connection and to turn still images into images in motion?

Armin Linke: I worked with Claudio to create a software that could allow us to work on images by zooming in on details. I chose those pictures on which a study on details was possible, that had both macro and micro-elements and thus many details we could get into. I already worked on a performance which brought audio and video together synchronically but at a very fast pace. The contrary this time everything happened very slowly, so that audience could carefully think about the pictures.

Silvia Bianchi: Claudio, the possibility to create a set with few images in order for the audience to focus on details, as it happened on Armin’s set is against the use of fast and frenzied image. As for Dandelion, the set you created for Netmage 06, you started from one image. Is there a concept behind the choice or was it just for aesthetic reasons?

Claudio Sinatti: Armin’s project is definitely on the same wavelength with my aim at taking away which has characterized my research in the last years. When he asked me to work on the study of a surfing mechanism for his images, that suited my work perfectly. I worked on interface programming pushing a lot for simple controls so that the interpretation could be extemporized to the maximum

Silvia Bianchi: In order to build the patch did you start from audio or did you choose some images and then created a software that could give maximum significance to their sense and structure?

Claudio Sinatti: We created a very simple performing mechanism. It couldn’t have been different knowing Armin’s work and listening to the music. We worked on the construction of a primordial version of the patch and we tried it on Hauswolff’s music. As time went by, we modified the software, often removing something. Armin decided the choice of the images should have been the last thing to do. The final selection was just before the show and that seemed a very good idea to me. In that way he could have got familiar with the performing device without losing freshness when approaching the contents.