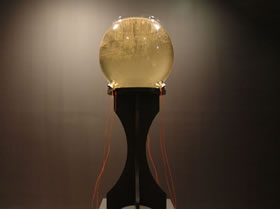 The importance of science and art relationship is internationally discussed and it is at the basis of important academicals and experimental institutions programmes, daily exploring borders and links between art, mathematics, physics, electronics, chemistry, widen possibilities of knowledge and creativity, reflecting the structure of the nature itself, made by many layers and differences.

Having dismissed all forms of fixative and recording media, their installations exist as ever-transforming phenomena offered for observation. Wakening Shrouds (2000), Opening Coccyx (2001), Gas Chamber (2001), Camera Lucida (2003) and Transit of Venus (2004), show rarely seen manifestations which take place directly in front of the observer without being distorted and flattened onto a screen, they often serve to vastly extend the observer’s sensory envelope. The immediacy of this experience allows the viewer/listener to transcend the illusory distinction between scientific discovery and perceptual expansion.

Evelina e Dmitry are working on their last work: 10000 Peacock Feathers in Foaming Acid, in which laser light scans the ever-shifting surfaces of nucleating and dissipating soap bubble clusters. Unlike ordinary white light, which is composed of a variety of frequencies, the hyper-focused singular wavelength of the laser beam is capable of crawling through the micro-inhomogeneities within a bubble’s skin. When refracted at specific angles, this penetrating light generates a reticulate, large-scale projection of normally invisible salty acid formations, and exposes their underlying electro-chemical forces. Bubble behaviors viewed in such close proximity evoke the dynamics of living cells. The title of the work stems from the Chinese expression, ‘the ten thousand things’, signifying the varifold of cosmic phenomena. Though its thickness ranges from a micron to merely a few nanometers, all ‘the ten thousand things’ are refracted through the sensitive skin of a soap bubble.

Silvia Scaravaggi: Which is your background?

Dmitry Gelfand: In the early nineties I studied filmmaking. Already then, I realized that I was far more interested in light itself rather than the way in which it is distorted, flattened and fixed on film. However, it was only when I encountered Evelina, who at the time had completed 7 years of studies in philosophy, that we began to collaboratively create installations concerned with the transformation of light

Evelina Domnitch: I specialized in Phenomenology and specifically in the works of Edmund Husserl . In the beginning of the 20 th century, he published an article, which became an unofficial manifesto of phenomenology, called “Philosophy as Strict Science”. Probably, I got infected by Husserl ‘s idea that any kind of human knowledge, be it art, literature or philosophy, can be cultivated to the point of a universal experience. Another problem that fascinated me was Husserl ‘s analysis of time-consciousness: the premise of his analysis was radically subjective but his methods were of an almost mathematical austerity. Hence, among the most fundamental and elusive cosmic secrets, those of light and time, became the arena for our installation projects.

Silvia Scaravaggi: How did you develop your projects togheter? Where is the balance in your collaboration?

Evelina & Dmitry: There is no division of creativity between us: we equally harness each curve of the process and encourage others (namely scientists and sound artists) to also take part. We have far too many inquiries to be able to unfold them alone.

Silvia Scaravaggi: Talking about your works  for example Camera Lucida experience already presented in Italy during Netmage 2005  n early all require a certain period of retinal adaptation to the darkness. Without the darkness, the light would be invisible, as would the delicate horizon of converging energy systems from which the light emanates. So which are your favourite environments? Which kind of places satisfy you more to set your works?

Evelina & Dmitry: Because our works transpire in the very outer reaches of perceptual resolution, a highly controlled setting is necessary for each installation  one that can easily subtract itself from the observer’s space-time, and or serve to augment specific stimuli. There were two sites that we have deemed non plus ultra: the anechoic chamber (reflectionless sound lab) of Goettingen University in Germany (the largest in Europe), and Nijo Castle , an ancient samurai fortress in Kyoto, Japan . In both instances, audiences experienced an all-engrossing adaptation to the darkness. Firstly, the acoustics incited a state of enhanced spatial awareness, completely contrary to ordinary listening environments. In the anechoic chamber, after only a few minutes of adaptation, most visitors could already hear the whispering signals of their own bodies floating in a directionless vacuum; in the castle, the particular wood, rice paper and tatami surfaces embellished the room tone with limitless warmth and softness.

Total darkness alone serves to sharpen the ears and emancipate the eyes from any hints of physical confinement, but for the brain to undergo the efficacious sensation of boundlessness or surfacelessness (be it that of inner or outer space), acoustic orientation must also be free from perceivable boundaries. An old Taoist expression comes to mind: “It is the emptiness within a house that makes it livable”. The absence of a firm floor in both spaces further accentuated the womb-like state. In the anechoic chamber, the floor was a net suspended several meters above a thicket of sound and microwave proofing. Even the quotidian bombardment of gravity seemed to dissipate. Under such circumstances, audiences were ideally ripened for processing unfamiliar frequencies of light and sound.

Silvia Scaravaggi: Light and sound: how you deal with searching on these important and tiny elements? How much you care about interaction with your works and audience participation?

Evelina & Dmitry: For us, the most significant force underlying our works is extracted from the observer’s own psycho-sensorial input. Our task lies in unleashing this overwhelming force, which ideally, may permit the observer to lucidly enter a dream state. When the customarily invisible becomes a new and exclusive form of visibility while one’s physical presence, and that of others, is totally removed or submerged (as during sleep), the mind is incited to invert the diurnal outward directionality of the senses. To some people this may be akin to a near-death experience, welcomed only by a select few. Because of the extreme fragility of such mental states, we, as artists/performers, are obliged to navigate very carefully through this ‘no man’s land’.

Silvia Scaravaggi: You have performed 10.000 Peackock Feathers in Foaming Acid at Sincronie Festival in Milan. You have also lectured and talked about the “the Psychophysics of Force Field Tailoring”. Can you talk about?

Silvia Scaravaggi: Art-science relationships is the basis of most of your works. What you think about and how you deal with it?

Evelina & Dmitry: Although for most people, the marriage between art and science is not so obvious, their similarities are endless and their differences are quite few. To devise a scientific experiment that concentrates one’s attention on a narrow slice of reality requires inspired subjectivity. In the not so distant bio-cybernetic future, art and science will be the primary if not the only occupations of humankind. Just a hundred years ago, farmers and factory workers comprised 60 percent of the American work force, which has now been reduced to 5 percent. We hope in turn that the whole political machine will be replaced by a computerized referendum, and a lot of other routine, automatable professions will become obsolete. Emancipated from survivalist behaviors, humans will only be left with purely conceptual and creative pursuits. By that time, Art and Science will fuse into an altogether new form of actuating consciousness.

Silvia Scaravaggi: Isn’t also a way to make science closer, and more human and concrete in some sense?

Evelina & Dmitry: There are few things that are as human as Science. Not only because it is a manifestation of human curiosity but also because of its intention to enhance human existence by curing disease, educating, eliminating hard labor and fostering creative endeavors. The bad publicity evoked by the image of a “mad scientist” (an oxymoron), so bluntly exploited by Hollywood, pales in comparison to the gruesome persecution that scientists had to endure during the budding of our civilization. For example, the burning of Giordano Bruno or the guillotining of Lavoisier , the father of chemistry, after the judge’s verdict that “The Republic has no need for geniuses.” To this day, the direct echoes of such aggressive and degenerate mentality are the clichés of science as “cold”, “devoid of emotion”, “difficult to understand”, “boring”, “removed from our daily lives” – these ideas cannot be further from reality. The scientific quest, according to our experience, is one of the most engaging, imaginative, elucidating, and playful processes. Consequently, we do not intend to popularize science, we do not think that there is any benefit whatsoever in dumbing it down. The universal principles that propel science do not have “simplified” versions in Nature: they are already in their simplest and most elegant form.

Silvia Scaravaggi: There fertile areas more than others for this kind of research?

Evelina & Dmitry: On the one hand, we get a lot of support from the scientific community. Due to the tremendous costs of developing formerly non-existent scientific equipment, our work simply could not come into being without the generosity of our scientific colleagues. We also find more and more support through art exhibitions, festivals and grants, but quite often the technical and thematic demands of our work do not correspond to the parameters of such institutions (even those that are associated with so called “new media”).