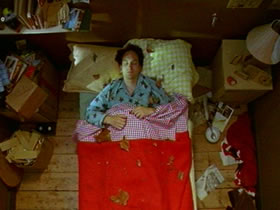 The new short forms of audiovisual communication live nowadays continuous contaminations of genres and shapes. If we observe short movies and music videos we can see happily that separation between genres is not so defined.

Often in some short movies music becomes so important that dialogues vanish on the background, or on the other hand in music videos happens that suddenly dialogues cover music becoming sharp. Consciousness of the existence of this new field of short forms, called music shorts, in between short film and music video, has lead the innovatory online channel BBC film network to the launching of a winning and compelling initiative. The saying that appears on the webpage is ‘We have the music, now you make the film’ and it expresses perfectly the idea. So, last summer the different involved situations such as BBC Film Network, BBC New Talent and BBC Electric Proms, got together to launch a competition that offered as prize the possibility for the winner to realize his own idea for a video.

I had the possibility to ask to the Senior Producer of BBC Film Network, Claire Cook, to explain us how things moved on, but first of all to understand what BBC Film Network is.

Recently Film Network has started offering films as hi-resolution downloads with digital rights-management. The site currently receives 100,000 visitors per month and has 8,000 registered members. The site launched in 2005 initially as a BBC trial.

Alessandra Migani: How the idea of the New Music Shorts competition came about?

Claire Cook: BBC Film Network, BBC New Talent and BBC Electric Proms challenged new Filmmakers, in summer 2006 to submit ideas for new music shorts, inspired by tracks supplied by leading independent record labels Ninja Tune, Warp Records and 679 Recordings. We thought this was a bit of a new area for short filmmaking, which we wanted to explore this developing genre a little further. The tracks included songs by M Craft, Grizzly Bear, Zero dB, and Pop Levi. The filmmakers had the opportunity to win a commission, a budget of up to £5,000 and the chance to work with Warp Films to produce their shorts.

From over 300 entries, five original commissions were selected. The talented filmmakers awarded commissions for the 2006 New Music Shorts are: Gemma Birditt, Simon Burrill, Joe Tumner, Alexander Turvey and Georgina Wu. These films were freshly finished in time to receive their world premiere at the Electric Proms on Thursday 26th Oct at the Camden Roundhouse. BBC Film Network is now premiering the films online at www.bbc.co.uk/dna/filmnetwork/newmusicshorts and has embarked on a UK festival tour.

Alessandra Migani: There are different realities involved in the project from BBC Film Network, BBC Electric Proms and BBC New Talent, Warp Films to some independent record labels. From your experience do you think we are in front of a new way to commission short films/music videos?

Claire Cook: This was a first time for us, but we wanted to broker new productions with ‘untried’ talent by using our contacts in the industry and trying to get them involved. The Indie record labels in this project wanted to work on a project that involved new talent both on a film and musical level, whereas we were keen to explore the merging of music videos with narrative film. Of course, it wont replace what is already working in the industry, but it hopefully provides a good stepping stone to bigger, commercial and music projects for the filmmakers involved.

Alessandra Migani: What is the difference between making a music video and a music films like those one?

Claire Cook: Our brief was to create a film inspired by the music, so the platform was not there simply to promote the band or musician involved. The filmmakers were totally free to create their own ideas, without prerequisites eg use this colour, do this band close up. The labels were very supportive of this and seemed to appreciate the end results.

Alessandra Migani: You selected five Directors. What sort of background did they have? Did they easily cope with the budget you were given to?

Claire Cook: We commissioned Warp Films to produce the 5 films in a very short time period (6 weeks for all 5). Their expertise and support was necessary in the fast and professional delivery of the films, plus it helped the filmmakers to make more out of the rather modest budgets. Some filmmakers had more experience than others in production, so needed Warp to help them on various levels. For example, Georgina Wu is still a student at the RCA and this was her first film, but her style and sense of humour shines through her film that perfectly suits the track for Pop Levi. Simon Burrill had made shorts but this was his first music project. The idea was to find people with talent who wished to develop their experience with the help of the scheme and production partners involved. We are very happy with the results and hope to be able to continue the scheme.