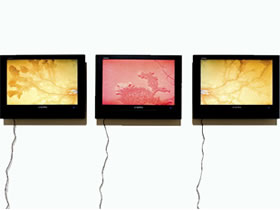 Art and nature have always hooked on. The two divines contend the primacy of the creation of the forms. And it matters! The first one is the mother of the artificial forms, the other one has obviously the natural forms. We all know that. Or maybe not? Is it still valid this honest separation of roles?

A group of artists from NY reflects on the question and, using sophisticated technologies, answers no. machines animated by phototropism, living micro systems, hydroponics environments, the lysergic growing of mould. The electronic art doesn’t want to represent the natural world, but also imitate its processes. This is Networked Nature , a collective exhibition of artists that work in a network and reflect on the importance of a definition between the human and the nature. They mix politic and commitment, new technologies and the collaborative and unanimous spirit of the Net.

They are guest from the 11 th January to the 18 th February at the New Museum of Contemporary Art of New York . The show is realized by Rhizome . The artists are C5, Futurefarmers, Shih-Chieh Huang, Philip Ross, Stephen Vitiello and Gail Wight. Let’s know all of them and all of their works.

Photosynthesis Robot is a three-dimensional model of a possible machine with a perpetual movement, that utilizes the phototropism phenomenon, the movement of the plants guided by the movement of the sun. Should we watering it? Probably no. The work is by Futurefarmers.

Inspired by the vegetal world, Juniors is the work of Philip Ross , an artist from San Francisco. “Juniors” is an hydroponics environment, big fun for every plant in reality, as Juniors is more all-loving than a mother. The system can control the quantity of light and water the vegetal needs. Could nature do better than that?

Din Don I is a complete living micro system, work realized by Shih-Chieh Huang. To realize this work, the artist mixed his data in electronic, robotic, computational physic. The result, guided by the deep knowledge of organic systems, is a block of electricity and air. A demiurgic artist?

More aesthetic and less technique, we’re talking now of Creep, work by Oakland Gail Wight, an hypnotic video on three screens that shows the growing of a coloured mould. The different levels of the life of the mould are filtered by fluorescent colours; the sequences run with a logic based on the colour. The result is extremely beautiful, even if the protagonist of this wonder is some mould. This time art doesn’t want to imitate a natural process, rather exalt its beauty.

Ironic, and not very politically correct, Hedera by Stephen Vitello, artist from Virginia. Inside a climber plant the artist put some speakers, from whom you can listen a private conversation between the discussed president George W. Bush and Tony Blair. The conversation is accompanied by percussions. In this case the plant is a metaphor of the political and international questions consumed in the ground cover.

Out of the vegetal world, the last work of the exhibition is Perfect View, made by the collective C5 of San Jose . It puts the accent on a different modality of relation with the landscape, through the use of new technologies and in particular the GPS system.

Using the collaborative spirit of the digital underground culture, the collective worked on the concept of sublime visual. Thanks to the coordinates offered by the community, a member of the collective travelled for 13.000 miles on a motorbike to photograph the latitudes and longitudes corresponding to the ones provided. The result is a block of views of the category of the sublime, depending on each of them. The network is in the end a benefit. The nature in electronic vitro, it’s up to you.