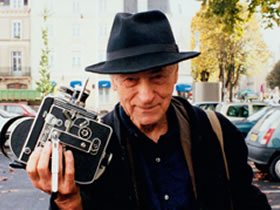 Jonas Mekas says about his films that they are linear and horizontal, that there’s a past and a present and it deals with mostly stolen moments from his everyday life, friends, places and discussions. There’s no solution of continuity between one video and another, the only link is himself who decides to switch on the video camera following the instantaneous impetus without an exact plan and then he selects them, he establishes the possible assemblage and he defines the sequence.

He assembles them, breaks its simplicity and makes them not linear. And it is because, like in real life, the most part of the actions hasn’t got a precise reason, it is simply a question of instinct. The same instinct that in the 50s makes him stop in New York (coming from Europe with his brother) instead of going on with the travel for Chicago . If he had gone on, he said once, he would have become simply a good baker.

In New York he stays for the rest of his life. Mekas, 84, of Lithuanian origin, filmmakers and also poet, creator of the Anthology Film Archives and of the magazine Film culture, reviewer for the Village Voice, keeps on looking at the present. Beyond having cared an installation of 40 of his short films at the Maya Stendhal Gallery of New York, he has organized the publication of his site ( www.jonasmekas.com ) so that they can be downloaded on the pc or on another multimedia reader such as Ipod. The installation in the gallery, realized with the material of his famous Video Diari, was installed so that the audience is surrounded with different screens and submerged in recollection videos projected in groups in loop.

And not only: from 1 st January other short films are available on the site with the same modality; they will be adding every day for a year. They are 365 little celebrations of the “light” cinema, not linked to narrative bonds: video portraits poems for images, sketch, and songs in 8mm. The inspiration? It is Petrarca and his Canzoniere made up by 366 compositions dedicated to the beloved woman Laura.

A new fragment of world emerges every day on the web site, selected by Mekas following the impetus of the moment: the dedication of the project, a tribute to Susan Sontag who re-emerges from the past, a visit at the castle of the marquees de Sade in Provence, the meeting with a blind photographer in Paris, track down a sentimental travel in the space and time. Mekas invited also other filmmakers like Jim Jarmush, Wim Wenders, Abel Ferrara to take part with their contributions.

The project is just started and, as always, there’s no certain plan; there’s only a healthy passion for the world. It is not so bad for a missed baker.