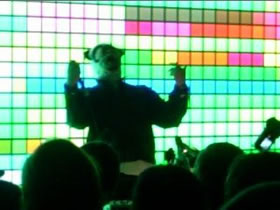 If your first love has been Pong , and not the girl or boy next door; if your childhood physical activity was taking Mario from a platform to another; if you brought your Game Boy with you to the toilet to get to the next level of Donkey Kong ; if you answered yes, the Blip Festival is for you.

Organized by the Newyorker association The tank and by the collective 8bitpeoples , defined by someone the ” Woodstock of the Chip Music” , the festival is a celebration of the old electronic world and its infinite, unexpected elaboration with the actual one. Forty artists from all over the world came to this kermesse of the low-bit art that brings back instruments of the past  from the Game Boy to the Atari, through the never forgot Commodore64  and creates sound and visual performances.

Modified cartridges, essential graphics and re-configured sound chip  simple and primary elements if compared with the nowadays possibilities, but extremely ductile and incredibly fertile if in the right hands  they’ve been the starting point for every artist that re-elaborated its digital childhood. 8-bit-rhythms became the start for electro-techno-house or rock music, in parallel with visual made of squared images of primary colours.

Special guest was certainly The Super Mario Movie (2005) by Cory Arcangel and the collective Paper Rad : the code of the original game has been written to obtain a video in the world of Mario, pointed by text screens that narrate his history, as the old muted movies.

The list of the artist was huge and not only they represent the international 8bit production, but they even give a reference frame of the various result. The game boy is the inspirer of many of them. From Nullsleep that mix themes to electro-pop melodies searching for new sound, to BitShifter that push the limits of a medium erroneously considered limited. Minimalism is the keyword for compositions Bubblyfish , Korean sound artist with a classical background. You can listen the techno of Aonami (matchless with his panda mask) and even the cartoon pop-rock of the Nippon-Hispanic duo Pepino , from the ballade of The Depreciation Guild to the folktronic by Mark DeNardo.

On the visual versant, artists such as noteNdo or C-Men start directly from the console to mix old fashion images, while Voltage Controlled and C-TRL Labs have more personal graphics, by the algometric geometries of the first to the 3D elaboration of the second.

A “labour of love”, this festival, celebrated even on the presence side, to demonstrate that the bit art scene in general, long from a residue of the past or a hobby for nostalgic, has lot to say.