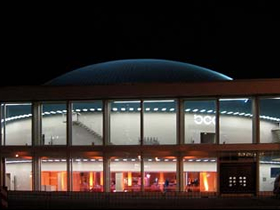 The second edition of Avit C23 took place in Berlin from the 27 th to the 30 of January together with the 23 rd annual hacking conference: Computer Chaos Conference. The event, organised by the new association Visual Berlin, gathering from less than a year, video artists active locally, configured as an exchange moment between European realities (and not only) active within visual experimentation and as a confrontation with the wide “computer addicted” community gathered in Berlin on the occasion of the Chaos Conference.

Central location of the event Art & Beauty Area of Bcc, congress centre located on the heart of the Alexander Platz, which housed Avit’s Vying showcases and dozens of Computer Conference workshops, devoted to computer culture and hacking. Near BBC, M12 was selected as the second location for Avit, housing in the afternoon readings and showcases, and in the night audio-video showcases by the protagonists of the festival.

M12 is one of the historical locations of the Berlin visual scene, an experimental platform managed by the collective Visomat.inc. Visomat.inc born at the beginning of the 90’s with the will to make media art and club culture meet, to turn music into a visual product connoted by the relevance given by the audio production thanks to a capsizing of the canonical relation between music and video imposed by minimal electronics.

After years working in the field of visual experimentation, Visomat focused on the creation of a space giving the opportunity to music and Berlin visual artists to expose to the public their work. Their present project, M12, was conceived this way, an atypical club, located within the Alexander Platz Shopping Centre, conceived with the aim to make the point on trends and evolutions in the field of in motion images and audio research and to represent a point of reference for musical and visual artists.

On the occasion of Avit, M12 has represented a moment of meeting and confrontation comfortable and cosy, where local and foreigner VJs gathered to discuss and perform in a familiar and relaxed atmosphere. During the show, 50 artists coming from all over the world had the opportunity to perform their showcases and it represented an open interchange on what Vying is and on how this scene is growing in Europe.

A meeting, coordinated by AVIT creators, took place on the last day of Avit C23, to make the point of the situation on the activity of European portals and on the possibility to create a single platform gathering worldwide users’ contributions through the archiving of news and information in a blog and a forum opened to everybody.

Recently dozens of local associations have formed: associations made up of video artists with different origins, who gathered their forces to communicate and promote what revolves around the Vying’ world, their activities and their productions. In Great Britain the biggest syndication is AVIT Uk, community born from the international VJforums.com.

Avit activity aims at promoting and producing events connected to VJ Culture and the elevation of Vying into a different form of art. AVIT has chosen to export its format and after different English editions of the AVITUK festival, in Brighton and Birmingham, turned into a trademark and has brought new European festivals labelled AVIT to life, in collaboration with other local associations.

It is the case of AVIT Berlin, conceived thanks to the collaboration between AVIT network and Visual Berlin, and AVIT France, which will be in Paris on next 21 st and 22 nd of January events within which AVIT brings its philosophy and ideals.

Visual Berlin is a video artists and Berlin VJs community committed in the perpetual interchange of experience with the international and national scene, beyond the research on contents and expressive modalities of Vying. Each month the network organises a meeting named VJ Stammtish (VJ Regular Table), where local visual artists can gather to discuss and prove, in contact and confrontation with others’ work. Each meeting ends with an open Jam Session where passionate people can expose their works.

Visual Berlin approach, and somehow Avit’s, have the privilege to be laboratorial, in such a way as to emphasize what should be researched and on the contrary is not present in a blooming of festivals and events caring just for the audio-video final product; the improvising soul, so interesting and unique, Vying owns.