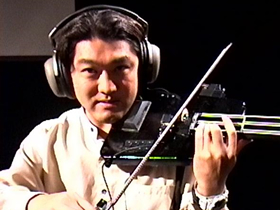 The Milanese meeting with Suguru Goto at the end of November 2006 (on the 27 th concert at Teatro Arsenale , organised by the Federation of electronic music in Italy and the day after the workshop at the Accademia Internazionale della Musica ) showed the subtle charm of this artist (Digimag devoted an article to him in its 12 th number with an interview by Elena Vairani: http://www.digicult.it/digimag/article.asp?id=312 .

I could follow both moments in Milan , but I would like to analyse the workshop in particular, as the more informal and relaxed meeting of the second day proved to be a further key to understand not only the technologies used and explained, but, especially the path of the artist. Suguru started his workshop with a technical description of SuperPolm, a sort of controller violin which is mute, used for interface gathering the performer’s gesture to guide sound generators (defined in MAX -MSP ). The “violin” shape, the resistances variable to the touch, light switches, pressure and position sensors are used for communicating the musical gesture.

With BodySuite, instead, the tool becomes “wearable”, the gesture is no longer simply musical (you mustn’t forget that Goto is a composer for formation and member of the academic school Irkam in Paris ).The score of sensors trace movements: the corners described by the performer’s body. Suguru says it isn’t enough to make of it a dance, even if a dancer could use it and pilot sounds and images.

The performer through this movement explores for himself and the spectator too a series of worlds and places. More than narrating facts or emotions, his attention is focused on making the perception of those places possible. The fact of not focusing on emotion is not turning towards the “not human”, but it is a Zen approach through perception (at the end of ourselves). Image and sound are not in descriptive and rigid relation to gesture. Often relations are shifted in time, for instance through slow entanglements on sounds. The ambiguity of those worlds constitutes its charm.

Suguru Goto ‘s work isn’t free form, chaotic, but it uses tension between the project structure and indeterminacy related to the player and the answer to synthesis algorithms. In SuperPolm is visible the gesture the performer uses to select scenes (to be meant even as a group of audio and video synthesis algorithms) in different modulations. The performer, in the case of BodySuite, doesn’t know the code logics, but it explores and learns from experience.

Suguru isn’t very interested in technical development. On the stage he brings with him what is strictly necessary: laptops, some control pedals, an old anagogic-digital interface IRCAM. There is much more in many not professional DJs ‘bags. The tool is necessary as exploration tool of new perception ways. Perception means to be there and perceive through the senses, not only through hearing or sight, a reason more why Suguru isn’t interested in recordings (in fact he doesn’t issue CDs).

The passage to robotic music occurs through a paradoxical inversion: the gesture becomes controlled. Chances change. Suguru, the composer, is fascinated by the possibility to conceive and accomplish “inhuman” scores, difficult to be performed by musicians. A robot’s ability to repeat the same gesture with the same intensity for hours and days, the possibility to follow particularly complex scores, even rhythmically, opens a further space to research.

Even human perception is influenced by it. The mechanical repetition is mechanical just in the generation, but then the listening changes with time. Zen influences evident in this passage, but even bio-electronic and neurological knowledge confirm this intuition (but even rave experience has this component in the mysticism of tr909 ).

In the recent works, instead, tension originates from confrontation. The body becomes “augmented body” or “virtual body” ; the performer is sometimes guided by the machine, even mechanically (as in some works by Marcel Lì Antunez ).The show is never narrative, but it moves through these energies, tensions, trying to understand where are, if there are, limits. At the end it is a problem of identity, of definition of the limit between human and not human.

To explore new spaces tools are needed (not just hw-sw): the second part of the day was devoted to an introduction to Max-Msp, Suguru’s favourite development environment (and by many other experimenters). The idea at the base is that this development environment allows the creation of virtual instruments. Normal commercial audios sw (Logic, Cubase, Ableton Live) actually follow rigidly some paradigms, precise ways to conceive sound and music. Environments which persons like Suguru are undoubtedly not interested in.