Resistant Maps Between Net And Art 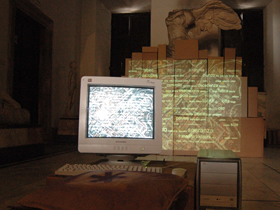 The intents of the directors was to collect a general vision of a certain production between art and activism about the cartography. In a vast and rather relative meaning, the exhibition is about the transformations of the contemporary landscape, developing forms of critic representations of the power relations in the ambit of the global capitalism, without the omission of an historical vision of the influences that signed this production. Works by Giuseppe Chiari , Vincenzo Agnetti and the movie by Guy Debord , “In girum imus nocte et consumimur igni “, accompany the installations of 01.org, Cartografia Resistente and Les Flottants.

The three presented their works. The duo 01.org presented an installation obtained constantly mapping their movements with the GPS for a year and giving back the cartographic database. The work of Les Flottants is a geo-blog where, through a series of territorial tags, they rebuilt the path of the manifestations during Genoa 2001, connecting to the different locations a series of key words. Words that are reproduced on a screen with variable dimension depending on the frequency of their use, creating clouds of concepts in the middle of events and locations.

The collective Cartografia Resistente from Florence presented Triangolazione , a sequence of three drifting made in the north suburbs of the city, of whom the participants recomposed the narration through the website www.cartografiaresistente.org , that collect written impressions, photos and sounds. Then the group selected images, texts and graphic elaborations for its installation. The project, even with its artistic sensitivity, substantially proposes the development of a politic instrument to describe the territory from the bottom and Open Source.

During the days, the convention dealt an enormous succession of critic analysis and strategic testimonies, creating continuous and interesting connection between apparently distant arguments and practices, but related by the common exigency to cartography an emerging net geography.

The first day the interventions of Nicola Bucci, Sandro Ricaldone and Tommaso Tozzi helped focus the vastness of the influences area, from the philosophic thought of this century to the role of the historic avant-gardes, from the panorama of the emotional and mental cartographies to the paradigms of the net art. Raffaele Scelsi evoked the fundamental experience of Decoder in parting the Italian cultural panorama on the exploration of the cyber-geography.

Andrea Natella presented last Guerrilla Marketing project, Roman “society” that uses the marketing strategies as instrument of revelation on power mechanism, and the site Where-next , where it is possible to bet on the next terrorist attack location. Massimiliano Menconi presented WikiArtPedia , database of art from the encyclopaedic character, developed by the Accademia di Belle Arti of C arrara , even as Arturo Di Corinto was the speaking-tube of Open Polis Community , a system that allows the access on 140.000 politics elected in Italy and increment more than link further information, once again using diffused and opened practices.

Among the most passionate and fascinating interventions Vittore Baroni , cornerstone figure of the Italian contra-cultures from the 80’s to nowadays, who proposed a reconstruction of the mail art practice, accompanied by a series of graphic works, maps, diagrams and other representations that tried to teach new form and modality of relation in the artistic action area, tracing a captivating map of relations between the most variegate figures from Maciunas to Harry Smith , from Fluxus to Luther Blisset , from the project Trax to the creation of NSK by Llaibach . The intervention of Baroni clearly underlined how the mail art anticipated during the pre-digital era the insurrection of net-art paradigms.

The convention closed with the intervention of Brian Holmes , Californian from Paris ction area, tracing a fascinating map of relations between the most variegate , collaborator of Bureau D’Etudes , who faced up to the theme of the new geography produced by the nets, individuated as the dominant structure of the cultural, economic and military power. Holmes introduced his intervention citing Frederic Jameson who incited an “aesthetic of the cognitive mapping” during the first 80’s to resolve the inability of our brains to map the multinational global net and the global decentralization of the communication in which we as individual subjects are trapped.

During a close exposition, he presented examples of maps collocated in a vast area, organized in four cardinal points, maps of power in opposition to swarm map, maps of dissemination in opposition to maps of constitution. On one side representations that explicate complex nodes of relations that structure the dominant processes of the economy and military power, as in the case of the famous maps by Bureau D’Etudes on World Government . on the other side the auto-organization that produces massive effects real time, as described by Howard Rheingold.

Least but not last, a sharp intervention out of program by Antonio Caronia that suggested an ulterior thematic opening on the temporal dimension as aspect to deepen in the lecture of a complex reality of the network society. effects real time, as described by Howard Rheingold.