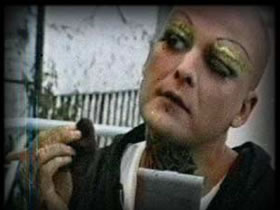 Pixxelpoint was born in Nova Gorica ( Slovenia ) in 2000. It grew up during the years to the point of trespassing the borders and incorporating (from 2005) a series of events managed by the Dams of Gorizia . It is now at its seventh edition and Pixxelpoint it is not one of the digital arts festivals spread all around the world.

In fact the initiative positively lives and reflects all the contradictions of living on a frontier that was, only few years ago, an Iron Curtain that is now slowly collapsing, making closer two country different in history, culture and digital interests. It is a unique experience to jump here and there from the border to follow events that develop rather near to each other, giving to the festival an unmistakable atmosphere.

This edition, intituled Dresscode , presented, according to the manager Igor Spaniol , “work that deals with the formal, aesthetic and socio-cultural aspects of the digital media and will critically debate key events at the intersection of fashion and new media technology”. “As every year, a selection of projects presented in answer to an international “call” (at the Mostovna centre) has been put beside a show of artists invited for the occasion (at the Mestna Galerija of Nova Gorica ).

Vuk Cosic and Matej Andra Vogrincic have presented a new project of incredible efficiency, History Homme (2006). The two play the role of founders of a fashion house, the History, dedicated to study and reproduce the dresses wore by the protagonists of some important moment of the modern history o each other. each other. jump here and there from the border to follow events that develop , in the conviction of a relation between the “great history” and the fashion culture. The result is 4 works (one for each season) that put together the photos of some key moments of the recent history and fragments of the fabric wore by the protagonists. The winter collection, for example, proposes the materials wore by Churchill, Roosevelt and Stalin at the Yalta conference in 1943, while the summer collection offers the famous shoot of Eddie Adams from the Vietcong killed by a policeman in 1968.

The video of the operation Daspu is another interesting work , realized by Tadej Pogacar and the Brazilian collective CODE :RED in occasion of the 27th Biennale of Sao Paulo. Daspu is a real fashion home managed by prostitutes, who’s having lots of success in Brazil and who’s attracting the attention of the media. Presenting these works inside their shows, CODE :RED wants to explore the world of the prostitution and the different economic forms that took place in it. Therefore it couldn’t lack the work of Regina Möller , that produces, since the late 90’s, embodiment and a fashion review ( regina ) as art works, reflecting on the construction of the female identity and on the cultural constructs on which fashion and arts are based.

On the Italian side, the event organized by the Gorizia DAMS was called this year Pixxelmusic , with the intent to partially release from the annual themes of the festival and build a sort of observatory about the relationships between music and moving images, from the origin of the movie up to now. The 29 th November opened with a projection organized by the students, who reflected on the relation between cinema and music from Melies to Chris Cunningham, playing live music during the screening.

Among the participation of the afternoon, moderated by Cristiano Poian , Paolo Peverini stopped on the mash-up gender and the transformations that it’s introducing in the videoclip , while the Slovenian Marko Milosavljevic and Saa avel reflected on the artistic dignity of the music video. Saa noticed how, in the Slovenian production of the 80’s and 90’s, the videoclip sudden became an artistic genre, involving video artists and performers from the same underground reality of the music band and refusing the status of “commercial” attributed to the videoclip on its origins. Between the examples cited by the avel , we signal the videos of BAST realized by Davide Grassi , in particular Ron’s Story (2002), the documentation of a performance of the American Ron Athey .

The works of the artists presents during the opening have been a revelation. The Dutch Ries Straver showed a selection of his videos, from Fuck Television (transmitted by Blob as well) to a series of reflections about the analogic or digital error ( Plugin Out and Colorbars ) to Crocodiles in Venice (2005), the trailer of a fake Hollywood disaster movie where Venice is invaded by crocodiles. Stravers’s video moves between art, advertising aesthetic and videoclip , making different communication codes collapse and privileging alternative way of communication.

The late afternoon has been dedicated to the movie director Roberto Nanni , who’s working in a rigorous manner, characterized by the use of the Super8. Nanni projected L’amore vincitore , Conversation with Derek Jarman (1993), an interview with the director of Blue little before his death, and a movie inspired to Steve Brown , pianist of the Tuxedomoon  whose videos where directed by Nanni . An intimate and lyric narration, as Nanni works with great patience on the postproduction of the image and tries constantly to make it depend on the sound flux.

The night ended at the Fly club, where Scuola Furano and IRDP played, followed by Spiller and Putch1 . Nothing exceptional, but the Pixxelmusic theory has been demonstrated: the relation between sound and image continues, and it’s living one of its greatest moments…