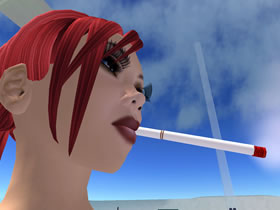 In the balance between references at the pop culture and digressions in virtual worlds, this is the new project of the 0100101110101101.org (that is Eva and Franco Mattes) the 13 most beautiful Avatars.

Presented yesterday online by Ars Virtua and by Rhizome and on parade with a series of digital printings at the Italian Academy of the Columbia University in New York, 13 most beautiful avatars has as declared references the 13 most beautiful boys and 13 most beautiful women 2 videos in 16mm of Andy Warhol where the protagonist must only “exist” in their beautiful, in front of the cine camera which will immortalize their sex appeal. The same artist pointed out that the realization of the videos was “easier than painting. The cine camera has an engine. You simply switch on it and then you can go away.”

The preliminaries seem the same for the avatars of 01.org: they are special only because their unreal existence digitally produced specially for the user of the exhibition and obtained choosing among a series of features given not by the nature but by the mind of a programmer. The choice to use a platform like Second Life which in this moment is a phenomenon which comes to the fore of all the medias (also the most generalist ones) reflects maybe the programmatic choice to explore more popular tools of communication but it results less radical and polemical that other projects of the pair, used to media actions which are more powerful and insolent.

The series of portraits (product of the frequentation of the areas of Second Life for a whole year) imitate the modalities of every else exhibition and its virtual counterpart exists only inside of Second Life itself, where were created a reproduction of the gallery, of the Italian Academy . To visit it, it is necessary to join the community of Second Life, to create the nth avatar and to explore this virtual world as the 01.org made while the digital portraits imitate the aesthetics of the 3d graphics of the videogames, with vivid colours and serial landscapes.

Yet, beyond the easy play of mirrors and cultural references, the doubt of “light” and vague research remains, where it misses a real “lived” of the artist. Such as the models of Warhol, the portraits are in some way impersonal creations of the virtual world, where the authors say to having spent time without wanting intervene if not to recreate a real space.

The world of Second Life is become at this point a phenomenon of habit (even if not yet of mass) would have deserved a sincere scoff, or a huge mockery, a memorable reversal and not an aseptic reproduction. For that it is enough to switch on a video camera.