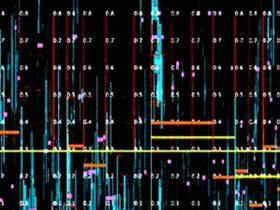 I attended Playing Music a few months ago, in a small theatre near Livorno . I arrived late, missing  as I was later told  the introduction. What I saw was two guys, each standing in front of a console with 6 numbered infra-red sensors, which, alternatively, through a movement of the hand towards them, activated short and suggestive sound-events, each of which corresponded to (in a big screen placed in front of them) a specific number of a 6×6 numeric matrix.

At the end, each sound-event seemed to score a certain number of points. The music, which filled the theatre in quick but intense bursts, alternated with silence, in a dialogue that seemed to somewhat set the pace of strategic thought. After about fifteen minutes the concert reached its conclusion with a winner. The audience, suspended between surprise and curiosity, started to wonder about the rules of the game, and eventually the desire to experiment won over shyness. More performances followed, but at that point from simple listeners we had become passionate players and performers of the opera.

Davide Morelli computer-expert and sax player, and Marco Liuni , mathematician and guitarist, both sharing a great passion for contemporary and electronic music, have developed this interactive installation. Their work was inspired by Iannis Xenakis , a recently deceased composer who, in 1958, created Duel , an opera for two orchestras and two directors, where the Mathematical Theory of Games structured a concert with an endless array of performance possibilities.

Now, in full digital era, and in a time of artificial intelligence, a computer takes the place of the orchestra, a sure sign that the technological revolution cannot shy away from investing in contemporary musical research. I met with Davide Morelli and Marco Liuni, as I tried to understand, through this and more projects, their approach to musical research. Interactivity, as we will see, is the essential, or almost shaping, element.

Giulia Simi: Both have a scientific background and a musical education. The same is true about a number of great composers of contemporary music, like Pierre Shaeffer, Pierre Boulez, and Iannis Xenakis, just to mention a few. Why do you think that is? How does a scientific approach contribute to contemporary music?

Davide: We are both “scientists” and musicians, so for us it’s quite natural to bring these two worlds together, though they are apparently so different. For me a scientific approach in the creation of one’s own musical alphabet means above all control. It means knowing where you come from and where you are going, which is fundamental for our specific historic moment, a time when everything has already been done, and composers can do anything they want, from going back to tonality to experimenting with pure noise. Having too many choices has a paralyzing effect, so we took small steps: we created our own sounds using different methods of synthesis and sampling (mainly with the software C sound ), and created interfaces to pilot our sounds, by connecting infrared sensors to the computer (through the software Pure Data ).

Marco: The way I see it, scientific thinking and music share the use of theoretical models, translating them into objects. Some of them are concrete results, others are more abstract – such as in the case of math. In music every object you deal with is a sound-event, a hybrid entity, because, though endowed with a physical essence, the way they are perceived concerns absolutely intangible aspects, such as the sensitivity and the personality of listeners. Hence the conceptual possibility of handling sounds as if they were entities on which could be applied laws that are apparently distant from the music sphere. In our case, in Playing Music , the sound-events are interpreted as moves in a two-player game, and are then treated as elements of a “space” which is shaped through the Mathematical Theory of Games.

If scientific thought has always been at the root of musical practice, that’s because it represents a solid base and a useful instrument. Contemporary music, in particular, which often chooses to abandon standard patterns of musical compositions and their make-up material, finds in scientific models and laws the inspiration for new, coherent compositional and creative methods. This is the perspective which I find most interesting, as opposed to more dogmatic drifts that link the value of a musical composition to the elegance of the law or the process that determines its structure and articulation. The choice to follow Xenakis’s idea of applying the Mathematical Theory of Games to music, which David and I employ in Playing Music , is just the result of the conviction that the Theory represents a powerful expressive potential, which can translate into a different understanding of the structure of musical compositions and audience involvement.

Giulia Simi: Your work is almost entirely oriented towards interactivity, making use of the huge possibilities offered by digital technologies. Do you think that this kind of interactivity may be considered a sort of continuation of that current of contemporary music that is called “aleatory”, which, in a way, leaves ample room for interpretative and executive “freedom”? In other words, can you say that digital technology has defined, or given a physical representation to something that has been tried before, that is, involving listeners, making them almost co-authors of the composition?

Marco: Generally the expression “aleatory music” is used when there is an intervention of a casual process of some kind in the composition of an opera, whether it be throwing the dice, like Cage did, or applying probability theories, as Xenakis did. The aspect you refer to, to which I think you gave a perfect explanation, is the indetermination of a work, that is, the fact that a composer creates the structure of a work anticipating the possibility that the performer will make arbitrary choices when he will play it. The sound material is thus not necessarily an aleatory composition, yet it contemplates some freedom of choice for performers. In this sense digital technologies, and hence the possibility to create multifunctional, user-friendly interfaces, give us a chance to greatly expand the possible intervention of the player and the audience in the performance of the musical piece. In Playing Music this aspect is brought to an extreme: the fact that music is originated from a rather easy game, and the infra-red console used to control the software is very easy to figure out, make it so that the audience takes the role of the performer. The participation of the audience is not an accessory, but it is rather necessary. The composition exists only if two players decide to start the game.

Giulia Simi: In Playing Music, the playful aspect of listening to music takes the foreground, so much as to overpower the content of the installation, which becomes, as you intended, a mere variable, almost secondary. The game-structure is like a work of art in and of itself. Why this attraction to games, and what developments do you think it may have in stimulating sound perception?

Marco: Playing games is an intimate necessity for the human being, and this constitutes an interesting aspect in the music field, in two distinct ways. Firstly, the fact that someone can be called up to play a game releases most of the inhibitions that a listener of a musical performance may have towards participating. One thing is trying to get a member of the audience to improvise with a musical instrument, but asking them to play a game is different. In this way, if the game and the musical material are well-designed, the musical flow is enhanced by the contribution given by each player: through the choice of a personal strategy, but also through the mistakes he makes. Secondarily, the fact that Playing Music is a game based on recognizing sound-events, makes it a possible teaching tool of the musical language. In this sense focusing on the playful aspect may eliminate the difficulties and dislike of going through listening exercises, which can often be frustrating, especially for children.

Playing Music is for us a first step towards the objective of creating interactive musical software, focused on listening, where the hearing perception determine the evolution of the interaction. On this subject we chose to use infra-reds for Playing Music’s interface, to make the interaction with the software as natural as possible, by simply reaching out a hand in a given direction. To make Playing Music a tool that anyone can use, we also wanted to make the entire mechanism that runs the game to be freely reproducible and usable: the program is based on the open-source software Pure Data, and the Arduino card (which transforms the sensors’ signals into digital messages transferred via USB) can be built using the specifications published online by the builder, or simply bought at a very affordable price.

Giulia Simi: In one of your performances you stage an unlikely but fascinating man-machine musical improvisation: Davide, with his saxophone, improvises on a few musical themes, runtime-generated by the computer. We can’t help but think of a sort of cyber-jazz. How does jazz fit into your background, and what developments do you think it may have through these new technologies? Will Artificial Intelligence and Artificial Life techniques be part of this?

Davide: I deeply love jazz, but I am not a jazz-player. Jazz has a syntax that I don’t fully know, and which I never studied. What I share with jazz-players is the choice of improvisation and the idea of performances with structure that are not rigidly defined. The interaction you’re talking about is made possible by a software that I am developing as part of a research financed by Live Algorithms for Music Network, from London ‘s Goldsmiths College , and it consists in applying Artificial Intelligence techniques to musical improvisation. The most frequent use we make of this software is in improvising harmonies. In the first phase we teach the software the type of harmony we want, by simply playing a sequence of chords. MIDI messages are interpreted in chords, and so we create a memory of the transition probabilities from one chord to the next. After that, during the performance, we ask the software to create sequences of chords that follow the style it learned in the first phase. This allows us to play in concert on a harmonic base that changes every time, and evolves each time, but whose rules we know well because they follow our own personal style.

We are very interested in using all the potentials of the research I am conducting in London , particularly using Genetic Algorithms to create pattern variations (melodic, rhythmic, or harmonic). It’s an Artificial Life technique that simulates the evolution of a population of individuals whose chromosome make-out consists in a musical characteristic, and where, generation after generation, all chromosomes mix, creating unexpected and often unpredictable solutions. It’s especially interesting because it’s one of the few AI techniques that, more than giving answers, creates new information.

We are following the course we traced with Playing Music , trying to create musical games that are easy to use, but also with a sufficient complexity to allow us to create interesting musical structures. We want to surprise ourselves as we play, so we will further use the software I am developing for the London project. AI and AL can give huge stimuli in composing as well as while playing a musical piece. We can ask an algorithm to create, in real time, coherent structures through a base principle (like in autosimilar structures such as fractals’), using what I am playing with my instrument as starting material. In this sense AI is irreplaceable, because no human musician can improvise formally flawless structures with unrehearsed material. In any case all of this is for us a tool to create good music, which is always, in every moment, our main objective.