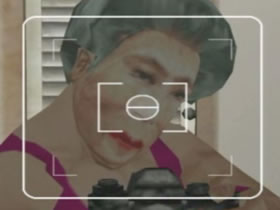 The widespread tendency to identify new technology with innovation, leads to a rather banal misunderstanding, according to which new media artists are all innovators. The artists able to use the tool in an innovative way are actually a few.

Eddo Stern is probably one of the few cases where both of the two preliminary remarks are actually fulfilled. Israeli living in Los Angeles, he recently attracted the audience’s attention with Dark Game (2006) , a videogame prototype where the two rivals are deprived of their sight: an experiment preceded by complex projects such as Tekken Torture Tournament (2001), a tournament of Tekken 3 in which the blows given by avatars were transferred to the players through electric shocks; Cockfight Arena (2001) , a performance in which the players controlled their avatar on the screen-a feathered devoted to fight against other cocks- with their own bodies disguised and sensors provided; Runners (1999  2000) , in which the player controls with the same movements of the mouse three different avatars in Everquest, selecting which one to rescue and which one to sacrifice.

On another side, Eddo Stern has experimented with video, carrying out some remarkable examples of machinima .

The first one, Sheik Attack, dates back 1999, but it had already an extraordinary maturity. The debate on the Zionist utopia, from the dream of rebuilding the state of Israel up to the current tragic situation, is told through a soundtrack of Israel traditional songs and the editing of a series of scenes shot in games such as Sim City , Delta Force, Command & Conquer. The low – resolution editing is in stark contrast to the strong emotive impact of the soundtrack, while Stern manages to transform the expressive limits of the tool, the repetitive nature of the gestures, the lack of dialogues and especially the first person shooter visual (which seems to give the spectator the responsibility of the protagonists’ actions- such as a prisoner assassinated point- blank- without having the opportunity to intervene) into a resource of the tool.

In Vietnam Romance , 2003, Stern uses plenty of fragments of shotings in different games inspired to the war in Vietnam to pay tribute to the correspondent (and lucky) cinematographic genre, from Apocalypse Now to Platoon: accomplice a soundtrack turning some famous hits of the Seventies into MIDIs , trying to evoke the feeling of nostalgia connecting to a war seen by many of us just through Hollywood. The opening scene is phenomenal, with a prostitute parading through desolated outskirts on the notes of These Boots by Nancy Sinatra, showing all her polygons.

Deathstar (2004) is a video in which violence-against a single body, Osama Bin Laden’s- is so close to seem abstract. The work edits a series of sequences shot in different games devoted to the assassination of the public enemy number one, together with Mel Gibson’s The Passion of the Christ soundtrack, as if trying to compare two different versions-and yet individually similar- of the media representation of death.

With Landlord Vigilante (2006) , his last machinima (in Monza up to the end of October), Stern seems to gather eventually the challenge of the creation of an individual psychology, defying once again the limits of the tool. In order to do it, he resorts to Jessica Hutchins ‘s collaboration, artist and writer, and gets inspiration from a real person, his ex-homeowner, a cynic and strong woman, who, driving a taxi in Los Angeles has been saving a good sum of money she used in order to buy some buildings to rent.

Persuaded that tenants are “defective human beings”, Leslie Shirley  a world she invented during the building of her credible and reassuring landlady character  she capitalizes on their dirt habits, trying to get the best from her investment, up to come to blows with Latin-American criminality ruling Los Angeles slums.

To give a credible context to this narration, Stern relies on GTA San Andreas urban sets and to The Sims when he needed to stage Leslie Shirley , her character is of a polite and obliging home owner living in a clean and tidy” country cottage”. In other words, according to Stern, machinima isn’t a sort of economic tool to shot a traditional movie in a virtual world, but a language provided with its own expressive potentialities the artist takes advantage of in order to build a narration.

The chapter “Mirrors” is a model on the matter. While Leslie Shirley tells her relationship with her body and the progressive building of her character (avatar?), Stern shoots her close-up, in front of a mirror while holding a camera as if it was a fusil and, pointing the sight at herself, she takes a picture of herself. Using the iconography of first person shooters, Eddo Stern illustrates a process (psychological) of deconstruction and construction of an identity, showing the expressive potentialities of a new language, but which is getting too rapidly used to mime old media.