About My Space Vjing 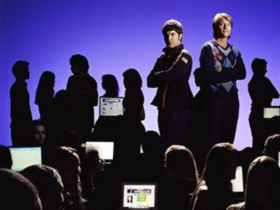 Recently, many newspapers have talked about it for many reasons. Users have expressed their opinion and complaints through forums and on-line magazines, so I asked myself what Myspace really was and what the people who gain from it think about it : musicians, DJ, VJ and filmmakers .

It can be a community, a web site devoted to social networking, a chat or, even, as it has been defined, a trap for teenagers, the end of privacy or an evolved form of self-promotion or spam, MySpace has, since the beginning, proposed itself as a social tool, choosing as its claim “a place for friends'”, focusing on friendship, one of the noblest and most personal feelings man has.

My research on MySpace started from the definition of Wikipedia – http://en.wikipedia.org/wiki/MySpace, defining MySpace as a social networking website offering an interactive, user-submitted network of friends, personal profiles, blogs, groups, photos, music, and videos and share all of it with other users, making friends and promoting yourself through an internal mailing system.

According to Wikepedia, it is currently the world’s fourth most popular English-language website, the sixth most popular website in any language, with a news story claiming 106 million accounts on September 2006.

According to BusinessWeek – http://www.businessweek.com/magazine/content/05_50/b3963001.htm, web sites as MySpace and its ancestor Buzz-Oven, help you set social identities, representing a place where creating a bit of interest around what people do really, creating a network of friendships and contacts which will be difficult to develop otherwise.

Since the beginning, MySpace has distinguished itself for being a true home for musicians, DJs, new singers, filmmakers and artists who, this way, could have a shot. Meanwhile, it has always been under strict observation as a privileged promotion channel for commercial interests, even if it is difficult for societies to approach this kind of network.

Questions like “Who’s MySpace?” and “Who’s Tom?” spring to mind to anyone who sign in MySpace, as his photo appears in your top-friends of your new account. There are two stories. According to the first one, Tom Anderson is a musician of Santa Monica-California, with a diploma in cinematographic art, who, in collaboration with Chris DeWolfe della Xdrive Inc. has planned a website in which musicians could interchange their music and fans could chat with their favourite artists. Anderson was responsible for music and cinema and had different friends in Hollywood , among which models, actors and musicians. He asked them to join the community. Within a year each star had his personal page on MySpace. After the success, come the interest of multinationals; up to become the phenomenon it represents now.

According to other sources, MySpace is Spam 2.0′s property and Tom Anderson is just a PR. A sort of mascot conceived to give an idea of familiarity to the web site of a society taking care of pop-up advertising, spam, spy ware etc. The majority of users believe MySpace was born because of Tom, while according to others MySpace is just a brilliant lie, a new form of evolved spam.

Conceived by, Chris DeWolfe , who, up to 2001 has been working for Xdrive Technologies Inc., Tom Anderson , the official face of MySpace, should be the copyeditor of the marketing department of DeWolfe’s society. The MySpace we know maybe was born in 2002 after the launch of Friendster , another successful social networking.

And there are many other pages listing what many web sites have reported as “what you didn’t know about MySpace”, http://www.banfacebook.com/myspace/what-you-did-not-know-about-myspace/ where you can find that it isn’t such a spontaneous success as it seems.

On the 15 th of September 2006 , PcWorld, which doesn’t love MySpace, put it at its first place in its classification for the worst websites of the world ( http://www.pcworld.com/article/id,127116-page,8-c,sites/article.html ) . I don’t want to focus neither on the economic aspect nor on issues related to it, nor to various disputes filling Us portals. http://www.consumeraffairs.com/news04/2006/06/ftc_myspace.html ), but rather analyse the potentialities of this networking for DJs and filmmakers, famous and not, who seem to capitalize MySpace’s services.

It seems it was the presence of celebrities one of the reasons of MySpace success. Meanwhile, its music session helped many artists to change their careers thanks to the popularity get. Or legends as, as it seem, for the case of the pop singer Lily Allen .

There are different books concerning MySpace ( http://ask-leo.com/store/Books/MySpace ). The Wall Street Journal announces the end and the abandon of it from many users owing to its success in a network too big and not too “personal”.

It is difficult to have a precise opinion on the matter, even after what we reported, because very often something created for an aim turns involuntarily into something different from the original idea and dealing with real persons, (as in this case) all is possible.

We have asked many musicians, DJs, VJs and filmmakers from all over the world their opinion and we will have their answers next week. We carried out a survey unique in its kind, for the first time in Italy directly from inside MySpace, in order to know in a direct way ideas and opinions, projects and vantages, strategies and dreams of a new generation of artists auto promoting and sharing their audio-video releases within internet.