The End Of Neverending Cinema 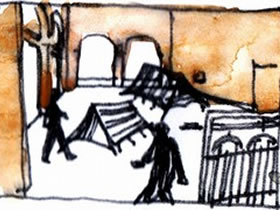 Here it is. From Settembre 28 to October 29 2006 the summer creative workshop where young artists, musicians, DJ’s and VJ’s have animated Trento’s Galleria Civica di Arte Contemporanea , turns into an actual showing, and all the experience gathered during these months are gathered in The End , an exhibit of the works thus realized.

Everything is orchestrated by performer Anna De Manincor of the Zimmerfrei group , who gave life to an experience she had never had before: transfer the whole process of artistic production inside a showing, and have some of the most significant contemporary artists “work” in close contact with each other. The Galleria thus becomes a place of creation and exposition. The museum  as the neutral space where works of art, designed to communicate, are kept and classified  is now expanded to a broader, relationship-based scale, a dialogic and dynamic context, embracing specific and transversal competences. In short, Trento ‘s Civic Gallery becomes the home of work-in-progress – shared, this time, with live spectators.

If “the eye is an organ that adds great distance “, this experience lies in the dark, where a thousands eyes and a thousands hands have “kneaded”, so to speak, the carefully chosen ingredients of their creative stay, sparing no energies, and overcoming all distinctions between high and low culture, showing how the model of transmission can lead to taking a step beyond traditional boundaries, as Baudelaire taught, in the rejection of every systematic character. Yet what we are seeing, here is “a system of art, reproducing the modern and productive mechanism of a factory” [Speroni, 1995 ], with the obvious differences and the many startling improvisations. Now this place is not merely a space to produce and create, but also a space to occupy and interpret, to revalue and control, to inhabit and invent.

What I deem as most important here is not so much the end-result of the artistic effort  which nevertheless fully deserves our attention, having fulfilled our expectations and being highly valuable  but rather the significance of this experiment which is both collective as well as individual. Highlighting the course of contemporary art set towards communication technologies that express devices that can reintegrate any kind of autonomous form: video, graphic art, and multimediality together with artistic performance have been the focus and the core of this experience. It all took place between artificial and natural, between art and function, between model and anti-model, before and after  an experience that led me to question whether nature and art – two reciprocally-generating values – may survive each other.

If art was born in Europe, and visual art in America ( Warhol ), Trento becomes, willing or not, the cradle of the connection between the spheres of graphic design and video, between aesthetics and economy. What we “demand” of Elisabetta Benassi , Corpicrudi or Adian Paci is merely to order their stereotypes in order to carry out a work of diffusion and stimulation. With audio-visual arts we can achieve results that less than a half a century ago were impossible to achieve. A performing art such as dance, in any case, has now shaken off its aura of courtesan nobility, democratically getting down towards us. Visual techniques, maybe, offer a new way for the world to mock us, and today art seems to only be engaged in concealing reality, and mask, through the disguise of the passing of time, its disappearance. Today everything seems to only aspire at being absorbed by life as much as by art. Thus, we go from ready-made to reality-shows, to Real or Virtual Time, and if McLuhan considered modern technologies as an “extension of man”, now we may even consider them as slayers of reality  certainly not up to a perfect Baudrillard level, but close. Art has become, in this case, both last-rehearsal and first performance, assimilation and transfiguration, work and contemplation; beginning, middle, and end, with and for the spectator, who is the real protagonist of the whole event.

Now to the artists and the works that little by little took shape and expanded in a stimulating, original and at the same time familiar environment. As for Elisabetta Benassi we can admire Yeld to total elation to total elation , shot at Non Valley, a location the artist chose for her work on energy, the fleeting of time and its employment, with a car running inexorably down a circuit in a cave. The collective Corpicrudi , on the other hand, used the Gallery halls to build their Study for Stella last ciak , part of a series investigating the relationship between fiction and reality. Luca Coser created a video installation where, from a slit on a door we can catch glimpses of dozens of different faces.

Gianluca and Massimiliano De Serio invited the people of the whole Trentino region to a casting to find the protagonist of Neverending Maria Jesus , a reinterpretation of the last scene of their film Maria Jesus (2003), the real story of a woman from Peru , a work in between representation and memory. Michael Fliri built a small house within the space of the Gallery, and realized a sequence plan during which the artist modifies it, resulting in four different homes.

Stefania Galegati shook the tranquility of this Trentino town with a casting to find eighty extras for her new film, a mystery story, for which Trento ‘s Piazza Duomo filled with actors, policemen, tourists, and onlookers. Adrian Paci plays on the contrast between the majestic images of the Lagorai mountains, and the self-played concert of cow-bells accompanying a herd along its path. Pennacchio and Argentato , in the Fiemme Valley , shot a video between the crests of the Dolomites, based on the concept of time and trace, a perceptive gap of the temporal dimension, on the idea of forgetfulness and loss. Marinella Senatore , who also worked on setting-up the Gallery halls, presented a rivisitation of musicals , based on a series of “useless stories” that revolve around the world’s greatest scholar of snowflakes. All the things I need saw the involvement of extras and a local choir.

Marcello Simeone thanks also to the technical tools available on site, completed the editing of his project: images shot in London and re-elaborated, edited, and revisited live, under the eyes of the Gallery spectators. Suzie Wong+Yuri Ancarani+Wang Inc‘s work investigated on the hidden facets of gambling joints  universally alike, in Trento as in Rome, in Italy or abroad, sharing the same genre of humanity, the same alluring street signs, the same clientele, the same atmosphere.

Zapruder Filmakergroup realized the second episode of the Daimon series. After Daimon. Il laceratore , now comes Daimon. XXX (Trente) , based on the technique of anaglyphs applied to local landscapes, with a literary reference to Louis Trente’s “Le Petit”, and Georges Bataille “The solar anus” George Bataille’s “The solar anus”, and “Le petit” which he published under the pseudonym of Louis Trente . ZimmerFrei , authors of the entire Cinema Infinito project, collaborated with Mk in the realization of yet one more video project for their Shooting test series . Diego Zuelli , with his Giovane triste a Trento (Sad youth in Trento) , vaguely reminiscent of Duchamp, sets his computer-graphic creation in streets, squares, and characteristic corners of a completely deserted Trento , where a young boy wanders, disoriented.