Struttura, A Wreck In The Digital Sea 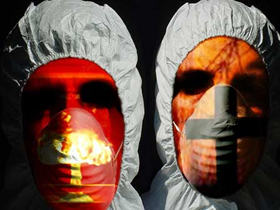 According to the Italian dictionary, Structure means an organic system of elements, materials or not materials, on a mutual coordination and interdependence terms. This is also what we find during Tuscan three days of studying and comparison between the languages and the new media art.

Structure, this year at its second edition, is a system of elements on a mutual coordination and interdependence terms. The organizers are an example of it: a group of boys and girls with a different cultural background but they share the same theoretical and practical participation to the digital media. The result is a winning mix, which perfectly combines the artistic look with the technical one; in pursuit of destroy useless barriers between working and school camps, which are only apparently different.

Besides the exposition of some installations and the projection of a video review taken from the prestigious Festival of Pesaro, the exhibition was animated by artists, art critics, researchers and experts of the new technologies (Sandra Lischi, Valentina Tanni, Bianco-Valente, Luca Farulli, only to mention some names), who tackled the communication, the digital art and their likely future developments, with the intention of beginning to walk on the same street. What would our society become if technicians, scientists, philosophers, literates and artists begin really to study altogether in order to create complex vision of the reality? If we stop working alone in our ivory tower, would we manage to create representations really useful to comprehend the human being and the relationships, which he creates with the others and the environment?

I spoke about this with one of the organizers of Structure, Thomas Alisi, web-engineer in Meex.it and doctorand at Micc (media integration and communication centre) as well as teacher in the postgraduate degree in Multimedia Content Design at the University of Florence , where for the first time I’ve met him as a student

Giulia Simi: We start from the beginning. From what was Structure born?

Thomas Alisi: It was born from a mix of different competences. The support of the city council of San Vincenzo was fundamental to start and keep on developing: it is rare to find a sensibility to the new media in the public administration. The real core of Structure is the attitude of its attendees to the development, diffusion and sharing of contributions, in a dramatically interdisciplinary view, oriented to the new media. If you explore the origin of the name of the exhibition, it’s clear the contradiction between the learned and semiotic attitude and the wanted reference of a mainstream symbol in the evolution of the technologies: Matrix. The completely horizontal nature of “Structure” is reflected in the meex.it project which shares the attendees: literally “media experience” remembers the act of blending and so of creating a mix of different competences. This horizontal Structure allows us to act in a flexible way and to attract that spirit of “voluntarism” which is necessary for the realization of the festival.

Giulia Simi: This year edition was centred above all on the video-art and the net art. According to you, which are the common points and the differences among these artistic subjects

Thomas Alisi: The last year I confronted myself with the professor Farulli of the Academy of fine arts of L’Aquila : he showed me a work of the video-artist Petulia Mattioli. At the end of the projection he asked me an opinion on the just seen work; I would have given a comment which was suggested more by the provoked emotive state rather than by a previous knowledge which allows me to judge with the right objectivity. With my great surprise the comment that I made was in agreement with what the professor Farulli had theorized. I think that the common point among these different subjects could be, besides a similarity created by the lowest common denominator of the new media, the attitude to explore the nature and the meaning of the net, so as communicate with non conventional or even unknown tools. I think that the goliardic contrast, which rarely is created in the mutual comment of the artistic production, is the symptom that these subjects have more common points than differences.

Giulia Simi: I found in Structure an exact intention of combining the artistic vision with the technical one, united with the medium of connection: the computer. According to you, how hard is this process? And which results could it give if it were a more widespread praxis both in the academic and external area?

Thomas Alisi: To combine the two visions is necessary and also even if it means the breakage of friendly or collaboration relationships or else. Every second used to decant technique into art and contrariwise is very important. The technologies are complex and they will become more and more complex. The artistic vision needs a background of aesthetics, whose weight increases continually. It is simply impossible to realize something that is technically valid and artistically suggestive, without there is a convergence between the two realities in a sole flow of media. The potentialities of the sharing and of the cooperation are clearly unlimited but it is very difficult to win the resistances, above all in an academic area: unfortunately the first obstacle to deal with in order to realize something is very often to force the shopkeeper logic.

Giulia Simi: In one of the speeches of these three days there was a heated debate on the opportunity to create a sharing knowledge with internet. And more: you spoke about the opportunity to create universally valid concepts on the basis of predefined algorithms. The research on the semantic web, among the other things, forecasts the opportunity to create the keywords of a text automatically, relieving therefore from this process the human mind, whose limit would be its subjective vision. But don’t you think that this hides the presumption of thinking the technology as a neutral instrument, which is able to create a universal and objective knowledge? That is, don’t we risk creating a sharing knowledge but actually an extremely limited knowledge, without gradations and without that wealth which is formed by a multi-vision of the reality?

Thomas Alisi: The evening in which we talked principally of video-art, came out the theme: artificial intelligence. The couple of artists Bianco – Valente showed one work of theirs: two machines which face each other talking, in the empty pursuit of exceeding the Turing’s test, potentially pushing the conversation towards the infinity, till an electric spring would have nourished them. Who could ever believe that two human beings can talk for evermore without having the need to meet one’s own bodily needs? When you ask someone to multiply two numbers of six digits, the more intelligent answer is a long pause of reflection which ends with the communication of a wrong result rather than a right elaboration which is lasted some nanoseconds. The machines don’t comprehend how soft is a cat, the light hot taste of the just pressed oil, the ensemble of the perfumes which remember the childhood. The machines are very good to tolerate billions of letters and symbols, to categorize, to find separation plans, to calculate distributions curves. They are beasts of burden which bring their burden at the top of the mountains. What is created, then, is in the hands of the people, in their creation ability; they realize a second of ecstasy and then find another mountain and then start again from square one.

Giulia Simi: This year the title of Ars Electronica was “Simplicity, the art of Complexity”. You were there. Do you think that this is the future? To transform the complexity into simplicity? John Maeda says that simplicity isn’t the contrary of complexity but its complementary key, what allows us to get and use the polymorphisms of the virtual reality or the nets of the global knowledge. That is, we need a simply approach in front of a complex world. Do you agree with this sentence? How do you think it can translate within the future development of the new media?

Thomas Alisi: We don’t transform the complexity into simplicity. There’s no distinction between complexity and simplicity. There’s no limit to complexity and so to simplicity. The scientists who theorized and experimented the concepts of thermodynamics have underlined these sentences about one hundred years ago: entropy, heat, chaos are destined to increase. When we clearly understand the essence of the complexity, which we have to handle, we comprehend automatically the simplicity which this has to be described with. An academic professor of geometry was used to say that his subject was as the centre of a cube of large sizes: more we studied it and more we went to one of the cube’s top and apparently the visual get smaller. But when we arrive at the top and we turn round, then the beautiful simplicity of the cube comes out. There is only one way to help the development of a united vision of simplicity and complexity, as Samuel Beckett said: to try, to fail, to try again, to fail again but better.