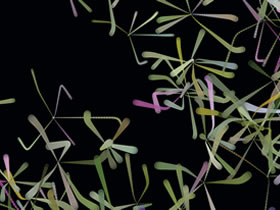 The contemporaneity is irremediable influenced, in its various domains, by the use of the technologies, which should be used to simplify our life and to make the sharing of our experiences more direct. But the new technologies influence us and persuade us to not always spontaneously behaviours in order to permit the interaction between the mankind and the machine; forcing us to these actions, in some way, they complicate our life.

We find us in an intermittence state between two not opposed but complementary conditions, between two terms which characterize our everyday life; we are today always suspended between simplicity and complexity. The art, which uses the new technologies as a creative instrument, contains itself both the aspects, and the artist, who expresses himself with such tools, tries to hide the technological side, to make it less visible, in order to close the gap psychological gap which separates us from the artificial and to make us “forget” the complexity of the machine, in order to obtain a more spontaneous and human interaction.

The work of the artist John Maeda, author of the book “The laws of simplicity” goes towards these directions; he tries to create instruments, which are able to translate his expressive language into the machine’s language, establishing alternative models of interaction which make the access to the technologies simpler. Maeda self is the inspirer of the theme of the 2006 edition of the Ars electronica festival hold from 31 August to 5 September in Linz .

The title of the festival, Simplicity  the art of complexity, represents the double essence that characterizes many social, artistic but also political phenomena of our days; the works exposed during the festival describe this concept very well.

Among the exposed works at the O.K. Centrum in Linz , the Messenger of Paul De Marinis won the Golden Nica, the prize given by Ars Electronica in the Interactive Art section. The installation connects in a metaphorical way new technologies with older one and in particular it draws near Internet to the electric telegraph, created by the scientist Francesco Salvà. In concrete, a computer receives contents in email coming from the net, it transcodes them letter for letter and translates them in another shape.

One of the receiving devices is composed by 26 glass vases; everyone is filled with an electrode and it contains electrodes of metal, which represent a letter of the alphabet. The electric current makes the electrodes change their aspect, from bright to dull and produce hydrogen bubbles around the letter activated by the web message. A second device is composed by 26 skeletons; every one wears a poncho with the letter he represents and when it is selected to transmit the message, the skeleton jumps. A last device is composed by 26 pots in metal which produce the message with 26 different pre recorded voices. The news travels around the world and then it switches off so.

Another installation suspended between the traditional and the innovative principles is Hello World of Yunchul Kim, a type of analogical temporary memory aesthetically very interesting.

It is such a column, composed by 246 meters of copper tubes, with which the sound vibrations travel. The voice message “Hello world” codified by a computer travels in the system and with the acoustic delay provoked by the length of the tubes is possible to store the data. Longer is the path that the modulated waves have to make, greater will be the delay and with it greater will be the memory ability. In this installation the delay is about 0.8 sec., which corresponds to a kilobit of memory ability; after having travelled inside the tubes, the sound is decoded and sent to a monitor where the sentence is displayed and the message can be understood.

Drawn is a Zachary Lieberman‘s work, which proposes a type of more direct and intuitive interaction; it manages to make a simply drawing made with ink alive and to make it interact with the author’s hands in a spontaneous way.

On a table there is a white sheet and the user is asked to leave a sign on it with ink and brush. A camera above the table shoots the picture and a digital animation software reproduces therefore the video signal in real time and it projects it. The result is an hybrid video signal, which combines effective and virtual reality, where the user’s hands can interact with the created sign moving and pushing it with the screen as it was animated.

Another interesting work is the Khronos projector of Alvaro Cassinelli, which allows us to see pre recorded videos in an alternative way in comparison with the normal modalities. It offers to the users to physically change a surface of flexible projection in order to cause an effect on the projection time; that is, touching the screen, the user can make parts of the whole image go ahead or back chronologically.

The work of the G.R.L. group (Graffiti Research Lab) is based on another type of interaction. GRL sees the public space as a hacking and action place; the idea is to use the technology to strengthen the expressive personal opportunities in the urban communication. The studies of the group brought to the development of a device which tries to improve the normal instruments of street art with the new technologies. Their creations embrace throwable magnetic leds which are stuck to various surfaces, urban mobile projection, electro graffiti, stickers with circuits.

The Road Movie project is developed on the road, too, but with other tasks. It tries a projection modality of the local in the global sphere. The German and Japanese artists of the Exonemo group have installed on buses which travel throughout the Japan , webcams which shoot pictures of the surrounding panorama during all the travel and they sent it to a web site. The images can be printed on sheet models of the bus and bent in a certain way they can create a reduced three-dimensional version of the Road-Movie bus and at the same time they can show part of the surrounding panorama in a right place and moment.

The Kaffe Matthews’ work Sonic Bed_london involves exclusively the physical sphere; it is a simple and bare installation which offers an alternative way of listening to music. To use this audio system we have to lie on a large bed, under which there are a series of 12 loudspeaker capable of reproducing very high or very low sound frequencies which can be heard by the skin and by the bones more than by the hearing. The effect is a message of harmonic frequencies which pass vibrating throughout our body.

Ars Electronica managed to create also this year a series of very involving events. The musical scheduling was very interesting, above all on Sunday night with the title: Some Sounds and Some Fury. It managed also to take the tradition and expanded its limits, disclosing the opportunities, offered by the new technologies, to expand the ways to compose music and also to use it. Among the live performances the Ryoichi Kurokawa one was particularly valued. He was seen in Italy at the Mixed Media festival in Milan the last May and his performances show how sound and imagines can combine each other in a sole result in an extremely harmonious way, without the fact that one part prevails on the other. They give also strong emotions with an abstract graphic mixed with minimalist rhythms.

The Nout Human’s performance (Recombinant media labs) with sound effects was very suggestive, with Ulrich Maiss at the violoncello and Masako Tanaka at the visual effects, it’s an elegant but powerful way to propose the influence between sound and image.

Among the other performances there is the Matmas’ one (Drew Daniel and Martin Schmidt) altogether with Zeena Parkins, performed on a boat near the Linz port. They managed to create sonorities with great diapasons leaned on dry ice blocks whose vibrations thanks to the changing of the ice state, were expanded and gave an unusual sound frame. Eventually the Black One is not only unusual in the electronic music domain but also captivating. It was born by the SUNN O))) group, composed by Stephen O’Malley and Greg Anderson who both came from the same black metal/doom scene. The live with primitive and at the same time dramatic sonorities provoked an esoteric atmosphere based on very slow and heavy sounds, it proved that their saying (full volume gives the best results) works well.

The great originality of Ars Electronica 2006 was however the Saturday day with the title: Going to the country  A day-trip to the Hinterland in Search of Simplicity. The audience of the festival was moved with buses to St. Florian, about 15 Km from Linz , where inside the baroque monastery of the town there were musical performances and lectures, and many installations were exhibited. One of the problems of the location was the excessive overcrowding of the conference rooms which makes the entrance sometimes very difficult.

It was a very uncommon day within the normal scheduling of the festival with many audience. Among the many performances there was a concert played with the bells of the monastery by Michael Nyman. An experimental series of works which think on the forms of the code within a new way of seeing the programming language and the software structures by Ben Fry. There were examples of generative animations edited by Lia and Miguel Carvalhais and the strange sound performance of Hilke Fahrmann and Jurgen Schneider with one of their musical instruments, the “Scapha”, a long steel guitar which must be played with more hands and connect to a software which elaborates and reproduces the sound.

Within the other events of the festival, the locations in Linz and also the Ars Electronica Center and its permanent exhibition were the same. There, interesting panels took place and new works were exposed near the old ones. Among the new works there is an interesting Morphovision-Distorted House by Toshio Iwai; it’s a system that underlines the phenomena connected to the light effects, where a little box turns very quickly and seems to change aspect as it was an animation and not a solid. But actually the change is only simulated with the lightening given by the special lights. The transformation changes choosing with a button one of the different patterns that modify the light and combine with the rotation movement, creating a new reality.

At the Lentos Museum of Art was possible seeing the Nature work of John Maeda, the same author of the symposium of this edition. Nature is a series of short and hypnotic video sequences, created by a software of the same artist, who takes inspiration from the abstract expressionism. The Maeda’s goal was to have the opportunity to paint with the computer in a sign language. His motion paintings show abstract images, which can evoke natural forms in evolution with slim changes of colour and shape.

Eventually the Hauptplatz in Linz hosted many other different projects. Among them there is Moon Ride of Assocreation, where the audience was invited to participate riding a special bicycle in order to generate the necessary energy to fuel a great battery which switches on a great bright balloon poised in air on the digital community who were present at Ars Electronica 2006.