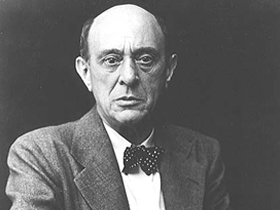 Seventy-five years ago, Barcelona welcomed Arnold Schönberg between its wonders. Today the city remind its illustrious Viennese guest with an exhibition dedicated to his character and his artistic and creative production, not only musical. This event, from 8th September to 1st October 2006 thanks to the Fundació Caixa Catalunya, was put up in the sinuous spaces of the Milà House , known also as La Pedrera , maybe the most famous architectural work of Gaudì with the Sagrada Família.

It is not a case. In fact the construction was terminated, after five years of efforts, in 1911, year of the death of Mahler and the affirmation of the modern music that saw in Schönberg one of the most important exponent. The same year, the Austrian composer inaugurated a strict ideological and collaborative relation with Kandinsky and many other poets, painters and writers occupied actively in the thoughts about the linguistic and conceptual breakings of that important historical moment.

The composer, who moved into a warmer city because of his wealth, in 1931 chose Barcelona , were in 1925 he had already presented some of his works. The exhibition showed the reproduction of his rent contract in Baxida de Briz 14 (still existing at the 20-22), in the Vallcarca district. The continuation of the street, who lead to the magic and again Gaudinian Parc Güell, is now called with his name.

During his staying in Barcelona , last almost nine months, Schönberg deepened his relation with Catalonian musicians such as Pau Casals and Robert Gerhard , the major interest that made him chose Barcelona . It was there that, the 8 th May 1932, his daughter Nuria was born, who became bride of Luigi Nono and who illustrated his father life and work., in a duet with the pianist Stefan Litwin , the 16 th September night, during the meetings related with the exhibition.

In Barcelona , Schönberg followed practicing painting, producing still life, caricatures, portraits, auto-portraits and drawing, some of them exposed during the exhibition. “The artist doesn’t do what people must consider beauty, but what is necessary to him”, said the composer, and Keller maintain the “Strauss searched the beauty, Schönberg the truth”.

No one doubts about the researcher character of Schönberg. He dedicated himself to sport and do-it-yourself, but he also always invented new things. For example a futurist machine that wrote scores itself (there was just the project, as the machine was never invented), a variation of chess for four players inspired by the war, card collections, boxes to order the dodecaphonic series.

The exhibition Schönberg BARCELONA , free entrance, was little but extremely suggestive. The shrines offered an interesting glance to his original scores, creations, drawings, photos and books who had a strong influence on Schönberg (such as “Seraphita” by Balzac). There was a comfortable and welcoming circular room where his works could be listened and an audiovisual station where some interventions by some Catalanian intellectuals could be listened, such as the composers Xavier Benguerel, Josep Soler i Joan Guinjoan and Josep Pons the director of the Jove Orquestra Nacional de Catalunya .

The 14 th , 15 th and 16 th September, on the premises of the Pedrera, the international symposium on Arnold Schönberg and his cultural inheritance in Catalonia was given with conferences, round table and a couple of concerts. Free books were available at the entrance with a more detailed edition of the exposed texts in the exhibition, a selected bibliography on the composer and a CD with two music tracks ( “Op. 33b for a piano” and “Supervivent de Varsòvia” ) and a fragment of the conference MyEvolution, with Schönberg original voice (translated in Catalonian on the book).