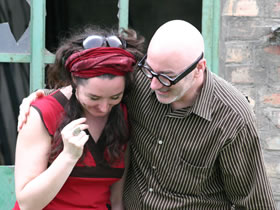 If, as De Kerkhove states, we are in the electric era, it is then allowed to consider the forms of digital culture to be a sort of Diogenes’ lantern with which illuminate our “humanity”.

Light up your contemporary , that is to say Transart, at its sixth edition between Trento and Bolzano, seems to boost this vision through a hectic schedule of events and performances where research, contamination and quality combine to form an original blend of music, dance, theatre, art and new technologies on the background of new and fascinating train warehouses, factories and deserted monuments. After a suggestive opening (8.09) with the Arabian Nights by the Absolute Ensemble in which Occidental music pop/rock was combined with the typical sonorities of the traditional Arabic repertoire, the festival has devoted a long week- end to the contaminations between video, art and music, in the suggestive fortress of Fortezza. Video-art is one of the major parts of the show, where multimediality and innovation are the leitmotivs with a particular attention to the contemporaneous musical experimentation.

The magnificent setting of the Fortress has housed the first of three monographic short stories by Skoltz_Kolgen one of the most popular video-artist and Canadian live media performer duo. Silent Room is a video-poem made up of 16 “tableaux vivants”, evocation of 16 rooms of an imaginary hotel. Awarded at the New York Independent Film and Video Festival in 2004, it is made up of 16 sequences of sounds and images leading the spectator into the psyche and emotive state of human beings appearing as phantoms of themselves.

“Our challenge is to make Informatics skeletons sensual, creating a new visual space with a credibility such that people, when plunged in it, believe it to be authentic so as to touch it, even if it is just a figurative and abstract dimension. ” So say Dominique T. Skoltz and Herman W. Kolgen , whose polyhedric artistic production finds its cardinal point in the audiovisual performances exploring the intrinsic connexion between sound and image.

The portrait, dedicated to Skoltz and Kolgen at the discovery of digital sensuality, carried on with two further events in Bolzano . During the first one, ASKAA (already shown in Italy at the Mixed Media festival of Milan on May 2006 ) was presented. It is a work which launches the spectator into a virtual greenhouse populated by virtual plants multiplying endlessly on the tracks of microtonal sounds, elaborated in a random pre-determined by the artists. ASKAA is an ecosystem reacting to music growing under the stimulus of sound impulses. Stimulating vegetative processes, organic images of blossoming vegetation overflow the screens and invade the environment. The review -dedicated to the two Canadian artists-ended with Epiderm , in which science becomes an instrument for artistic research, between sound and vision, guiding the spectator through a curvilinear travel, which, from the skin, induces to an infinitesimal hyper-reality.

The senses rule even in the installation La fleur de la Peau by Mathieu Briand,- young French artist, devoted to face the conventional criteria of visual language- as well as in the installation of the choreographer Prue Lang ; La fleur de la Peau , presented for the first time in Italy within the Festival of Trento, which is a fundamental lap of the experimental path of the artist, consisting in two frontiers: on one side, the notion of interdisciplinarity, on the other side, the notion of experience.

A house, a suspended place, a nebulous atmosphere cut by a green laser following the traces of a hypnotic music. Undulating motion, caused by the unexpected movements of dancers, rise little by little around the spectators while the normal perception stops and the mind opens to new sensorial horizons.

As far as music is concerned, the festival followed with a soirée introduced by the historic electronic harp of Zeena Parkins , prelude to the sample of sounds Matmos have dedicated to ten personalities of the world of art, philosophy, history in order to reinvent their personality. Patricia Highsmith, Valerie Solanas, Ludwig Wittgenstein, Darby Crash, William Burroughs, Re Ludovico II of Bavaria will come to life again through the tension of a sound filled with irony and ambiguity.

“Points of view” is the title of the show gathering the works by Anri Sala, Christian Jankowski, Eva Marisaldi, Annika Larson, Aernout Mik and Diego Perrone : suspended between personal stories and social researches, the video-works here presented are revelations of contemporary art. Between experimentations halfway between music and architecture, live music and eminent anniversaries celebrations(this year is the centenary of Samuel Beckett’s birth), the axis of the festival extends from Rovereto northward up to Innsbruck for then plunging again into visions and sounds with Matthew Barney and his Drawing Restraint , last movie carried out in collaboration with Björk (co- protagonist).

It is then impossible to document in its complexity a festival which has undoubtedly the merit of being able to create a platform of inter-regional and trans-border contemporary culture, thanks to the participation of artists of international calibre, to the support of local authorities and to the collaborations with the most renowned European festivals.

Transart even managed to involve, as many would like to, a heterogeneous (and more and more motivated by a serious and qualified cultural offer) public, thanks to a policy of definitely prices reasonable. The festival will stop on the 8 th of October with sound environments by Benedict Mason , magnetic improvisations by Bob Ostertag and Pierre Hebért , choreographies by Veronica Riz . For insights Radio Tandem of Bolzano devotes some specials to the festival you can listen and download on the Alto Adige Cultura podcast.