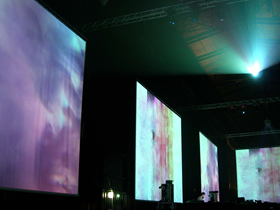 There are several dimension during an audiovisual performance. Time management, relation with the space, chromatic and formal balance, project and composition coherence, audiovisual sync, liveness, synaesthesia.

Maybe more than anything else, there is the immersion. That means realize a multi-sensorial ambient completely detached from “what is outside”, a world apart, deeply experiential, a break with the everyday life. A one-way ticket for a spaceship.

Although visual music is an expressive form that accompanied the twentieth century, it is absolutely the last decade that the discipline started to live alone, that everybody could benefit from. The audiovisual performance (or mixed-media, or live media, or live cinema, or viewsic, or whatever the name you decide for it) suffer the influence of many other artistic forms that border with it. Design, architecture, painting, cinema, music, theatre, coding and many others.

Recently I found interesting the weight that design has in the final result for a better performance . Design is a practice, an interdisciplinary practice, hang on two extremes. On one side there’s the project need of goods production, materials and not, through a research of aesthetic and stuff. It is the case of the Menda bottle , of whom Harvey Molotch talks in the Phenomenology of the toaster . On the other side it is an instrument that transform to infinite the aesthetic value of the handmade, leaving the using value intact. It is hard to introduce in a fork radical modification to the normal form, experimenting new solution.

So, I think that the audiovisual performance too has this existent tension. During the last years I assisted to some refined technique shows, but not immersive by the experiential point of view. It is not only a weak point this though. The research can happen in many dimensions, even deepen the image side more than the scenery one. It can delineate with more precision the visions and materialize it with elegance can be an interesting objective. But they are, in my opinion, all occasions in which the aesthetic variation is the only one investigated, without touching the form-type. The refinement of the work becomes the principal objective. Rarer are the performances in which the interdisciplinary influence of the design is used as an instrument to work on something else. And this bring us back to the immersion concept.

I think the problem is absolutely political. We are insert in a production and consumerist system bigger and bigger, besieged by goods and services that proliferates to satisfy every taste variation. Do we really need new form of expression based only on the aesthetic? I think we need new experiences that invert our course of rules imposed by the society, state of conscience created thanks to the design able to make us imagine undiscovered lands. So maybe this means change the using value of audiovisual performances.

In this sense I suspect that, in the magma of interdisciplinary connections we are talking since years, we should start looking at the theatre, because of the studies it brought on the construction of worlds.

The audiovisual festival and performances are still refined and prestigious boxes where completely different contents are poured to a final aesthetic result. Let’s start thinking about places, performances and fruition modalities that can take us on the spaceship.