Body In The 21st Century: More Than Skin-deep 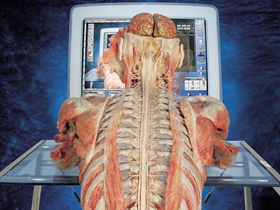 The exhibit Körper, Gesicht und Seele (Body, Face, and Soul) is one of the many events that in the last years have developed around the body. The contents focus on the typification of femininity from the 16 th to the 19 th century, from the pictorial imaginary of the Renaissance up to the androgynous subjects of contemporary performances.

Another artistic experience that definitely brought the theme “body” to the forefront of contemporary attention was the exhibit Körperwelten/ Body Worlds , a medical-engineering synopsis of the reflections on the body-material. The exhibit, conceived by professor Gunther von Hagen , now on its second edition, aimed at showing the potentialities of the plastination process . In the process the immersion of bodily tissues in a mixture of polymers stops (or slows to an extreme) the progression of organic decomposition. An additional benefit of plastination is that the body can later be treated as a plastic material, meaning that it can be divided into sections and modelled in all of its parts (the inside of the belly can be shaped into drawers, thighs can double as shelves, and so on, in an unthinkable anatomic view).

In the last forty years the body was, in a way, re-examined by society’s knowledge; there has been a radical awareness that transformed it into topos of every-day reality (advertisement and sports), and of scientific, but also philosophical, anthropological, and more strictly humanist-artistic communities.

The greatest problem, a millennia-old philosophical question, is no doubt the circularity of the reflection on the body: how can I reflect objectively on that which is the very subject of our experience (i.e. the body)? Though it is reductive to reduce a climate of such broad significance down to a few main factors, it’s undeniable that the roots of this case are to be traced mainly in the political-cultural and medical-scientific scene. The first is represented by the studies on Foucault’s “biopower” , while the second by the entire biogenetic (and biotechnologic, a term that can’t be separated from biogenetics) movement, which began to spread in the 1960’s.

Foucault’s studies on the history of sexuality ( Sexuality and Truth ) have described that new mechanism of power that begins to take shape from the second half of the 17 th century: while the power previously focused on death, the energy of biopower focuses on life. From a force that would only decide on whether to hold back life or end it, we go to a force of regulation of life itself, through normalizing structures, such as school, hospitals, and the church.

As for science, it was especially the findings on DNA, taking place at the end of the 1950’s by Watson and Crick, and by Shapiro (1969, with the isolation of the first gene) that accelerated the possibility of intervention on the body, unthinkable until then. The application projects that came out of such discoveries are among the most impressive for our society: protein engineering, gene therapy, procreatics, the use of staminal cells. The alarming questions arising on the future of humanity have shaken the priorities of philosophical thought: bioethics and the philosophy of medicine have been institutionalized to allow these fields to grow without being destructive to human beings.

Starting in the 1960’s the body is thus “tied down” to speculation and becomes a “metaphoric focus”, amplified by the activities of marketing and the visual culture of advertising. The most meaningful reflections come from what was defined as the paradigm of body ownership, or rather, of the prospect of offering one’s body  an entity which may be reduced to a few cells  to scientific research or pharmaceutical experimentation: an ownership which is directly correlated with the possibility of commercialization and exploitation.

A topic of vast and radical consequence if we think that talking of genetic engineering  unlike the traditional expression of “selling one’s body”, which calls to mind age-old social phenomena (such as prostitution)  means going deeper than skin depth, an intrusion  or a capacity of intervention  into what we know as the innermost level known of life, DNA.

In this case, without wishing for a paternalistic intervention from institutions, the patient, though volunteering for direct experimentation on his own persona, may not be aware of the degree of scientific uncertainty that directly touches his physical integrity, rights, privacy, and personality.

If many institutions agree in condemning the pursuit of the greatest profit from scientific discoveries in the field of biotechnology, not everyone agrees on their limit, that is, the use of human materials to obtain results that may prove instrumental to medical problems yet to solve (handicaps, rejection of transplanted organs, chronic and degenerative diseases). On this issue, Ownership of the Human Body : Philosophical Considerations on the Use of the Human Body and its Parts in Healthcare , written by H.A. Ten Have and J.W. Welie, proves particularly illuminating .

From a pragmatic viewpoint we need, now more than ever, to develop a culture of error, or in other words, a capacity of prediction equivalent to the consequences of the deviance (a whish expressed by Wolf Singer in Das Design des Menschen ). That becomes naturally possible only denying the utopia of planning, and becoming aware of our limits  limits that show an increasing need of an institutional formalization, yet open to the instances that come from society and the social movements that struggle for an alphabetization of risks and scientific possibiliti.