Time Frame And The Manipulated Time 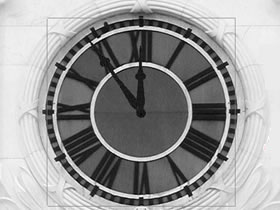 Time is elastic as dilated by the passion, Marcel Proust wrote. And the subjective ductility of the time, the metamorphosis of the precise and measurable in something vague and indefinable is at the centre of the Time-Frame works, half-serious exposition at the P.S.1 COnteporary Art Center of New York (until 2 nd October) on human perception limits.

Installations, photos, but most of all video-medium time-based that deeply explores and represent more than the other the evolution of actions and feelings, starting from different experiences to give a little but precise description of the disputableness of our sense.

Masterful piece is Swamp by Robert Smithson and Nancy Holt. In a canebrake in the middle of a marsh, the lens of a videocamera see nothing but a muddle of canes, while the off-screen voice gives advice to get off without succeed. And when a sunset on the sea can condense in a few minutes and distort in the prospective until becoming a ping-pong, as in the video Burial at Sea by Paul Pfeiffer, a forty-five minutes flight can extend for more than three hours, as in Rio de Janeiro X São Paulo, air trip with highway time or addressless love letter by Thiago Rocha Pitta. Or the sleeping of a person can be recorded in its real length to offer an objective work, though impossible to benefit of its entireness, as in Sleep by Andy Warhol.

As much gigantic as the previously quoted work is the project by Cory Arcangel , artist interested in the interaction between technology and culture. Decomposing in single lines of colour the movie Colors by Dennis Hopper through a customized program, he obtain an infinite symphony of moving lines (for a total of 808 hours, but he admit to have never seen in its entirety). A filmic work with a defined plot becomes a sort of essential chromatic palette, impossible to benefit of its entireness once again, in which the original sound is the only sensorial clue.

Dark Empire by John Pilson has different remarks. The recording of the Empire State Building during the 14 th August 2003 black-out  that left the entire New York in the dark and so lots of the East Cost, becomes both an homage to the Empire by Warhol (8 hours of static recording of the city by the skyscraper, spangled of lights), and a sinister and allegoric symbol of the vulnerability of an empire already hit and immersed in a sort of reason darkness. In 22 minutes of absolute silence, the dusk is presented, in a dark that absorbs one of the symbol of the city that never sleeps.

Time Frame is a double connotation show. On one side it offers examples of how time can be manipulated in video; on the other side leave the door open on a question about its aesthetic fruition, especially in museum area. Or is it everything really relative? .