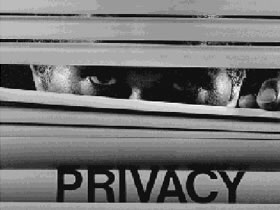 Privacy is an everyday term, that the average citizen meets thousands of time on web disclaimer or little notes at the end of the bank or supermarket card contracts.

The privacy concept or the more actual privacy feeling does not answer to the common sense of “being in private” as the behaving inside a domestic space ( David Lyon, 1994, The Electronic Eye: The Rise of Surveillance Society, Minnesota University Press ) . Privacy is more and more related with the negotiation acts. What can or cannot be done with the personal digitalized information ( Perri6, 1998, The future of privacy , London:Demos )m through technologies more and more sophisticated from CCTV, RFID and more.

In the first privacy version, the traditional one, the proliferation of electronic surveillance didn’t directly damaged the perception of the single of being private, except for the showing of the domestic space, for example by web. In the second privacy version there’s the aware or unaware involving of singles or groups of people inside the public sphere, where the use of surveillance technologies is approved. The collection, management and using of personal data is registered as public security, to avoid several crimes. The perception of the single as controlled subject in a public space becomes controversy and remind the dual nature of the surveillance concept, protective and invasive at the same time.

The fear of the other’s mantra has contributed to feed the psychosis of the protection, multiplying the production of the surveillance technologies in order to defend from unknown attacks. As for a strange parallel with the tough medieval surrounding walls, the occidental urban space seems to need walls built with electronic network.

The new bastions that protect our cities are knots of an invisible network that produces every day tons of data and images records to reproduce and represent the public experience of thousand of people. The knots inserts in pre-existent architectures, and the physical space is mediated by a panorama made of videocameras, aerial and technologic instrumentation of transmission for digitalized information by now familiar for the human eye.

That kind of instrumentation is positioned in strategic position at high intensity of frequentation, for example inside a public exercise such as bars, libraries, bus, tubes or trains, and named “friend videocamera” or “visible eye”. As citizens we become unconscious protagonists of monitoring and visual narration captured by the invisible network of data exchanges. Provokingly Mark Poster (Poster M.,1990, The Mode of Information, Cambridge: Polity Press ) has suggested that the produced files on the citizens circulate as extra bodies, with their own stories and their own lives, without us.

And what if such stories would not be only in the database of an elitist group assigned to the protection of the citizens and could be on line real time as we stroll or enter a public space? Physical space and media-supervised space would intercept, opened to a mirror game between the production of the images of the electronic game and the perception of the real lived in the urban ambient, bringing forward the concept of confidence in the technologic means and the privacy concept.

Michelle Teran, a Canadian artist, has dedicated his project called to the discover of an everyday narration and “invisible” histories picked up by surveillance instrumentation. The research sweeps the readings of Michel de Certeau, Marc Augé, Gaston Bachelard, Georges Perec, Henri Lefebvre, and concentrates on the urban exploration through the derive , as discovery of new physical spaces that intersect audio and video networks of data transmission.

On May 2006, a workshop of a week has involved the city of Weimar in collaboration of the architecture and media department of the Bauhaus University in crossings of urban spaces to search invisible narration produced by the technological instrumentation of data and surveillance transmission. This type of workshop has also took place in Brussels, Amsterdam, Barcelona, Berlin, during festivals such as Transmediale 2005 or Sonar 2006.

The workshop is a collective performance, using a simple and everyday technology, able to pick up the images produced by the surveillance cameras with wireless network. Diffuse CCTV wireless exploit the spectrum of radio wave that is not under licence. Little radio aerials normally used to connect dvd/vhs recording to the television are able to pick up real time the images produced by the electronic surveillance eyes. A common minidv video camera connected to the device allows to visualize the images collected by the CCTV. At the same time with a laptop equipped with wireless stumbler it is possible to pick up the wireless spot and the automatic voices connected to it, of numeric decoding of the spot.

So a stroll in a district becomes a multi-sensorial, that built multilayer geographies made of physical spaces, information and electronic data normally not perceptible by everyone. The participants to the performance are invited to explore and observe the urban space further than the everyday perception of the physical space, bringing up through the experience several question on the knowledge and the conscience about surveillance technologies, about the faith on the electronic instrument and the invasive/protective presence of such an instrumentation.

The battles to the public access to the data, to the counter-surveillance and the most politicized freedom of movement and information are not only directed to the ambiguous deconstruction of the system, but also to the growing of the common consciousness, most of all because “the growing of the surveillance culture is no more that a challenge against our conscience (J.Mc Grath,2004 Loving the big Brother , Routledge).