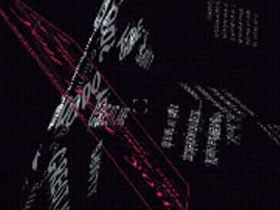 You have to be keen to historically and critically approach current vjing world. You must  at least theoretically – know what are the most used equipments and technologies, the real original artists of this crowed artistic scene, and, last but not least, you must have the historical sense. The historical sense often lacks in many theoretical persons involved in art and new technologies because they are too interested in the hic et nunc scene.

Dutch scholar Annett Dekker is an exception. She’s part of Montevideo staff and she has been publishing numerous articles on vjing in the last years with the intent to historically define the movement also building up a network of connections among 80s and 90s video experimentations, aesthetic imposed by MTV, and the club scene.

Between 2004 and 2005 she collected the material of her researches on vjcultuur.nl web site, which offers crew and software links and contains articles and video interviews to pioneers such as Micha Klein, Arno Coenen, Gerald van der Kaap, and Geert Mul she asked to define vj’ing practice and history.

Claudia D’Alonzo: How did vjcultuur.nl come up? What are the main aspects you took into consideration to create the web site?

Annett Dekker: The website vjcultuur.nl is mostly a reference page. It’s a cumulation of the research I’ve done in the past years. I wanted to give all the news a place somewhere, to make a portal for people to find all kinds of information about vj culture. Unfortunately I haven’t got the money and time to translate everything in English, some things are but the interviews are still only in Dutch.

Claudia D’Alonzo: Who’s currently working on this project and what is the role of Montevideo?

Annett Dekker: I have started the project while working at Montevideo but as it grew I’ve done a large part with help of a Dutch funding body  fonds bkvb. We started a discussion in Montevideo years ago about what we could do with vj culture. after some research into the phenomenon, aesthetics and history we decided it was best to present it as it was meant for, as live performances of sound and image. not to confine it into a gallery space but look for the places were interesting developments were taking place.

Initially we tried to organise a large festival that would spread around the various clubs in Holland that had always been supportive of the vj scene (fe Mazzo, Off_Corso, Paradiso etc). but due to lack of money that plan was never realised. in the meantime i had discovered many things about the scene and spoken to many people about it and all this information i wanted to give a place, and also show a younger generation that they could build on a strong history.

Claudia D’Alonzo: Do you think current institutional art world (art galleries, museums, biennials) is adequately showing interest in the vjing scene or do you think it’s a hard work for this form of expression  apart from some exhibitions such as Documenta or Ars Elettronica  to be recognized as forms of art in academic environments?

Annett Dekker: That really depends on what you mean by adequate.. i think a few years back the vj performance was in many cases used as a decoration / nice feature to attract a younger crowd or be ‘hip’ for many galleries and museums. but now that the trend has faded, i think there are still many organisations including galleries who do want to promote vj performances and show new interests and developments and above all encourage the experiments. even though in the beginning the museums were more curious than anything else, it did bring about a reflection that opened up possibilities, which in the end is beneficial for all. but I’m afraid there is a long way to go if you’re goal is to end up in a museum, but then again would you want to be in there?

I personally think that these (new) art forms ask for different presentation formats and distribution, places not necessarily in the museum.

Claudia D’Alonzo: In an article published in 2004 you talked about vjing development, starting from the old school, which was a part of the counter-culture to the partial absorption in commercial circuits in the mid 90s. Do you think technological instruments globalization is the cause of this process or do you think there are other reasons such as the commercial spreading of some genres  i.e. house music  which have always been associated with video set?

Annett Dekker: Yes you can also think of the changing attitude of the artists, people were getting tired to throw parties which would get closed down by the officials. at the same time clubs opened that gave, at first, a lot of freedom for this new development. they would encourage artists to lit up their place and let them experiment with their own equipment. and soon the commercial side followed, but they saw a rise in economic value. they made the dj famous, and many vj’s also wanted to take part in the formulas for commercial success.

Claudia D’Alonzo: How do you think performer approach is changed in comparison to technology in the last decade? Young artists are more and more involved in technical processes. Is there a risk, in your opinion, to lose sight of audience synhaesthetic and emotional stimulus, which could be the final purpose?

Annett Dekker: Yes i would say so indeed. as i said before the whole commercialisation of the club scene caused for a different power structure, but it also brought with it the first standardized set ups, these laid down a structure that didn’t leave much to the imagination of the vj’s. when you don’t have any control of how your image is placed in the space and you have to work with certain sets this limits not only your creativity but also takes away the possibility of realising a synesthetic and emotional simulation.

But i like to make a note here – i am not talking here about those artists that are exploring the abstract or generated computer images as part of a technological process and see it as a new language. most of these experiments are done in the art and festival scene (like for example sonic acts and some performances at club transmediale).

Claudia D’Alonzo: How do you read the fact many contemporary artists are using analogical instruments, super8, and low-fi technologies again?

Annett Dekker: I’m not surprised, it’s not the medium that makes the experience and i think people are realising this. it’s not always necessary to have the highest resolution or the newest control devices to create a special atmosphere. most of the time the new technology is also limiting you in the things you want to do, you are bound to a set of pre-set rules and i can imagine people wanting to have more control. that is also the reason why a few years ago so many people started making their own vj softwares.

Another problem is that computers have for long promised all these marvels but till this day it is still difficult to generate real time visuals, so many people end up showing the same graphical loops over and over again pimped with computer effects . technology is fascinating in the beginning, and that’s what you hear from most beginners, they just freak out, use all the effects etc etc but after a while that gets boring and than you start looking for other rhythms, images and tools.

Claudia D’Alonzo: One of the problems rising from his studies on Vj culture is the way to preserve and document this kind of performance. How do the solutions can be for instance in the field of museum setting up, or live set reproducing?

Annett Dekker: This is still a large question and not an easy one to answer. it’s also a problem for other art forms, for example performance art, installations and computer artworks. at the moment we’re investigating the best ways to document a live event, not just on camera but also in words, how do you describe an experience? the latter is of course the most difficult but also the most pressing because that is what you’re after when you want to reproduce a live event. and than there are the questions of what to do with the hard and software issues. I’m not sure if a solution would come from museums because they are not used to these new ways of using the medium and space, people inside the ‘field’ should takes these issues up as they know much better what the specifics are that are needed.

Claudia D’Alonzo: In the last years many vj crews are publishing DVD and video collections. What do you think about this way of works distribution?

Annett Dekker: It’s a way to preserve your work and in some cases it can work, but in many cases the visuals become more like a video clip (at best) than anything resembling a live event. personally, i don’t think there is much life span for these kinds of events. but again it really depends also on the kind of work your making and bringing out. i think for more abstract work, that tries to find the subtleties between sound and image it could work. but in the long run i see it merely as advertising material for the artists and something to show people what there work is about. it will never take the place of live performances. they are just two different things.