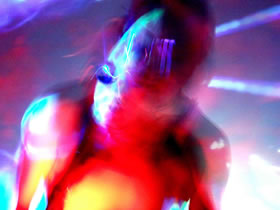 Nate Taylor aka Full Stealth is 30 and lives in New York. He’s an eclectic artist, he’s worked for the professional film industry for the past 11 years and some years ago he’s founded his own label: Full Stealth Films.

He’s a well known director and a famous vj, who describes himself saying: ‘If a picture speaks a thousand words…And video runs at 30 frames a second…Then the following are all 30,000 words-per-second descriptions of me’. His background as director clearly emerges from his vj set, where he use contemporary both the live video mixing approach and the filmaking art in his performances.

He’s always dreamt to direct a movie and today the Full Stealth Films is raising funds to produce an independent movie. The shooting is going to start at the beginning of 2007.

Elena Vairani: First of all, you’re a director and … how did you get envolved in vjing?

Nate Taylor: I’ve worked in the professional film industry for the past 11 years, experiencing every aspect of the field from driving grip trucks, to editing commercials, to now directing. I started performing live video as a creative outlet; an opportunity to try things that I could not do elsewhere in my world of filmmaking. My original concept was to partner with an electronic music-based DJ with very specific BPM songs. I would cut a series of short Quicktime clips to match those specific BPMs and mix them on two different computers; in short, I would beat match my clips like a DJ beat matches his record to the song currently playing. Unfortunately, it was too limiting to build a library of BPM specific clips: what if I had a beautiful clip at 120 BPM, but the current song was at 135BPM?

I realized that, in order to work with a more diverse range of artists and musical genres, I could create a large number of short, raw clips and spontaneously trigger them in time with whatever music was playing. That’s when I really started VJing actively. Soon thereafter, I began using VJ software such as Vidvox Grid and Livid Union which opened a new world of live video manipulation possibilities. I continue to add hardware and software to my rig, constantly trying to expand the capabilities of what I can do to video on-the-fly..

Elena Vairani: Hip hop, rock, raggae… you mix your visuals with different music genres, is always the same for you? I mean, which music is nearest toyour inspiration?

Nate Taylor: I enjoy mixing to all types of music. Each genre and individual performer provides a different challenge. Really intense electronic music, or any music filled with energy, draws the best performance out of me. In terms of my actual video output, a tight live band with a very active front man provides the best live camera footage (which in turn creates better final outputs). Every show is unique and unpredictable, though, based on the stage set-up, the performers and the crowd.

Elena Vairani: What about your live equipment? And can you try to describe the style of your typical vj set?

Carlo de Jesus, my live camera guy, is essential to my live performances. Unlike a traditional cameraman, Carlo does not shoot footage that is designed to be edited and viewed later; rather, he shoots specifically for the moment. Using his own distinct combination of snap zooms, dutches and drifts, Carlo sends me artistic and abstract live feed that is always crafted to match the music. He also watches the final output, and, depending out how I’m using his feed, will change his technique to create the greatest visual impact. I rely on Carlo’s live camera artistry and use it as the backbone for many of my VJ outputs. I combine his feed with other clips, distort and effect it, sample and scratch it. Since the work we are doing is heavily interrelated, we often form a symbiotic relationship through the course of a show, both simultaneously creating visuals that complement and enhance each other’s art.

I would describe my style as ‘abstract representational’. I predominately use original video clips of mundane objects (taxis, trees, crowds, fireworks, etc.), and then combine and warp these recognizable images with Carlo’s live camera feed (performers, the crowd, objects in the room, me, etc.)to make them abstract. Images become extremely dense and heavily layered as I get deep into a set, but the viewer still sees moments of recognizable images in the heart of the visuals. I’ve found that giving the audience something concrete and recognizable to hold onto is more powerful than creating wholly abstract experience.

Elena Vairani: Can you try to explain the differences of interaction and relationship you get with your public, when you’re releasing a short movie or a commercial or a vjset? I mean, which is the most important element you look for, is always the same (like the ‘surprise’ ) or different?

Nate Taylor: The best reaction you can get from an audience is in a packed theatre, when they are watching a film you have made, and they laugh, gasp or cry at the “right” moment. Or at the “wrong” moment. It’s fascinating to see people react to a scene completely differently from how you were expecting them to. Regarding the commercials I edit, I almost never get to see people’s reactions, since I don’t hang out in people’s houses while they watch tv. Sometimes I’ll be in a bar and see a spot I’ve cut. I’ll look around to see if anyone is watching it, but everyone is usually just drinking or talking, so I can’t really gauge anyone’s reaction.

One of my favorite aspects of VJing is the direct interaction with the crowd and the immediate feedback. I’m an extremely active performer: jumping around, thrashing my gear, and singing along if I know the song. When I start rocking out, I tend to not only get the audience worked up but the performers as well. The crowd also gets into some clips and video effects more than others. For instance, I have a couple of clips of one of my friends doing a really crazy dance in front of a bluescreen, that I can manipulate to move in time with the music. Any crowd, anywhere, goes absolutely wild when they see that. People also tend to get really excited when Carlo shoots the audience and they see themselves up on the big screen being manipulated and warped.

Elena Vairani: What about your plans for the future, both in direction and vjing?

Nate Taylor: I have always dreamed about making a full-length feature film, and am finally on the verge of making that dream a reality. My company, Full Stealth Films (www.fullstealthfilms.com), is currently raising money to finance an independent feature film, which I plan to direct starting in early 2007. I have a couple of small directing jobs on the horizon right now, but the majority of my focus is on getting this film produced.

In terms of VJing, I would love to continue to do larger and more elaborate gigs, maybe even go on a small tour if the line-up and timing was right. I’m trying to incorporate Ableton Live into my live set as a midi sequencer driving my VJ programs. People really love the live camera work Carlo provides, so I am going to incorporate some more cameras into the mix, mounted in interesting places like on the neck of a guitar.