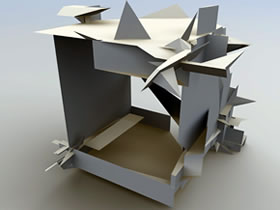 At first glance they seem experimentations of a young visionary architect, who attended the international modernism school but obviously influenced by the three-dimensional aesthetic of modelling software, more than by gloomy and threatening sceneries of the new videogames.

But the architectonic creations by Alex Dragulescu , Rumanian artist who lives in the U.S., have been generated by a program based on a unique input: the junk mail. The project Spam Architecture , part of a research with Spam Plants (vegetal forms generated by the junk mail) and Respam (net.art project who tries to map and collect the junk mail), is a fascinating attempt to give visual life to the huge flow of data generated every day by spam mail in our mail boxes.

The textual analysis of data (the recurrence of a word, the date of the message, the IP number of the sender) allows the author to select parameters that generate automatically architectonic forms. The result are grey and geometric building, characterized by aggressive and pointed shapes, by alternate floors with dark and deep cavity. Even if the shapes don’t remind of the data used for their generation, they clearly evoke the underhand and violent nature of the spam.

The criterions that inspired the project are the well-known information visualization , a discipline that studies the translation on video of the data (of any type: scientific, statistic, economic). Dragulescu approach is gone further than a conversion of the material into forms and colours. His attempt is to produce visualizations that are also evocative, with an artistic and aesthetic side and not only an experimental and technique one, particularly successful the spam-based .

It is also the case, for example, of Extrusions in C Major , that applies the principles of information visualization to the music, the classical music, transforming in images the Trio C-Major for Piano, Violin, and Cello by Wolfgang Amadeus Mozart.

The Rumanian artist, who’s just ended a Master in Fine Arts at the San Diego University, where he direct the Experimental Game Lab, carries out since years a research about the creative possibilities of the digital simulation, the algorithmic writing and the computing models, mixing with a rare equilibrium the experimentation on the code with the visual, narrative and conceptual needs typical of the best contemporary art.

Out of all his known projects there’s Blogbot, winner of the IBM New Media Award al Festival for Expanded Media of Stuttgart . It’s an agent software able to generate graphic novels based on texts found on blog. The bot sounds out the Net searching for a specific theme and produces a dynamic collage of images and text. The first result of this project is named What I Did Last Summer . A visual story about the Iraq war, that unites the texts of two well-known bloggers, witness of the conflict, with images from the game Civilization 3 .

The next versions of the software will have an implementation of algorithm based on the computing linguistic, taking the analysis of the text to a deeper level, the meaning one. As Dragulescu explains, “by analyzing text using computational linguistic methods, you can detect anger and sadness. Turning those into gestures in three dimensions, that would be interesting”.