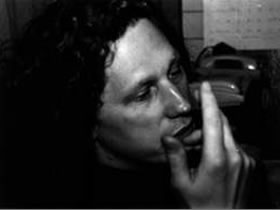 Arthur Clay was born in New York and lives in Basilea , Switzerland . He’s a multifaceted artist using music, video and performances and assembling acoustic and electronic media to create original works – for dance and theatre also.

He participated in international festivals in Europe, America and Japan , where his works were unanimously appreciated. Arthur Clay is an artist, a composer, and an inventor/scientist, he’s not interested in assembling media only, he actually conceives and designs new and very original musical instruments also such as Air Bow (a virtual Chord Instrument), Mirrorum (an optical sound generator) or Spaceball (a live video and electronic controller). They are perfect examples of integration among art, technology and new forms of AI the user can directly connect with showing possible directions and moral and artistic contaminations of the future to come.

The same kind of approach can be found during his performances such as Going Publik represented at the last Digital Art week, Music for Seven Strings, Suitcase Concerts, Music Light, Electronic Arts Performance, and Surreancè . All these projects show his will to investigate possible ways of interaction among performer, analogical instruments, and digital technology through computer aesthetic and technical automation forms.

This year, in July, Arthur Clay  with the collaboration of Jürg Gutknecht and Stefan Müller Arisona  organized in Zurich the Digital Art Week (whose report you can find in the last Digimag issue). It was a week event focused on performing surround made up of meetings of international experts exploring the connection between art and technology. We interviewed this American artist at the Manchester airport (where he was waiting for an airplane to Berlin ). We talked about his work and his artistic approach towards new technologies and forms of artistic AI and about his role as organiser and than spectator of the international scene thanks to his experience at the Digital Art Week.

Bea Bonfanti: Thank you for your disponibility in accepting this interview, I’d like to ask you something about your past: why are you interested in art connected to technology?

Arthur Clay: My interest in art and technology are similar in intensity, but vary origin. The interest in art is just a given factor in my life. My father was an artist in his own right and being creative was just part of growing up in our house. I cannot think of moment of my life  as far back as I can remember- in which I was making things from ideas coming from out of the blue. Not only art, but always creative and intensely so. My interest in technology goes back a few years when computers where gradually coming into general use. It is a simple equation: if you want to make a work for an orchestra, you study the instruments of the orchestra and if you want to use a computer for making art in any manner, one has to study it as if it was an instrument capable of aesthetic expression. It is and it is not and the any success in using it for an artwork will very much be dependent of the artist’s technical ability and aesthetic prowess. Not an easy undertaking!

Bea Bonfanti: Can you explain me when and how the Digital Art Week idea was born and your role in it?

Arthur Clay: I started the program about two years ago, because I had a deep interest in machines as art tools. Computers are simply the easiest machines to adapt fort he purpose of creating art. Of course, digital art or digital music. Also, my work as Director has had much to do with finding ways to cross stylistic boundaries in terms of genre and occupational boundaries in terms of artists getting somehow involved in research. This year’s program reflects this. Both the GoingPublik work for distributed ensemble and wearable computers and the China Gates work for an ensemble playing tuned gongs and being conducted by GPS as to when to play them, are good examples of how an artists can create works which are proofs of concepts fort he technologies used.

Bea Bonfanti: During the DAW in Zurich I saw your performance Going Publik. Can you explain me how this project works in the technical way and what happens when actors split up to play their trombones?

Arthur Clay: Going Publik è una collaborazione tra scienziati e artisti. The scores are controlled with motion tracking. Each performer has motion-tracking sensors on his body and when the performer moves the score which he sees in the head up display- changes in accordance to the movements. When the performers are not moving as a group, the changes are independent of one another’s, but when the performers move together, the scores are links in that they change together at a similar pace and manner.

Bea Bonfanti: During the Going Publik performance actors, dressed up like soldiers, play trombones wandering in a room. I’d like to know something more about your aesthetic expression choices.

Arthur Clay: The trombones are not really military and certainly not Swiss symbols. However, it is commonly known that trombones as well as all the other brass instruments- have been used by the military for their music. The use of camouflage uniforms during the performance not only gives the performance a unique  look”, but it comments on the use of technology in the defense industry, in that the works expresses an interest in these technologies. One could arrive at the conclusion that technology development could just as well suit the arts and the military defense industry.

Bea Bonfanti: Can you tell me something about the software you used and technical solutions of Going Publick project?

Arthur Clay: The software is a custom application written by Thomas Frey and the hardware is he Q-bic computer, which is a Swiss made miniature computer. The software measures the movements of the players and generates the score from which they have to play. The hardware makes this possible, as it is he only wearable, which has VGA output to be used with a head up display.

Bea Bonfanti: What are your future projects?

Arthur Clay: My next project is giving my family more time. After 5 years of working around the clock on art projects, it is about time to bring my wife some flowers (so to speak) and take my child to the park.