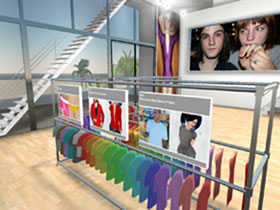 American Apparel is a clothing brand in Los Angeles which produces 210.000 t-shirts every day, it has 80 sales outlets in the world and one in Second Life. It is the first fashion brand in the real world to go in a virtual world with a shop opened in June 2006 and it is a strongly experimental example of marketing straddling real and virtual.

Aimee Weber in person, the designer who erected the building, created the internal fittings-out and refashioned for Second Life a series of garments of the American Apparel, tells us about the project. Aimee is a butterfly, she has a society of Virtual Content Creation and Services, she is the most popular designer in Second Life, already creator of the PREEN style of clothing, maker of Midnight city, of the planetary and involved in many of the most interesting projects of SL.

She immediately teleports me in a recently opened store, on a private island called Lerappa . It is a building with great glass windows, two-Decker, such as two regular overlapping parallelepipeds, rigorous and essential which takes inspiration from the Apparel’s store in Tokyo. She flies upstairs landing on a terrace with green armchairs and invites me in.

Aimee Weber: I created everything here, including the clothing.

You: is it the first real brand in SL?

Aimee Weber: the first clothing brand. I think it’s one of the first permanent arrival of a RL brand for anything though, other companies have thrown events but haven’t really stuck around.

The place is wide; there are the classical racks where the garments are hung, a counter and great pictures on the walls. There are T-shirts, swimwear and sweatshirts. They are presented side by side the real garments worn by real models and sold in the real world and the garments for SL worn the avatars and sold for the avatars.

Aimee Weber: if you RIGHT click it you can buy it

Aimee Weber: if you LEFT click it, it will bring you to the RL website where you can buy the RL item.

It’s enough to right or left click to change world. Either we open the window for the purchase of the garment in SL, in Linden Dollars, or we are led directly to the Apparel’s website where we can see and purchase the real garment. A t-shirt costs 300 lindens, about one dollar, and if we buy it for our own avatar, we get a discount to purchase the real one, which costs 26 dollars. Decisive and simple creation of a mixed-reality store.

The great pictures on the walls change like slide show; they are the same of the Apparel’s campaigns on the website and on the press with a perfect coordinated image. The place is lifelike but it takes advantage of some SL’s potential and the textures of the outer walls have been programmed to react in a different way with daylight and with night-light. So by day appear shining walls enlightened from the bottom and at night they have a dark texture enlightened by neon.

Aimee Weber: Well, the magic started with Wes Keltner, the Creative Director for a company called The Ad Option, he is familiar with American Apparel, has met with Dov, (Dov Charney) the CEOand he pitched the idea to them. And American Apparel has a cutting edge reputation, so it appealed to them! Then they contacted ME.

Aimee Weber: the rest is history

Aimee finds a sweatshirt with which she thinks I look gorgeous, she changes a parameter and offers me to buy it, “I lowered the price, lol, buy it now, for 3 lindens, its normally 300!” in brief she gives it to me.

Aimee Weber: left click on the box too, so you can see the RL website for it.

I reach the website and I find the sweatshirt in a page proof which is perfectly coordinated to the store. We can notice this concern for the design and I compliment Aimee for the very definite ideas: “I made the boxes look like the website, so it’s a smooth transition”. This theme of the transition from SL to the real world is the main point. For the moment it’s not possible a direct purchase and you have to pass by the society’s website which sells, but they are dealing with the problem:

Aimee Weber: well I have been talking to Robin Linden, and there are a few extra steps I want to take, so you can buy RL goods from right inside second life, without having to go to a website.

Aimee Weber: but it will require some added features, it will happen eventually

While we are looking at the dressing rooms Mistress Midnight arrives; she is Fashion Designer too but in a totally different scale; she works at home with Photoshop and a graphics tablet and she sells entirely in Second Life. With an inverse path she hopes to become a stylist outside the network.

Mistress Midnight: Well I started with a sketch pad, but I’m not into RL clothing-not yet anyway. So far I just design for Second Life.

In the first month of opening about 2000 garments have been sold in this store, but obviously the business isn’t the selling to the 300.000 dwellers of Second Life, but the visibility that a brand obtains with an operation like this, and also the emotion and the fact of having been the first.

Aimee Weber: the Idea is that Second Life is a frontier where they wanted to establish an advertising presence, bring their brand and advertise to our 300k Users in SLand when SL has a million users, American Apparel will already have a long established presence here. They don’t want to come late to the virtual marketing party, lol.

Aimee thinks that all this will happen in 2007 considering the exponential rates of growth of the dwellers and since many other RL brands will be heavily represented in SL.

Aimee Weber: There has to be some changes and Linden Lab is working on them. For example, they need to lower the barrier to entering second life. Right now, installation, registration, and learning second life take too long for it to be used as a quick business tool. For example, if I had an art gallery, I would love for my customers to be able to go to a website and instantly be in second life and walk around my virtual gallery that’s not possible right now. It’s too much work for customers to install and learn it.

What is supposed is therefore a greater integration between the virtual world and the remainder of the network, something that makes the transition from one to another easier and more immediate, and this not necessarily and only in order to the development of potential market. But there will be the market in the virtual worlds, it’s already arriving and we cannot be surprised. And like any other things in SL it has to be invented from square one, maybe better.

America Apparel explains its task: “We of American Apparel produce t-shirts without recourse to the off-the-books work. Our aim is to make profits on innovation and not on exploitation. We suggest a sort of hyper synthesis among capitalism and socialism. With an unceasing research of efficiency on the level of management and manufacture, we want to prove that the tactics of exploitation of the manpower are not only useless but also counter-productive. We think that an exaggerated recourse to a mistreated and underpaid manpower  like the slavery in the past  prevents the progress and the success of new technologies because it bases itself on an outdated and cruel vision of the human potential which penalizes the third world countries and the ethics of the customers.”

It seems promising to me as to be the first company to settle in SL, we hope it shows a new direction.

Aimee Weber: There are very few frontiers left in the world where you can lead the direction a technology or culture is going. But Second life is one of them.