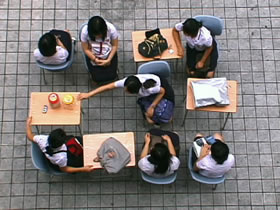 These almost thirty years old artists live this revolution at full without forgetting their cultural roots and the buoyancy of their near childhood. Their works have special perspectives and ways.

So Junebum Park (b. 1976 in Seoul , Korea ) changes a parking area  taken from above  into a playground in Parking , where he pretends to move cars and passers superimposing his hands on the shoot; while in Puzzle the displacements of pupil girls become a Boss-puzzle. Kuang-Yu Tsui (1974,Taiwan) casts himself in works that satirize warrior culture and shaolin martial arts films with Eighteen Copper Guardians in Shao-Lin Temple and Penetration: The Perceptive. This work documents the artist undergoing apparently serious, but ultimately irrational, training to become a Kung-fu master who can intuitively perceive things without physically seeing them.

The Chinese artist Wang GongXin (1960) satirizes karaoke with his video in which an enormous mouth and teeth frame a group of amateur karaoke singers. The Japanese Bak Ikeda (1964) uses computer graphic animation for his video narrative about emigrant and oppressed extraterrestrial creatures called PiNMeN. The one minute darkly comic PiNMeN episodes can be downloaded on video-cellular phones.

Kazuhiro Goshima (1969) and Mami Kosemura (1975) carries on tradition. Goshima’s series of digital animation videos Fade Into White # 4 experiments with image shading in an ascetic approach he likens to haiku  which is one of the most important form of traditional Japanese poetry. This video, shot in high contrast black and white, stimulates the viewer’s imagination “with a minimum of information.” Kosemura artfully arranges plants and flowers in formal compositions and records their growth and decay, collecting them together to create a moving image that records the passing of time, while referencing traditional painting practices. Rather than capture a precise moment in time, her large-scale projections depict the seasons of the year.

These artists, whose works of art are very different one to the other have a common leaning to ironically and inventively re-elaborate reality and a common mastery of production devices. Western countries should value this artistic scenario more.