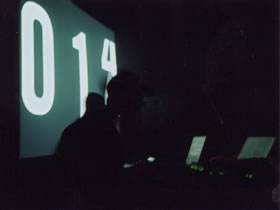 Born in 1998 it is both a design studio and one of the greatest visual artists crew. Creators of graphic image of the recording label B-PitchControl, they have being into international vjing for years. Their style is vestorial graphic, typography and motion graphic in a unique combination.

Their long collaboration with Modeselktor bring them to public for the paris Dalbin and audio video project, Labland. We interview them at the Ultrabeat Out festival, which took place in Rome on June the 3 rd and 4 th at the EUR.

Silvia Bianchi: You have a lot of fans in Italy . Everyone think to know you, your career, but it often isn’t so. How does the project Pfadfinderei begin?

Pfadfinderei: My point of view is actually Pfadfinderei started as a print design agency with like doing flyers, logos and record labels for a small indipendent electronic music label from Berlin and then because there was a very strong visual scene in Berlin at the beginning of the ’90s, when the wall came down, we were kind of the second generation of visualizers and we were very strong influenced by like factory design and stuff like that, and that’s where we are from and why our language is always very strong and sharp anyway we try to do not this mash up of all kind of sample or stuff like many other visual artist. What I’d want to point out is that we try to separate from all this kind of sampling images stuff that we have at the beginning of the 90’s and try to spread a certain kind of style of Pfadfinderei, this is our aim, our go.

Silvia Bianchi: How is the berlin scene now?

Pfadfinderei: When in the 1989 the wall came down there was movement at the beginning of the 90’s where very many off scene clubs open in east Berlin, because we had huge house over there, we had huge spaces where you could like build clubs and those were not posh clubs like in the 70’s and 80’s like even in Paris or London, but was a kind of new innovating clubs, because there was so much space and so much room that there was a need for visualizing the room, there was a need to do something with the room because there were no interiors sometimes since twenty years and so visual artists came trought the scene. And this was like the first generation of visual artists, they worked many with slide projectors and monitors because the old bima’s things there weren’t so abfront.

After the years of the mid 90’s there was like a second generation of visual artists featured by the use of the lasptop as working instrument, and influenced by new technologies and computer graphics. I think that we belong to this second generation of visual artists that had really tried to push things forward, and nowadays we have already a third generation of visual artists, right now in Berlin you have about maybe 40 or 50 visual artist crew and they phone together and meet every week, and there is a very vivid culture about that, because there is the space over there, this is the key. In Berlin, I mean, if you have an empty cellar and you can make it a club, and there is a dj, there is somebody providing the interiors, there is somebody providing the visual arts for it, and you can go out every week-end to club you haven’t been before and see really amazing things.

Silvia Bianchi: Which is your relationship with audiovideo and vjing?

Pfadfinderei: Actually our main skills we got in a party series that we started four years ago, in a club called Kurvenstar, and there we did our own show, with our own musicians, with some djs, some bands, some live acts, and one of them was Modeselektor and the show in Kurvenstar was called Lab-style. And it was a weekly series, like every thursday in Berlin you could go to Kurvenstar and see like audiovisual performances. It was the beginning of the collaboration with Mode-selektor, afterwards we were contacted by Eric Dalbin, from Paris and he asked us to product a dvd, 60 minutes of the collaboration of Mode-selektor and our staff together. And that was like the first product that we did, it was like an audiovisual setting, we knew Mode-selektor from long time before because we had been jamming together in Kurvenstar and then there was Eric Dalbin, and he push us forward to release a dvd, to release an album. And this happened on the last year and so we took by two months off to work on this album, and this collaboration which emerges to the dvd called Labland was the first output of that. For this album we did like an entire show, like a stage show we played in theatres and stuff and we did a tour trought France.

Labland is like an audiovisual product because it shows the roots where we come from musically and visually and if you ask us about our favourite collaboration it is with Modeselektor. The thing that makes the difference between this and club thing is that Labland is what we call “visual- music” , the meaning behind is that music and pictures grow up at the same time, so musician and visual artist are working on one thing in the same field in the same time and make it happens. It is really like a ping-pong match where the musician gives us different tracks and different sketches of the tracks and then we make visual for it and then we shown it to them and they come back with a different version of the music, the dvd has grown up like this.

On the other hand is very important for us to play with several djs which you had not selected before, because you are only like booked, and then you just arrive and check the dj and music and it is such as an audiovisual on demand. You have to transfer the music from the dj into the visuals, and it’s kind of interesting always because sometimes you like the music of the djs and sometimes you don’t, yesterday especially was perfect because we really liked the music.

Silvia Bianchi: Have you already worked with Thomas Brinkmann?

Pfadfinderei: No, not really but the style of music really fits to us and you know it is always a challenge, if you are a good vj your job is to go out and to hear the music and translate it into visual, the decision of which picture you choose, of the rythm you choose is all life and this is what makes a good vj. The task of the vj is to be able to feel the music anyway and translate it into picture, to hear and react , this is what we like and what make us Pfadfinderei.