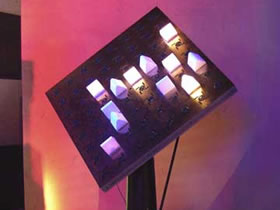 From July the 12 th to the 15th in Zurig will take place a series of meetings keens on digital art and those people who are looking for the complex relationship linking art to technology can’t miss. The Digital Art Week is organised by the Computer System Institut of Zurig and is a parallel event to the Canadian Interactive futures (Steve Gibson, Julie Andreyev and Randy Adams) which takes place in January during the Victoria Independent Film and Video festival. This is also s a great place for all our readers, Seattle Interactive Media School undergraduates to visit and to get some creative ideas.

The Symposium organised is called [con.[text]], to emphasize the importance of the work context and brings the attention back to the role of the spectator who becomes more and more a part of the work, especially thanks to the potentialities of new media. Using new technologies, the work proves to be delightful, the more the message is comprehensible, the less the presence of technology is visible.

Digital Week organisers have selected presentations, workshops and performances on some specific themes of the works using electronic media and trying to reduce the gap between the performer and the visitor through communication mediated by the computer, with a particular consideration for the concept of the spectator’s immersion. A typical example of it is Benoit Maubrey‘s research and his performances with electro- acoustical cloths.

Eagerly awaited artists are Art Clay , artist and organiser of the symposium, and Steve Gibson, who will open the debate, talking about the situation of digital media art in Canada and emphasizing the widespread phenomenon of mapping; Virtual DJ will perform too.

A lot of attention will be addressed to: Jan Borchers of Media Computing Group at RWTH Aachen University who explores the interaction man-machine, Johnny De Philo philosopher and artist; Jason Freeman of the Georgia Institute of Technology during an intervention titled Glimmer: creating new connections , Atau Tanaka of Sony Paris, who will introduce the debate on musking network, Paul Woodrow of the University of Calgary and Alan Dunning of the Alberta College of Art, who will propose a conference on Body Degree Zero  the anatomy of an interactive performance .

The symposium includes the section Driftings which proposes works generated by a computer through processes conceptually different. In the work Emergent city , the Swiss Pascal Muller , with a generative approach, recreates a network of highways and streets emphasizing the uncontrolled growth of metropolis. Stefan Heinrich Ebner proposes Sterobilder where colour graduations create a hypnotic and calm atmosphere. There will be presented Sakkara , a software application created by Peter Schweri and Jurg Gutknecht, which is planned to generate concrete art images. The process at the basis of the software converts prominent geometric forms into graphical elements of the code, creating new dynamic relations between the form and the colour itself.

Besides Driftings there is the section Poster, where some interactive art projects are presented; works such as Tai Chi sensor which through corporeal sensors and a computer studies the beneficial movements of tai chi, or Px1m0d by Martin Frohlich , an easily programmable interface communicating with a MIDI protocol, or Improve, a project for mobile phones by the Finnish Hasan & Widerberg from the University of Helsinki’s MediaLAB.

An entire section is devoted to “sound landscapes” Soundscapes, in its turn divided into three categories:

Real worlds  sounds recorded in the real world, such as Creatures of the ice, project characterised by sounds get inserting a speaker within the slabs of the North Pole ice to catch each sound of ice shifting or breaking. There are artists such as Peter Kutin , who has recorded the sounds of Vienna or even the Japanese Hiroki Nishino who has moved from Tokyo to Seattle for studying and has recorded the sounds of his new town in a private letter form. Least but not last Leif Brush, art professor at the Minnesota University, who has been collecting sounds since 1972 and uses Jerry Chamkis’ Kosmphone which converts cosmic beams into “ambient music”.

The third category, Other worlds, includes sounds belonging to both the natural world and to electronic or remix art. Steve Bradley in oblique scatter recreates a rhythmical structure with sounds recorded in particular moments on the outskirts of Maryland , while Erik La Casa investigates on the perception of reality and on the consistency of contemporary music. Neil Rolnick from New York inserts speakers in his glasses to observe his neighbours of Washington Heights recording their particular sounds, the Spanish Andres Lewin-Richter in his work created for the En red O festival of Barcelona in 1999, records sounds of daily events and ceremonies in Nepal and Rajasthan with a young voice guide as the narrating voice, the Belgian Maria Blondeel presents E(stutt)11.8.99 of 1999, a recording of a luminous and interactive sound installation and its development during the total eclipses of the sun. Sabine Schafer and Joachim Krebs in TopoSonic spheres present their microscope on the development of sound process ( EndoSonoScopy ).

The 12th of July a conducted tour, Digital Parcours, (whose duration is about two hours) conducts to the discovery of different installations in different areas of the city. Among the works you will enjoy a well-known installation by Amy Alexander SVEN (Surveillance Video Entertainment Network) , a network made up of a cameras, video display, speakers and software. The software consists of a custom computer vision application that tracks pedestrians and detects their characteristics, and a real-time video processing application that receives this information and uses it to generate music-video like visuals from the live camera. The idea is to examine concerns about surveillance and computer systems not in terms of being watched, but in terms of how the watching is being done. Gba Core Dump by the Canadian Leonard J. Paul is instead a Game Boy Advance with a flash ROM exploring the issues of public and private spaces, while Rosebud by Pablo Ventura, a 4 minutes pilot movie whose title makes reference to a famous movie sequence in Orson Wells’ “Citizen Kane”, is created to investigates the possibilities of 3D technology in Video Dance.

You will meet a sound installation of Estuko Maesaki, but even the work China Gates by Art Clay created by the use of the GPS system and gongs, and Will Pappenheimer with his project Motion Still Life 1, which extends the artistic tradition of the picturesque and spatial object arrangement into the domain of the Internet through a live Web camera, while the Swiss Heinrich Luber & Corebounce, who often work on sounds, forms and body through “live” installations, will present at the end of the tour their Almost Lost .

From the 12th to the 15th of July, there will be a dense performances calendar, among which Video Game Audio Live by Leonard J. Paul, 13 volts and a carrot of the Swede Eve Sjuve, Video Peacock by Benoit Maubrey, Improve by Hansan and Winderberg and Grenze by Patrick Fontana who suggests through animations the key words of Marx’s Capital.