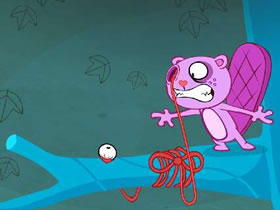 “The mess is the message “. This is how Wired magazine portrays the online video present situation. An explosion of aggregators , that is portals collecting and re-distributing different video materials and single Web sites such as vlogs, experimental animations, video-archives and newsletters.

They don’t offer with fee “recovering” of TV serials and high-cost productions only. The Internet, by means of a progressively faster connection, has become a virtual far West for new video-communication pioneers.

In most cases the only common denominator distinguishing them from the TV screen products is the shortness, which is caused both by medium, limited budget and communicative grammar which is more and more based on concentred and non-dispersive elements. The landscape is crewed and variegated as in a real free zone should be.

Amanda Congdon , who has become a cult by means of the Internet users’ pass the word, offers information and comments for free from her vlog www.rocketboom.com .

Among millions of animations and author videos there’s another web anti-hero Jerry , who received a nomination by the Emmy Awards for non-traditional (computers, mobile phones, and iPods) platforms category. On his web site www.itsjerrytime.com Jerry narrates  starting from a series of After Effects animated stills his every-day “real” life. S ingle middle American’s modest and freaky mania are imposingly represented by a collage-style assembly of bodies and by typical environments  home, street, restaurant  which become claustrophobic thought the collection of disproportioned details and false perspectives.

Battles with the tyrannical master of the house, moth-hunting, a new girl-friend keen of martial arts (menacing to break his neck in a moment of extreme tenderness), and two old ladies telephone jokes are just some of collective psychosis of single and urbanized individuals, who are bitterly real in their obsessive surrealist adventures. Video performance between a cartoon and a video-journal (Jerry is actually the only narrating voice) distinguishes Jerry from the arising endless and absolutely uncontrolled galaxy of productions.