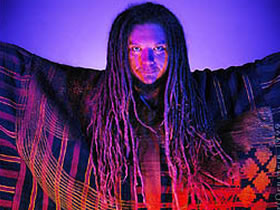 After Geert Lovink, Meet the media Guru meets Jaron Lanier, eclectic personality and specialised scholar in exploring and bringing the their extreme the frontiers of virtual reality. Lanier, authentic computer genius, is one of the pioneers of Virtual reality, ossimoro that he himself coined in the early 80’s, and co-inventor of the famous DataGlove, the interactive glove used to get into virtual reality.

For some time now with the National Tele-Immersion Iniziative, Lanier takes care of developing advanced applications for internet2, the network of the future, and the teletransport , that is, on his mind, the natural development of virtual reality.

INTERNET 2: FROM VIRTUAL REALITY TO THE TELETRANSPORT it is then really the title of the gathering that was held on May 9 th at the Mediateca di Santa Teresa in Milan in which Lanier illustrated the results of his research into the concept of Tele-immersion to which he is presently dedicated: that is, How do we get people to communicate at a distance reproducing the characteristics of a face-to-face conversation?

According to the scholar in fact, video-communication technology has failed to complete its mission. In his opinion videos-calls don’t have enough appeal and beyond the initial authentic enthusiasm there would be nothing, operating a type of addiction to the means. The surprise effect is not sufficient enough to allow the technology to persist. What in fact is lacking in video communication are those elements that characterises real life communication. That is that gathering of signals that our body sends to the interlocutor, the so-called non verbal language. A language made up or expressions certainly, but also made up of gests, of movements, almost ritual dances that can say more than the conversation itself even without knowing what the contents are.

Moving on from this consideration Lanier tries the recovery of virtual reality configuring a system able to “film” a subject from different points of view, which opportunely elaborated, would be able to restore the complexity of our mimics contributing in a significant improvement of our long distance communication. Lanier then presented Cocodex , software in via of perfection that will allow us to transmit, in real time through the network of the future, an enormous amount of information and “environments”, consenting communication and simultaneous actions of a person or group far away in space.

Lanier doesn’t seem to have changed a bit, nor does it seem has his absolutely unaltered interest in virtual reality and for its applications that don’t seem able to succeed in establishing themselves beyond the faith of their possibilities. Yet Lanier refuses this position. His interest is addressed, more than just the research into devices, to philosophical implications and sociological perspectives, which allow a wider and more complex definition of the issue, from the point of view of a cybernetic anti-totalitarianism.

That which seems to be the foundation of the thoughts of Lainer is what we could define “techno-humanism” away from the instinctive logic of adaptation that seems to identify itself with the economical politics of the computer giants. What counts isn’t the technology in itself, but an interactive understanding how the ability to reduce the waste between reality and imagination. A post-symbolic communication more and more free and open. The issue would be to be discussed.

Lanier remains in any case one of the most authorative voices of this discussion, and it was demonstrated by the lively debate following his lecture. Beyond the high-sounding title in fact, Meet the media Guru is, yes, an annual meeting with the international stars of digital culture, but it is as much addressed to the professional world as to the general public, in a relaxed climate of participation. Not a new experience, but all the same effective in following the proposal, on the Milanese territory, of a confrontation with the most qualified voices in the panorama of international digital culture, analogously to what happens in Face Au Present , the exhibition of the Centre Pompidou of Paris, to which the Milanese experiment is compared.

he next appointment is in October with Golan Levin member of the Aesthetics + Computation Group of MIT that uses digital technology creatively, highlighting the relation man  machine and exploring the intersection between abstract and interactive communication. At present busy in a tour in Japan , Golan Levin comes back to Italy after a year to present his latest project, in an involving meeting-performance, that makes use of theatrical, electronic, and computer-graphic elements.