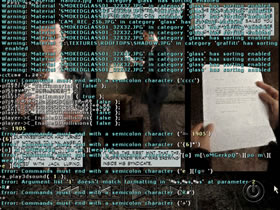 What happens on the screen of our computer can tell a lot about us, of our tastes as well as of our daily existence. Back in the far- off 1997, the project Desktop IS, by Alexei Shulgin, showed how a simple desktop screenshot might be an effective self-portrait.

Since then, the reflection on the narrative “screen grab” potentialities has continued, up to produce narrations more and more refined from the point of view of dramaturgy. An exemlpe which is becoming a cult on the web is offered by The Scene, a serial distributed on the web peer to peer building an irresistible narration which makes use of what happens on the screen of the main character, Drosan: chat sessions, webcams, programs opening and closing, telling the adventures of this group of pirates involved in plots more and more complex.

Videogames, starting from the suicide attempts collected by the English artist Brody Condon on the DVD Suicide Solution (2004) to the recent phenomenon of machinima, are certainly one of the privileged places of the action on screen evolution in narrative action, but even of its banalization, connected to the fact that effective action (through keyboard and mouse) has a prompt translation in the spatial, figurative and narrative conventions of the game itself.

With Max Payne Cheats Only (2005), recently showed in a video installation at the Electronic Arts Intermix of Chelsea ( New York ) , the Dutch duo Jodi (Joan Heemskerk and Dirk Paesmans) offers a personal way out from this risk of banalization. As Michael Connor remarks [1], the “screen grab” seems to connote the entire recent work of Jodi.

From MyDesktop (2004) , whose location is the typical desktop of a Macintosh, up to Jet Set Willy Variations (2002) and All Wrongs Reversed © 1982 (2004), which revived an old Sinclair ZX Spectrum to stage respectively some game sessions and ten little programming performances in Visual Basic, Jodi seems intent on staging what happens when the machine meets the man and his bent on mistake, game and passionate love for the past (the only reality belonging to him completely), his innate tendency to destroy his toys to solve the mystery of their nature. It’s a nerd game which can sometimes seem difficult to outsiders, such I am, but which, soon or later, manages to touch the facets we all agree with.

With Max Payne Cheats Only, Jodi abandons resolutely media archaeology and retro aesthetics, which had almost become his distinctive feature, to rush headlong into the noir atmospheres of a relatively recent classic, Max Payne . The hard boiled videogame launched by Remedy Entertainment in 2001, now at its third chapter, develops the story of a policeman become a criminal to avenge his family, wiped out by drug peddlers, and has gone down in history for being the first video game application of bullet time , the tecnique (become famous thanks to Matrix ) whereby time appears to be slowed down and which allows you to circle around the scene to study it from each possible perspective.

Anyway Jodi doesn’t seem to be very interested in history, and bullet time is only one of the many conventions overturned in his many “cheats” striking because of his practice of the “cheat code”, which generally aims at making the game easier to play cheating some defects or limitations. Such as an authentic gambler, Jodi gambles the game revealing immediately the pack of lies on which the conventions- which make us perceive the game as an alternative believable reality in which experiencing some adventures- are based on and makes of the disbelief suspension an impossible passage.

So Max Payne finds out to be made of the surrounding space material and to be able to pass through it to his liking, a discovery which let him sink into an autistic attitude inadequate to achieve the game aims. There he is struggling for freeing himself from a pole he seem to have become a whole with, run over by a car or squeezed by a press in an attempted suicide or there he is turned into a tangle of senseless structures, the polygon of his body flaking till becoming an empty cocoon, or converting himself into a mouth or an eye hanging in the air, involved in repetitive and meaningless actions, such as running on the same direction, or destroying a guitar, raining blows on the door, jumping under a ladder.

Sometimes Max is replaced by the naked avatar of his beautiful and sensual female counterpart – Mona – whose beauty makes even more pathetic her falling into pieces reminding you of the death of the Blade Runner android . Jodi wrote codes, loading them in the game and visualizing the results, recording all of them for a total of 140 hours. From this heap of material he gets a series of short videos. Each one of those has a dramaturgic unity, the two channels projection as well as the way they are put at everyone’s disposal on the website (three per page, performed simultaneously) underlines how what is emphasized is not their content, but the process and the meaning of the whole operation: the destruction of the fragile balance virtual worlds hold on, becoming the metaphor of the analogous fragility of our real world.