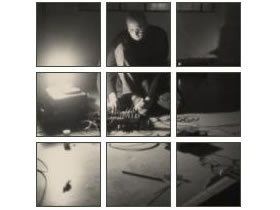 It is worth noting  for the Italian musical panorama- that a new record by Giuseppe Ielasi was released. I would like to avoid biographical notes and recording lists and focus on this new untitled disk of the musician, producer, distributor (ex-unfortunately after the recent closure of fringes recordings ), as well as organiser of little events which will bring big international musicians in our country.

Untitled was released by the Sweden Häpna – become a cult label- particularly attracted by Italian productions. It has published 3/4 Had Been Eliminated, Sinistri , and is not new to Ielasi too with which he published Gesine , to which we will refer often in the following conversation, where I tried to leave as much intact as possible the author’s declarations. Untitled is a very dense work, complex and stratified.

After a careful listening it is possible to perceive unexpected details, opening a wider imaginary, not fully declared. “The record- says Ielasi- is similar to the previous records Gesine and Plans. I have spent the most of my days in studio, recording what I had at my disposal. This time I used electric guitars, fender rhodes, percussions, erhu, different synths, record players. I gathered a lot of material last summer during a travel (all the sounds of a piano and many environments come from Latonia). I used some sessions recorded with Renato Rinaldi, during which we manipulated -with a Revox B77- various instruments. The single parts are recorded autonomously, often without knowing in which track they will be used and serve to create a collection of sounds I start from in order to define a structure of base. Stratification, often very dense, is a constant feature in all my works. In Gesine it was less evident, thanks to more homogeneous sounds (4 tracks for acoustic guitar and percussions, one for electric guitars one for lapsteel), but that record was equally complex and built in studio as this last one.”

It is useful to focus on the productive and technical aspects, which are certain reading keys, as the poetical aspect is hidden within pulsations and melodic rests. “The careful listening is always due to disch effects Ielasi says – and it would be very good to find out, every time, hidden details, shift your focus and understand structures and not immediate musicality. The mono dimensionality of most of the music I currently listen to is, from a point of view of production and technique, as well as of concept and structure, a huge problem. What is not declared is, instead, that is to say what the record really means to me, remains such.

The detail is a focal point: it is as if the work were structured longitudinally, as if it did not follow the linear development of the succession of events, but as if it acted deeply, following an additional direction, giving continually back layers and strange openings, never fully accomplished. In the fifth and last track, for example, when the noise structure starts to drop of pitch on the second half of the track, it remains the signs of a sound which could be ascribable to a vocal fragment, maybe a chorus. It is not important to decode the precise source, but rather to relate it to the “layers” of previous sounds, in this case incredibly full and narrative.

Forcing an analysis of this instant, which is maybe excessively complicated, you obtain a result in balance between the perfect awareness of the “layers” quantity we plunged into just before and, contemporaneously, the clash with a “non declared” condition. “It is exactly a chorus- tells me the Milanese musician  I do not remember where it comes from, but I remember that, when I was working on the last track, I realised that the final part was excessively static. I needed this sound to animate the conclusion of the record, instilling some doubts (and inviting to listen to it again). I usually do not care much about the origin of a sound, or about the meanings this can assume in a given context (even if there are sounds I would never use or, at least, never again). I’m interested in the function this can have within a track, especially if half-hidden as in this case. I try to make use of sound stratification as if I had an orchestra at my disposal ( in a composition for orchestra often you do not manage to follow the parts of the different group of instruments, but in the meantime you know everybody gives his contribution to the equilibrium and to the colour you are listening to). “

The different textures, the refined rhythmical structures- crooked at times- are further aspects particularly thorough and present. You can notice some influences, dub’s for instance, but the whole work is not easily ascribable to a precise sphere. Anyway, it is truth that this time I wanted the disc to have a constant “pulse” and the second track’s guitar note in tape-echo serves many to arouse listening memories etc It is even truth that I often want my tracks to be less codified. I would have liked Gesine to be the same, and in fact its tracks are built in a very “frustrating” way, in such a way so as to remove some possible grips. Unfortunately that record was released exactly in the middle of the fake weird-folk period, the last thing I’d have liked to be compared with. The day after the first review I gave my guitar to Renato [Rinaldi]”.

Gesine has a more complex form, deriving above all from the traceability of the instruments used, related to Untitled it is musically more direct, it is a compact record in which stratification is less clear and diverted by partly known musical-cultural references, the same ones Ielasi tries to avoid and, why not, destroy: ” Are really the differences so evident? -Ielasi wonders- Would you say the same for a crime-movie director who decides to direct a western, directing the same actors, using the same sound track or editing the same sequences according to the same principles? Each record is for me apart. I think the three records released up to now have a lot of points in common, except for the sequel of a previous record. I understand that critics, reviews and distributors try to ascribe them to different domains, but do not amaze if I mix things up. Besides, the superficiality of the critical approach, in most of the cases, is quite depressing. Almost all the reviews about Gesine refer to Loren Connors or Fahey. Can you explain me why? (Except for the use of the guitar, which is not much, I must say).

No, it is not explicable, if not for the reasons above mentioned connected to the superficiality of musical critics it is not worth focusing on. It is anyway proper to add- with regard to the cinematographic universe Ielasi refers to  that behind a choice of genre, lie by consequence a push and somehow an adhesion to the features and the rules such genre has. It is obvious that these rules can expand, destroy, overturn etc and it’s exactly in those interstices that innovation should be looked for.

In the end, a positive sign. During the press release of Untitled the definition “dark cinema” was used, absolutely appropriate, but it is undeniable how the tracks are infused with cinematographic atmospheres:” The relationship sound-image has always been very important to me- concludes Ielasi- and cinema has a great influence on me. Anyway, I do not work often with directors and video-artists, at least not on common projects (even if I often worked on movie soundtracks or videos already realised). For the moment, the only project I find stimulating is a collaboration with Eugenio Premuda, director and scholar of cinema, on a series of movies in super 8 (the first one, directed on the Straits of Messina has already been finished and we are editing the second one, set in Trapani). I would like to use images (in motion or not) even live, but up to now I haven’t found any approach convincing me, so I keep on playing alone, better if in the dark. For the covers’ images, I work almost always with Amedeo Martegani. We listen to the record together and we choose in a fast and intuitive way. Gesine’s images are instead by Eugenio, two Polaroid taken on the summer we were shooting in Sicily.”

Beyond any easy references of genre and context, Untitled, the new work by Giuseppe Ielasi, is a masterpiece.