Digital Sculpture Is Oriented Toward North 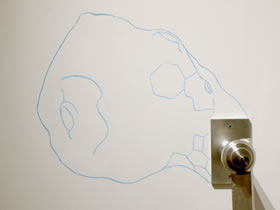 Sabrina Raaf, is a young but established Chicago-based artist working in experimental sculptural media and photography. She creates works of art linking science and technology, nature and mechanics. Her sculptures continuously relate to real world, but Sabrina alters familiar landscapes bringing invisible aspects back to life (these aspects are invisible since they are too big or too little).

Maybe the visions she proposes us exist in her artist’s mind only, but the world appears more captivating and “good” from her point of view. Sabrina dreams of a world where technology and research are at high human qualities disposal, qualities such as intellect that can intensify and enhance them putting them at community disposal. All her works look forward to a near future where genetic engineering, robotics, anti-gravity experiments, synthetic ecosystems, and biomorphic mechanical architectures will modify our time, space, sociality, and even nature perception.

In the following interview Sabrina tells us about her past and present and through the description of her last artistic work Icelandic rift  a lunar and in a way glacial landscape she saw in Iceland  she anticipates something about her future.

Beatrice Ferrario: How did you start creating digital works of art?

Sabrina Raaf: I began making art in the early 90’s using a camera. My instinct then – as is now – was to try to create images that carried the documentary weight of ‘the photograph’ but that didn’t include content that I could see with my own eyes. In other words, I wanted to create a photograph of a world that I couldn’t see, but that was ultimately believable to myself and to others. Software was the most powerful tool around that I could readily employ in the construction of these images. As I became more fluid with digital imaging, the work became more seamless and complex.

Betarice Ferrario: Where do you get your inspiration?

Sabrina Raaf: My inspiration comes from so many places – it’s hard to name any one of them as ‘usual’. But, as you might imagine from my last comments, I am fascinated by any scientific imagery which documents worlds that are either too microscopic or macroscopic to see. I keep up with various scientific magazines that cover advances in science, mechanics, and invention. And, I am a film and contemporary architecture junky. It may seem strange, but I rarely look to other contemporary art for inspiration – although I do really enjoy keeping up with what others are doing. This is probably because I feel as if the contemporary art world is too encapsulated as is, so I don’t want to propagate a self-referential model of art-making.

Betarice Ferrario: What does making art represent for you?

Sabrina Raaf: I struggle with this question all the time. Sometimes making art feels like it has a clear and high purpose – such as creating images, objects, and functional systems that illustrate a future place/time where our technology is designed to truly compliment and even amplify our most positively interactional and intelligent human qualities. (This is as opposed to the current tide of gadgets and spyware that end up topping the next landfill or pushing our sense of alienation from each other even further.)

Other times, making art feels like I am just creating my own personal escape hatch over and over again.

Beatrice Ferrario: What your last work is about? Can you describe it in details for Digimag readers?

Sabrina Raaf: My most recent work includes a sculptural series entitled Icelandic Rift. This is a series of structures assembled from industrial materials, stark and organic forms, and automated systems. These structures come together to form a modular system of organic architecture that plays on the viewer’s senses of scale and gravity. The Icelandic Rift sculptures are electronically powered works that include mechanical systems which function to automate lights and fluids within the sculpture body.

The structures in the Icelandic Rift series represent a future vision of agriculture and growth in a zero-g environment. It is a composition of artificial islands supported and connected by aluminum struts so that they can be assembled as part of a greater mechanical system that hovers above the floor. Together the architecture formed by these structures is designed to be perceived as both vaguely familiar and also austerely alien.

On the larger aluminum islands in the series sit smaller island forms cut from cast acrylic and/or aluminum. The island centers are hollowed out to function as reservoirs to hold Ferrofluid – a type of liquid magnet. This is a dense black liquid which spikes up when an earth magnet is placed in its proximity. Under some of these islands I have automated hard magnets and electromagnets that, in turn, automate the standing ferrofluid liquid in the reservoirs so that the liquid is made to spin, rise, twitch, or travel. These symbolize the energy sources for the systems. Other materials in the series include aluminum, cast acrylic, eurothene, ferrofluid, and custom kinetics and electronics.

I was in part inspired to create this work by the landscapes that I explored in Iceland in 2004. There, I saw breathtakingly monumental glaciers which seemed to float atop fields smooth black lava rock. In other parts of Iceland, there were endless stains of acid green sulfur on the earth as well as steaming blue pools of heat-loving algae which defied one’s sense of “the natural”. The landscape in Iceland is famous for its lunar feel but its elements seemed to trump gravity and logic in ways that were utterly unexpected. I am also drawing inspiration for this work from the multi-tiered design of staged, hillside agricultural systems such as those seen in Asian rice terraces. Last, I am drawing inspiration from the soft design forms found in domed space observatories, water droplets, and BioSpheres.