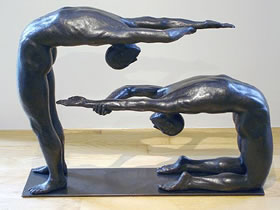 To this end it is interesting to have a look on the outcomes of a study realized last year by some of the scholars of the Baton Rouge Louisiana State University . In the paper Collaboration Paradox: Scientific Productivity, the Internet, and Problems of Research in Developing Areas , published by Social Studies of Science (October 2005) , Ricardo B. Duque, Marcus Ynalvez, R. Sooryamoorthy, Paul Mbatia, Dan-Bright S. Dzorgbo, and Wesley Shrum reflect on two “axiomatic” practices of modern communication science:

1 – is collaboration associated with productivity?

2  is access to the Internet (specifically use of email), associated with reduced problems of collaboration?

Why did they choose to investigate on developing counties? The response is quite simple: it is necessary to systematically make sure (not only in wealthy democratic systems) new communication options offer possibilities of collaboration and integration among different countries since these technology are suitable for overcoming geographic, temporal and  often  political barriers.

The study took place from 2000 to 2002 and 918 scientist predominantly from Nairobi, Accra, and Thiruvananthapuram were involved. Their scientific training was essentially agrarian (31%), bio scientific (28%), engineering and information technologies (16%), chemistry and physics (9%), geology (7%), social sciences (8%).

Researchers used different investigation approaches: from interviews to the analysis of scientific programs and samples. They furthermore verified instruments of selection and exclusions of components to validate the groups composition mechanisms. It was very hard to implement a scientific productivity measuring device. Researchers decided to put traditional bibliometric methods aside (this is a scientific standard quantitative system that involves, for instance, citation analysis) since they reflect the predominance of developed countries. They used last five years publications in national and international newspapers (both verified and self-reported by authors) as the main productivity indicator. Productivity was determined both by intra and inter-organizational measuring devices.

Intra-organizational measuring device involves the mapping of constant and regular relationships among the people in the organization. Inter-organizational measuring device rather involves the mapping of different groups on the outside and a measuring scale of collaborative rate of recurrence. Data collected were re-elaborated in respect to geographic, demographic, and biographic (sex, age, marital status, educational level) variables.

Among the various outcomes it’s interesting to highlight Kenyan scientists, who are the least productive, have difficulty with email access and report the most research problems, manage to collaborate a great deal. It could sounds obvious but collaboration is harder and costs are higher in some developing countries. In most cases the main subject is overturned in behalf of collaboration, that is, coordination costs turn out to be lower in comparison to the benefits produced by intellectual forces coordination. As a matter of fact communication (and outcomes) troubles are higher for third world scientists. These are troubles relating to the difficulty in contacting colleagues, coordinating programs, transmitting updates and above all preserving information security.

Let’s answer to the second question (possibilities of collaboration problems reduction offered by the Internet). The internet seems to be very appreciated and used, but non homogenously spread (86% India , 65% Ghana , 51% Kenya .) From a pragmatic (or better ethnographic) point of view elements show in developing countries there are tough local contest troubles that the Internet and collaboration can’t overcome: poverty, corruption, familiar duties and clienteles.

To outline a future techno-scientific scenario it is necessary to differentiate communication promotional politics involving environmental relationships. That is it is essential to cease using a neo-liberal conception of communicative system self-regulation; we don’t have to promote new technologies only because they produced excellent outcomes in technological advanced countries.

Latour emphasized the impracticality to separate techno-science from society because it is a separation that comes out of nature and culture, so let’s stop separating communication of practices that create environmental reality in the scientific research field too.