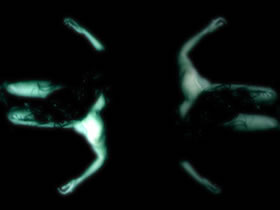 Talking about video dance today is no longer “complicated” as it was some years ago, it is no longer a place alien to the most significant visual arts, and it is no longer a “new vanguard” or just an élite contemporaneity. There is already a story documented by books, VHS or DVD, a short story, a path born unconsciously with cinema, continued with television and video up to make a name of itself in America in the 70’s with Doris Chase and with a further evolution thanks to interactivity and the net.

Today there are, luckily, festivals, retrospectives, conventions and workshops. The only flaw in Italy is connected to didactics. Video dance had to “get used” to digital and the enormous potentialities of the new code allowing different visual and sound stratifications. The desappearance of the dancer happened before by analogic ways of video editing then by virtual ways of simulations rather destabilising but perceptively of high quality. Coreography is enjoyed and the final work becomes an elaborated and redecodified happening.

The 14th edition of the festival The Electronic Choreographer will start on Thursday the 11 th of May 2006 and will go on the 12 th and the 13 th , at PAN – Palazzo delle Arti of Naples , conceived and directed by Marilena Riccio. Pan houses and promotes a “historical” initiative at its 14th edition. The only festival in Italy to be devoted to a particular use of the electronic device together with the most innovative chorographical research, beyond hybridization and interferences between video, theatre and cinema. The aim of this international manifestation of video dance, born in 1990, is to boost dance, the activity of dancers, directors, choreographers, scenographers, musicians and video makers encouraging their tight artistic collaboration and has become an international point of reference.

Projections and meetings with the authors will take place every day from 18 to 23. A tango spectacle -on the 11th at 9 pm -and the live performance- on the 12 th and the 13 th at 9 pm- by hia radanza OBJET D (choreography and interpret Marika Rizzi with the technical collaboration of Vidal Bini) will enrich the schedule. The 150 videos which entered the festival come from all over the world: Italy , Greece , France , Canada , Germany , New Zeeland, Argentina, Australia , Belgium , Switzerland , Slovenia , U.K, Lithuania , South Chorea, Hong Kong , Slovakia , etc…

A special mention should be addressed to this year’s jury. The President Paola De Simone has a piano education and historical-musical studies which soon lead her to a close militancy in journalism and didactics in the field of music and dance. Annouscka Brodacz combines cultural activity to artistic activity in the field of dance and theatre. She studied contemporary dance in Rome (Elsa Piperno, Nicoletta Giavotto), Paris (Linda Davis, Karen Steel, Lukas Hoving), New York (Ruth Currier, Alvin Nikolais, Martha Graham, Merce Cunningham,Sara Sugjara, Nini Melvin ). Wibke Janssen , born in Hamburg , studied music at the Hamburger Musikschule as well as pedagogy. She created bands and studied as a dancer and as dance teacher at the Erika Klütz Schule of Hamburg , where she worked with Mary Wigman as her assistant too.

Beyond organising video projections and live performances the main aim is to promote internationally video dance and its connected artistic activities of national productions, through visibility granted by an international collective: to provide information concerning festivals, video dance retrospectives and all the chances to promote productions, artists and curators, share knowledge and favour the diffusion of press articles, essays, programmes and making them available on the web besides proposing Italian and European tours such as Dance & Video in Milan in 1994, Review of Video dance of Genoa on the following September.

In 1997 took place Videodanzando movimenti tra corpo e monitor ( Video dancing movements between the body and the monitor) in Palermo at Spazio Blu Cobalto, the Merano TV Festival , the Monaco Dance Forum 2004 , at Grimaldi Forum of Munich, Frammenti di danza – Rassegna di video danza (Fragments of video dance- Review of video dance) at the National Gallery of Modern Art of Rome and SHOOT – Dance for Screen , at the Modern Art Museum and Modern Dance Theatre of Stockholm. In 12 editions of the international festival of video dance the promoting association has gathered an archive made up of numerous videos, which, year after year, have been selected within the different sections of the review. This lead to the creation of a cospicuous, precious and unique video library documenting the birth and the development of this recent and innovative language video dance represents. The promotional activity had one of its most qualifying moments with the participation in the “Terpsychore” European Network for the preservation of the audiovisual Dance Heritage, European Commission-Raffaello programme, as well as the realisation of an intense scheduling of seminaries and expositions.

1991. The Electronic Choreographer takes place at the seat of the French Institute of Grenoble and with a jury presided by Vittoria Ottolenghi and made up of Elisa Vaccarino, Gérard Paquet, Adriana Borgonovo and Michel Doucin. Thirty are the Italian videos. Tuffo nell’acqua e tonfi del cuore (A Dive into Water and my heart skips a bit) was given the award, a 10 minutes’ video directed by Cinzia Romiti (who is the author of the choreographies too with the collaboration of Laura Balis Giambracono) . From this moment on a spectacular meeting of strongly motivated artists coming from all over the world starts and they were “gathered” in Naples on the occasion of this festival unique in its kind, each year more and more spectacular as well as professional.