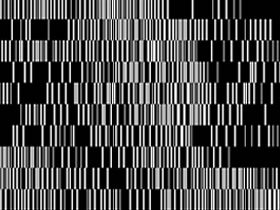 The net art author we’re talking about in this article is very mysterious because he never shows himself in public and he doesn’t say anything about his origins (even if his web site seems to be registered in France ). The only thing we know for sure is his name (or, better, nickname): Jimpunk .

We wanted to interview him but he’s not interested in talking about himself. He prefers other people to say what they think about his works. Pulp.href is the last one. He also collaborated for 56KTV Bastard Channel , we talked about in December 2005. Jimpunk, who won the One second video festival, creates video-art with “second hand” fragments. A real trash TV related to the philosophy of picking up from the net to create works of art, in an endless re-collection and re-use of files without copyright (if it’s not a Jimpunk’s one).

The artist’s web site is anti-communicative par excellence. Basically, with It’s 80s atmosphere it’s only for nerds . You don’t know where to click, there are letters apparently without sense that comes from a stylized pc keyboard. You have to move your mouse on them to finally obtain an intelligible informative fragment.

The same feeling of bewilderment you find in the pages of the Pulp.href project, the author himself defines: “an electronic instrument, or something like”. Once you have downloaded the page (you need quicktime to do it), the screen is divided into two areas: in one area there’s an innocent display, in the other one there are the first six letters of the alphabet placed in two lines repeated till the bottom of the page. The disposition of the letters in every block prefigure the division of the screen once you follow links.

To every block corresponds a video, the same video for every letter of the block. If you click on (a) you’ll activate the up-left rectangle , on (b) the up-centred rectangle and so on. After a few seconds the first raw of videos will be repeated almost covering up the lower area of the screen, where links are, inhibiting every user’s action. The only freedom Jimpunk leaves us is to close the browser window to stop it.

Videos used last two or three seconds and they are endlessly repeated. Images were manipulated with filters to shade them. The subjects are various, without relations one to another.

This work of art seems to follow that new media trend that uses one screen to show different programs. The idea of working with many open and autonomous windows, which was born with the PC is extending to TV too to give audience the possibility watch two (or more) programs at the same time. This is very popular yet so Pulp.href is not a very original project, it’s just something you’ve seen yet.