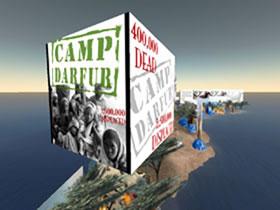 It was born from a collaborative work of some members of Omidyar.net, who, some months ago, have decided to create within this virtual world a place of reflex ion and raise of awareness on the violence and atrocities ongoing in Darfur , the occidental region of Sudan .

They have built on Better World Island a 3D refugee camp with the aim to give information about the ongoing genocide in Darfur , gather funds and create links with the main associations and campaigns concerned about Darfur.

Three years after the crisis, according to recent data of World Food Program, of UN and Coalition for International Justice, 3.5 million people are starving, 2.500.000 are displaced and have taken refuge in camps and 400.000 have been killed by the Janjaweed militia’s brutality with the support of the government. It is a situation presenting analogies with the genocide in Rwanda in 2004, where villages were razed to the ground, women were raped and the situation was even worse due to the deliberate destruction of food and water supplies.

There are hundreds of associations worldwide focusing on raising awareness about this ongoing genocide and demanding the government to undertake a stronger and more effective response to the atrocities plaguing the civil population. Camp Darfur promotes Save Darfur Coalition initiatives gathering in the US hundreds of organisations humanitarian, pacifist and for the defence of human right.

Among the tents of Camp Darfur , you can find information, multimedia shows, posters with short and incisive refugee stories, maps, the reconstruction of a camp with its kitchen, its tend with humanitarian aids, sacks of rice and Red Cross packs. Huge boards show slides containing images of the genocide places, burning villages, faces of the refugees and of the children, campaign claims.

“Basically a group of better world scouts believed that it was time to make this situation real for people” tells me In Kenzo, one of the creators of Camp Darfur, “People do not want to think about it or believe that this is happening in 2006”.

I interview her at ManorMeta , a meditation space just in front of Camp Darfur: “ManorMeta is a meditation space, our hermitage and gathering space for better world design, it’s also our living experiment in what it means to be a participant in a better world” says In Kenzo. The place is an authentic example of creative architecture in SL, evolving constantly with fluid forms and transparent surfaces. It is the meeting place of Better World Scouts. I ask her for some information about this group: Better World Scouts came from a few of our group on the Omidyar Network who shared a vision for world changing. Sue Stonebender built the island and helped the group come together”. .

“Who has helped you build Camp Darfur ?” I ask her. In Kenzo: “Zeke Poutine, Riversong Garden , Jamie Neutra and I did most of it”. I am not talking about some fanatic player spending the day on internet losing contact with reality. They are the promoters of the events taking place in favour of Darfur . They have just finished a live camp in San Francisco and in Los Angeles (where Spooky performed) have spent five days explaining the ongoing genocide in streaming on the web and next event will be a huge rally in Washington DC . The organizing experience of Camp Darfur in SL derives from those real events: 15 tents, posters, photos, videos, conferences and debates.

Here you can find many links to reference websites of organisations related to Save Darfur and it is possible to act in person and join the Million Voices Campaign in order to deliver 1 million postcards to President Bush demanding that he promotes multinational initiatives to help Darfurians. It is an experience in progress- explains me In Kenzo: “we have not put all of the interactive elements in at Camp Darfur in SL yet, we hosted a film festival for four days with FilmAid International. The video walls will come up this week and that will make the experience more real”.

An interesting experiment on the way to talk in SL about such a difficult subject – agrees In Kenzo-“it’s not easy to know how to talk about it, especially with kids…..in the virtual world our challenge was making it real while not making it a bloodfest”. “Genocide is a difficult issue to address and we’ve received a mostly warm response from those who visit….but there’s also some reactionary frustration and outright hatred and violence thrown at this island for what we do”. Less than a month after its opening, Camp Darfur was visited by hundreds of people, but destroyed too by an avatar identified and then banned by Linden .

It is a virtual and real world combination : a virtual space as a lab to build something better. The big photos of refugees’ camps surrounding the camp, rebuilt in 3D, extend the virtual space in favour of the real space, perceptively as a scenography, but metaphorically as a window on the real world and on its tragedies seen from inside here.

In Kenzo must come back to a live camp, we say goodbye to each other, but before going she makes an open invitation to everybody to take part in a Better World Island project initiative: “we feature organic spaces all around……encourage everyone to get involved, not only in camp Darfur but by bringing their passions and projects to Better World Island. The people who have built this island are extraordinary in so many ways and there are many good ideas floating around here. This is just the beginning.”

t is true. This is just the beginning.