Sven And The Creative Video-surveillance 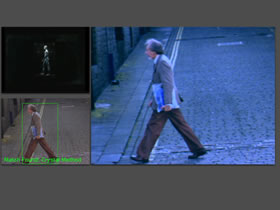 Every day we leave a variety of uncontrolled traces of our passing and actions. As a matter of fact new technologies extend our possibilities and make us more visible and identifiable. Television cameras, mobile phones, satellites, and personal computers give us the possibility to monitor our actions and constantly “spy” our lives.

As time goes by our judgement on video-surveillance has changed. We initially thought it was a damaging to privacy technology, but now our judgement has changed, we think of it as it were a means of  mainly psychological  protection against criminal actions in various contests.

In particolar after 11 September 2001 video-surveillance became  in the imaginary of the people  an important preventive measure against terrorism. The presence of television cameras is substantial in certain areas. The demand of facial imaging television cameras has considerably grown up.

Television cameras implemented with AI algorithms, in particular biometric facial imaging give us the possibility to compare the images of people taken with the database of photographs of terrorists and criminals we have.

The set up and maintenance of these technologies are very expensive and they are in great demand even if they are not always effective in the prevention of crime and create false alarmism. These technologies are useless in the case of particular terrorist attacks  the ones coming from the sky for example  and there is a high risk to produce tragic accidents due to erroneous identification, like for example the case of the young Brazilian guy who was shot by Scotland Yard’s agents in the underground last year in London who was completely not connected to terrorism.

Amy Alexander, Jesse Gilbert, Wojciech Kosma, Vincent Rabaud, Nikhil Rasiwasia in a way pull these technologies’ leg demystifying them by bringing them into question through their mechanisms, creatively reinventing their use to implicitly criticize the whole defence/control system. .

The project SVEN – Surveillance Video Entertainment Network , aka AI to the People ironically brings a certain way of using technology into question, the technology which enters by force our life and qualify a person on the basis of some conventional parameters. Is there a possibility to use the technology which is now used to discover if you are a criminal to reveal you possible inner talents?

The group of persons who created SVEN works by means of a system which generates real time video performances. This system consists of a television camera, a monitor two computers which can be placed in public areas where a surveillance camera is supposed to be.

The television camera shoots the space and a particular algorithm installed in one of the two computers reveals some characteristics of the passing people. In the case of the look of these persons is close to some of fixed parameters like for example a potential rock star look – standard camera vision is interrupted and a real time video processing application starts to elaborate images to generate images which look like music video. The video is then shown in the monitor placed in the public area.

SVEN is a developmental work in progress. For instance they’d like to put a camera on a mobile platform (on a track for example). During ISEA 2006 ( San Jose , CA , US ) you’ll have the possibility to see their installation.

This project – with its critical potential – bears a resemblance to the Surveillance Camera Players‘ work. This group was created in 1996 in New York and ironically manifests its opposition to surveillance cameras because the group thinks they damage basic human rights and they are also useless to prevent crime. Their first performance was Ubu Roi by Alfred Jarry . Their last performances include 1984 by Orwell and waiting for Godot by Beckett. The 19 and 20 March SCPs took part in the international days against surveillance cameras.