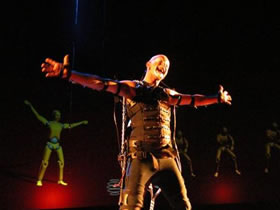 There are rare example of use of the technology Motion Capture in the prose theatre, as this is a modality more frequented by the digital choreography or special effects cinematography. To experiment the expressive potentiality of the machinery-body associated to data glove, an artist eclectic such as Roberto Latini was necessary , recognized as the talent of the new Italian research theatre.

Latini is supported by Gianluca Misiti , a creator of elabourated sound partiture, by the interactive designer Andrea Brogi/Xlab expert of the ambient and characters 3D animation and by the videomaker Pierpaolo Magnani/Xlab-Dn@ for the video in chromakey. After an artistic staying at Pasquini Castle of Castiglioncello for Armunia, Latini, already author of the theatre project Radiovisioni, creates and plays alone in the scene (in Tuscany at the Cecina and Pontedera theatre) a strange Ubu Incatenato , sequel of the more famous Ubu RE of the desecrating and biting pre-surrealist (or pro-dada as the historic Henri Béhar define him) Alfred Jarry.

Played in 1937 (that is 47 years after the memorable representation of the Ubu Roi at the Théâtre de l’ Oeuvre in Paris) with the sets of Max Ernst , this text tells with modern humour the stories of King Ubu who, after his reign in Poland, is about to get rid of the collective alienation becoming voluntarily slave, means the most free of the men. A theme, this of the exaltation of the slavery, that lend itself to interesting actualization and different interpretation, as Latini says: “Father Ubu is an example for lots of people, who try to chain their selves though their freedom. Freedom and Slavery are inside the same concept”.

A mechanic sets (typical Ernst style) on two floors, plenty of old household appliances, tools, binaries, that remembers the artistic assembling on a random method, typically surrealist, a sort of background for this piece for actors and machines.

The sets is composed by three panels where 3D ambient, images from a webcam, pre-recorded videos and characters managed Real Time directly by Latini are projected. Latini uses a Motion Capture suite with whom King Ubu, with his auto-imposed enslavement to obtain the real freedom, becomes chained to the technological machine. Other characters are created with computer graphic and moved by the virtual glove or alteration in the voice tone.

Between continuous irruptions in the present, from songs to reference at the actual politic, Latini plays with extraordinary ability the utopian role of puppet-actor “(evoked by Jarry himself in the 1986 About the uselessness of the theatre at theatre ), the actor-machine and the paradox of the actor: “It is a paradox that determined the modality of research. Maybe because of the reflection on the actor, of the staying on the stage, on the being author of our self, and maybe because of Jarry compared with Ubu, for its grade of relation, belonging and dependence, the most interesting question is the one about the identity, the point of view, the role. We searched a way to be at the same time Ubu and Jarry. So not just the puppet and the hand who animate it, not just the puppet and the puppeteer, but also the author in front of the forms that become their own works”.

A haughty prove who evidently puts this Ubu between the most significant examples of the theatre in the digital era . A theatre who affirm the centrality of the actor, vital fulcrum of the scenic experience whom bodies interfaced allows to give life to the entire show. The cyberactor return to take on the characters of the Super-puppet profetized by Craig , of the “man-ambulant architecture” of Oskar Schlemmer and the mejercholdian biomechanic actor who says “the body is a machine and the actor the mechanic”.