Hans Schabus And The Very Pleasure 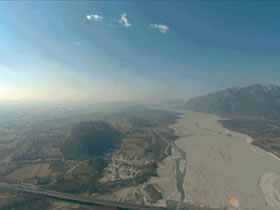 The artistic collaboration between the Austrian artist Hans Schabus who inquires mainly into the space and The Very Pleasure duo (composed by the Austrian artists Oliver Welter, who’s the singer of the band Naked Lunch and Fritz Ostermayer ) turned out into an interesting event which took place at the spaces of the laboratory of Teatro alla Scala.

On the wall of an enormous hangar was projected the video realized by Hans Schabus Val Canale, while The Very Pleasure duo was playing upstairs almost invisible to the audience (at a sort of mezzanine floor which covers a part of the area of the hangar). The songs (both covers and new songs) were focused on the theme of the mountain.

The video projected is a trip along the border between Italy and Austria  so the Val Canale, which is trapped among the mountains. The artist shot from the helicopter all the bounder in a very long sequence plan, without interruptions; the result is an hypnotic work transmitting the sensation of voyage. The Very Pleasure’s performance was surely a completely pertinent sound comment, a serious and inspired music, which is frequent among the Northern bands.

The final result is a performative event of a great impact for the audience; the hugeness of the projection and the sound wrapping up the whole (empty) space projected the audience in an intense reflexive dimension. It represents an actual metaphoric voyage for the audience. Also, shooting the geographic frontier between Austria and Italy is a symbol of the voyage of the artist from Vienna (where he lives) and Milan (where the projection was shown).

This is not the first time Schabus refers to the theme of the voyage. In one of his precedent works Western shot his trip on a small boat he self made along the subterranean channels of Vienna . The result is a romantic adventure between dream and reality. Shabaus is an artist investigating the space he tries to re-define travelling through it; the starting point of his works is the history of the places where he’s intervening.

For the Biennial of Venice 2005 , Schabus presented Das Letzte Land covering the Austrian exhibition area with the reconstruction of a mountain; it was a computerized model, a techno mountain. It seemed very intimidating from the outside but it was actually accessible from the inside; mounting along a system of staircases you came to the top where you can see the whole Venice from a window. His intent was to make the work emerge in spite of the space (in this case a public space with a very important past) where it was exposed. This explains the decision to cover the exhibition area.

So Schabus gets possession of the space to re-create it, he every time imposes the space different limits you can control and physically enter in it giving us more consciousness and perception of the space around us, which is perceived as a sort of outer space, out of limits and structures.