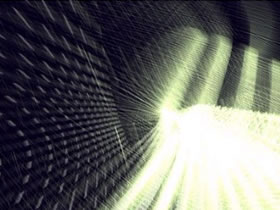 Kinotek is a duo of video performer from Rome, composed of Mattia Casalegno and Giovanni D’Aloia . They try to build up audio-visual ambient using the languages of the new media arts. They move with confidence between the area of club vjing and the area of abstract performances, with the objective to experiment the different modalities of interaction between technologies and performances. Through the stratification of hi-tech dreams and analogical memories, Kinotek propose extremely interesting contemporary glances at possible dreamed worlds and not.

Most of all Mattia Casalegno assumed during the last two years a role more and more prestigious, not only in the national ambit, but also in the international one. He got in contact with lots of different artists, not just electronic ones, inside contests and festivals of absolute relief (as the last edition of Mutek), as he accompanied with his visual the performances of Maurizio Martusciello aka MartUx_M.

He’s the one we will interview, to get in touch with the work and the aesthetic of Kinotek, and talk about the electronic-minimal group MetaXu and the collective of Italian electronic artists Avatar 41 ° whom Mattia Casalegno is part of.

Bertram Niessen: First of all, I would like to have some information about the way you work and the software you use. Besides, are the contents of the video performances created by you or is it an operation of found footage?

Kinotek: Talking about the live-media projects or the strict collaborations with musicians, or even more specific works, we rather create our instruments with programs as Max/Msp/Jitter o Isadora. Talking about the vjing situation, we lately found Modul8 by GargeCube the program that suite us the most, that we use associated with MIDI controllers. In the past we “abused” of VDMX by Vidvox and we’ve been in love with the Japanese Composite Station, one of the first vjing program put on the market. As hardware we use different mixers such as the Roland V4 and the Panasonic AVE5. We also have an old Panasonic mx12 that we conserve and respect as a veteran of the war. The materials are usually samples from movies or television, downloaded videos or our material, shoot or virtual

Bertram Niessen: Which is the modality of interaction that you use live? Are there more performers on the same material, are there stratifications or does anyone follow is own output?

Kinotek: Recently we work less and less together at the same console; often we have more shows at the same time so we must separate. In the occasion where we use the console together there is always a big mess, everybody touches everything so the result is a big shapeless and chaotic visual blob!

During the years we obviously developed two different stiles, the one that as a “graphical” approach and concentrate more on the rhythm, on the shape, and the one who cares more about the filmic aspect, giving more light to contents and narration. The specificity of any of us is also the strength of Kinotek that is characterized on the visual plan by the overlapping of graphic form and filmic material.

Bertram Niessen: What is the margin of improvisation that you have? Do you work on a specific match, on an ideal script or is all aleatory?

Kinotek: As far as club vjing is concerned freedom is the key word. We prepare the contents to use, but the ways we can mix them live is strictly extemporaneous and depend obviously from the energy of music and public. But in different occasion a list is needed and useful, for example in the case of particular collaborations with musicians and performers.

In our last project, WorldTour , presented with Forrest Drum at Live Performers Meeting of Rome this year, we divided the selected material for every audio track, then mixed and elaborated live. Differently in a project that we’ll present at the festival Sensoralia in Rome next year (1 st April 2006) we begin from a given material, a mute film of early century ( Gli ultimi giorni di Pompei ) that we will “dismantle” while performing.

Bertram Niessen: Your aesthetic choices are an interesting mix between abstractionism graphic/architectonic and cinematographic narrative. Why this choice ? And how do you measure out you ingredient ?

Kinotek: Our personal styles form the visual of Kinotek. More than a choice, we consider this a direct consequence of our common work and our artistic research, and maybe the characteristic of Kinotek reside in the capacity of create this emerging union from our two aesthetic peculiarity.