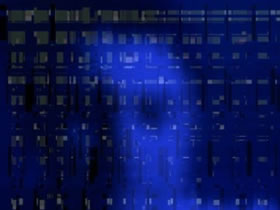 There is a duo who come to the attention of the musical chronicles of Italian underground, a couple able to mix with care both the musical production and the live aspect, the audio synthesis and the video representation.

Echran combines the extreme approach of a pure sound, free from a precise melody, with atmospheres recovering darker sonorities, environment they both come from, going beyond the limited frontiers of this genre and coming to more modern territories, with glitch aesthetics and starting again from the sample fragments at first transfigured and then let flow.

Fabio Volpi e Davide del Col , are technically made up of laptop with Ableton live and Tascam controllers, Korg MS2000 and effects, consisting of drones growing gradually of intensity, with matching of colours and rhythmic structures together with the tone of their sounds.

Bearing in mind common experiences in testing modern technology in order to express their individual sensitiveness, they managed to sum them all up in the Echran project with a perfect synergy. Davide, behind the scenes of the project Ornament, turns upside down environmental sounds, preferring temperatures which, from the ambient go back on a Kelvin absolute zero. Works of a visionary in a post industrial butcher’s, available on the net without any money but the individual frame of mind to accept the content. Fabio in parallel devotes to his adventure with Otolab , a Milan collective famous for its audiovisual experimentation now even outside Italy . In Echran he plays, sings/talks in French and directs live visuals. With the name _dies , Fabio Volpi was heard in the Pavillon of Contemporary Art of Milan, during the review Synchronie 2005 , presenting a grave drum emerging from nothing in some tracks of Echran.

Their fusion led to the recent release of S/t on Ebria records in co production with Small Voices , the first label giving voice to an auto-production relaunching the value of music instead of the strictly economic one, espousing the notion of no-copyright, the second label counting in its catalogue examples of an industrial sound and/or obscure of the recent past: Maurizio Bianchi, Nocturnal Emission, T.A.C, Z’ev .

S/t is a work well welcomed by the musical critics both on the newspapers and on the web, at least for who is careful to seize sound evolutions standing out in a plethora of releases clogging the musical sphere. It is an outstanding result even because it occurred in a phase in which electro music was widening once again its spectre of action, through the fusion of the existing material, the use of digital in emulation of analogical, the recovery of low quality of the forgotten patrimony of 8bits, up to glitch looking back nostalgically once exceeded the cult of error.

In S/t Echran make their poetics sensitive without trapping sound within a textual message and without risking having singing adding elements unconnected with their aesthetics. They resort to acting with the voice of Fabio Volpi, who talks in French and is like a diverted alter ego, a figure representative of each monster hiding in our neighbour. Pathologies loved by media. A CD with a never boring repetition of loops maybe thanks to a progressive dilatation and superimposition of other elements in slow and continuous accumulation of tension. The images of the project were stolen from a master of cinematographic poetry: Tarkovsky who, in Stalker , manages to let you enter a never-ending loop: the long sequence of faces and the endless sound of the rail.

We have the chance to talk to Fabio Volpi , in order to define the form and the substance emerging from S/t, produced even thanks to the precious help of Paolo Romano of Ebria Records, active not only in the production of the label but in the organisation of Impro Free Minimial Core festival BaaFest too- which takes place every two years at the Stecca degli Artigiani of Milan– and above all a true added member of the group. A work totally Italian, but far-reaching.

MK: Tell me about the origins of Echran. How did you met, which affinities have approached you, which common experiences?

Fabio Volpi: Some years ago we played together in a dark group: Vidi Aquam . Than, we continued a solo career, me with _dies and the collaboration with Otolab, through industrial and repetitive sonorities with quite explicit references to ritual and shamanic music, using as a musical instrument an analogical Tascam Multi-track cassette recorder. Davide, instead, with the project Ornament , works in a more ambient environment, with obscure and very dilated drones. Successively, we felt the common need to get rid of those extreme experiences, with a “lighter” project, less intransigent from the point of view of purism, keeping anyway a certain incisiveness and personality in the choice of our sonorities.

MK: How did you meet Ebria and which importance had Paolo Romano and the pals in the production of the record?

Fabio Volpi: Paolo can be considered as the third member of Echran. He managed to translate our requests, a bit too literary and artistic, in effectual audio technical solutions. At the beginning of the recording the relationship with Ebria for distribution wasn’t well defined, it has become effective thanks to the growing enthusiasm and involvement of Paolo in our studio sessions.

MK: S/t had at least a couple of positive reviews here in Italy , and I liked it very much too. I found it, beyond all the words that have already been said and written, a surprisingly mature work. How do you explain the success of critics of S/t? In what can it differ from other Italian field productions?

Fabio Volpi: The good reviews were even more than just a couple, but it is not just that which surprised me the most. I read some reviews which enjoyed me a lot, drifting, becoming pieces of literature. It remains that the most useful to us, that is to say the coldest and most technical ones, have seized some of communication potentialities of the tracks giving a lot of pleasure to the ones, as us, always addressing to a little niche of public. For the rest, I think we had success because of the historical moment the CD was released in, period inflated with continuous releases of rock groups playing uncritically and in full nostalgic trance exactly as Clash or Joy Division did, without shame and with good results of selling. In the middle of all this, a work such as our’s, completely out of fashion, is very positive for the reviewer.

MK: Your work has been defined a work of cold electronic aesthetics, minimal and synthetic, alienating and repetitive, elegant and noisy. All features present and well mixed in a record that maybe wants to give a deeper aesthetical message, or at least different. It is just a feeling or the imprint of your music is moving exactly towards this direction?

Fabio Volpi: One of the key words recurring often in our discussions is illness: that is to say the diverted vision of things through filters such as paranoia, detachment and a certain dehumanisation as main obsessions. If you want, our aesthetics aligns with Memorie del sottosuolo. Dostoevsky has already said all about it better then us. In our case this line, once again extremist, has produced characters, sounds and matching with a strong personality and a recognizable identity.

MK: How do you divide your process of work? How do you work during creation, editing and how do you confront live?

Fabio Volpi: Our project is founded on a strong dilation of sounds generated or taken from loops, from which we extract an infinitesimal part, reiterating it endlessly. This normally constitutes the main part of our work. All the successive sound levels, sinth and voices are superimposed for assonance or dissonance. We decided to mix sonorities coming from different “epochs” such as glitch with space sounds of the 70’s supporting and strengthening one another. During a performance we try to keep together the analogical and digital features of sounds, using both software and sinth.

MK: Which musical or aesthetical influences guide your work? And in this process, how can be read your parallel experiences with con Ornament e Otolab? Fabio, you above all works with Otolab both as far as the collective’s audio and video component are concerned, it’s then you who cares about the aesthetic and live aspect of Echran?

Fabio Volpi: As far as Davide is concerned, his influences go from Deutsh Nepal , to Kirlian Camera, up to Tangerine Dream . My influences are on the basis Islamic music, both sacred and of entertainment. As far as rock-electro music is concerned, I would certainly say Suicide, Joy Division, Pan Sonic and Coil . As general influences of the both of us, I would say the first period of Current 93 and Trobbing Ghristle for their attitude. For the visuals, it’s my fault. We decided to take some works of Tarkovskj, such as Stalker and Solaris and to reproduce them from a point of view stressing the errors, voluntary and not, due to the digital compression of the films. The vocal parts are acted by a blurred and disfigured character entering the videos, giving us the chance to eliminate during a live the figure of the singer -rock-performer, far from our way of being.

MK: In S/t an element fascinates and stands out quite above (or outside) the work: the singing (talking) in French, giving quite a sense of inevitability and collision to the whole musical path of the record. How was this idea born, why in French, which is, whether it exists, the message?

Fabio Volpi: This is my fault too. It is just a decision taken by chance, for job and study reasons I know French rap, to me much more true and effective than the English’s one. So I understood that for our sounds, English or Italian would have been too accommodating. There isn’t a single message, but just the suggestion that each track, or better each single loop, has inside itself. The success of a track depends on how it is given birth.