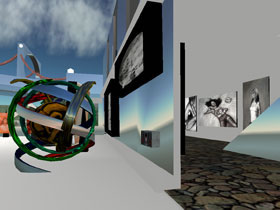 The online 3D world Second Life entirely made up by its residents is becoming a very interesting art experimentations platform. There are different experiences ranging over conferences, debates, communities of artists aggregations, exhibitions, private art galleries, film festivals, poems reading, concerts, and even a drawing course. There are projects involving the real world but existing for SL only.

There are important projects where well-known artists are involved in and real art-galleries like The Port project that realized an isle managed by artists with installations; there is a photographs exhibition by Jeff Wall , a magazine was edited and presented by the Whitney Artport in December (we talked about it in the last issue of our magazine), but there are also some minor initiatives. Quality is variable but it’s sure there’s a great fervour.

In Second Life on 150.000 residents according to a list updated in December 2006 there are 32 subscribed art-galleries , but it’s sure some others were opened during the last two months. These galleries are built up and managed by private persons, by the same artists exposing their works realized in RL (Real Life) to show them to a wider audience. But there are also commercial galleries aimed at selling the works of art for Second Life houses, works of art you can buy to hang on the wall of your living room. So there’re galleries aimed at selling copies of well-known works of art  we can call them posters  which are more similar to stores than cultural initiatives, and there are also galleries of erotic art, sculptures in glass, and objects.

Art-galleries have often many functions, they are cultural centres and clubs with music and art exhibitions. I’ve just participated at the inauguration of a coffee house-art gallery where there were a streaming live concert and the presentation of an exhibition of photographs.

Some art-galleries has a promoter, a specific project, but there are also places which are available and free for emergent artists who want to show their works. Like the Open Air Fine Art Gallery , which defines itself as a fund to help emergent artists take at artists’ disposal two floors and some external spaces to show and sell their works without charge. They also collect donations for artists to help them “to buy clothing…. get started in their own businesses, upload textures and purchase materials scripts etc. for their creations”. There’re painting and drawing but also 3D models, photography the importance is to give everyone the possibility to express themselves. There’s also a free space dedicated to the artists who want to create where I met artists who were modelling their 3D works of art.

Besides art-galleries there are museums starting to structure itself with a promoter, a group of collaborators and a specific line on the selection of the works of art. The Veil Museum is very classical and traditional and appears as a 5 floors palace with glass walls and a stairway made up of wood rounding at the centre of the edifice. Directed by Templar Baphomet is organized as an historical journey on different floors. It starts with The Baroque Collection and a collection by Jan Vermeer on the ground. On the first floor there are The Renaissance Collection and the Impressionists on the second floor there are Art Deco and Art Nouveau , on the third Dada & Surrealism, on the forth Futurists and Cubists.

There are monographic halls dedicated to Edvard Munch and Franz Marc, Pollock , and some Rothko’s works of art. Every hall has an information point with file-cards dedicated to the period and artists presented. The terrace is offered to personal expositions. This is a didactic journey which has been experimented yet  the virtual visit to a museum  that is inserted in a wider and inhabited, and dynamic context.

The Contemporary Art Museum of Second Life mainly presents works of art presented in SL by resident artist. The museum is built up by three edifices, two of them are dedicated to painting and sculpture and one of them is dedicated to video art. Herbert Hoggard is the owner and director of the museum and I met him while he was setting up some video and he told me the museum will be closed for some month because they’re moving to a bigger place.

There’s no museum virtual visit simulating the real museum, but a changing museum with its life in evolution, new acquisitions, new exhibitions in program, and new centres. It has just been announced the creation of the Andy Warhol Foundations , which is a no-profit organization that will promote a collect of Andy Warhol’s drawings, sculptures, videos and audios placed at a new contemporary art museum which is still under construction. This initiative is proposed by the group Art Forum 2006 that wants to create an artists network and it’s collecting funds for the building up of a Centre for artists from Second Life.

Works of arts directly created for SL are completely different from those which are simply photographed and imported as images. They have something to do with modelling, scripts, movement and audio, 3D installations, and performances. They are the first of specific arts for this virtual space and they can’t exist outside. I saw some interesting kinetic paintings, screens inside screen that re-propose the idea of works of art to watch on a monitor hanged on a wall that I see inside a monitor. And rounding sculptures made up of twisted copper that seem a flower. If you click on them you can choose the option ACID TRIP and then the shining forms overrun the screen and bring us in a kaleidoscopic spiral.

The Linden Lab that created Second Life sees a great expressive potential for the art in the world and these days it announced a competitive examination for the first study grant for visual and performing arts in Second Life. The study grant, of 4.000 USDs , is offered to young artists who want to experiment in Second Life for a semester with their own project connected to visual arts, but also music, films, videos, new media arts and architecture.

You can find a photo reportage related to this article here: www.internetlandscape.it.