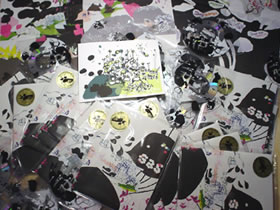 Laura Henno, Jef Ablézot e Morgan Dimnet started their common research at secondary school in Lille where they graduate in plastic art and together start to approach the graphic world. Their artistic path starts in 2000 and leads them to be today an extremely established and internationally active team from the point of view of art and commercial production.

They first presented live at Netmage 02 . In this Bolognese audiovisual kermes, they presented a live introducing a visual poetics able to unfreeze the standards of image in flash and of audio/video interaction, introducing regressive, playful, distorted and magic visual imagery.

Qubogas develop a research at the origin of a surreal universe, developed between abstraction and figuration, with a work combining painting, digital collage, drawing on paper and graffiti. Their works recreate an abstract and imaginary world, made up of chaotic landscapes and explosive microcosms, savage gardens and surreal landscapes. Each illustration is made up of details and of a play of superimposition between colours where the elements are arranged and weighed in such a way to transmit serenity and calm. Their compositions draw a fragile and poetic atmosphere, and the refinement and the childishness of their outlines recreate delicate and evanescent perception spaces.

Baover Tit is the first author’s object realised with the support of Netmage. The CD, which guides us through an unusual and new path in the imagery of Qubogas, is part of a group of creations conceived by the trio (the first one was a live with Scratch Pet Land ) after having won the first prize in the call of the Netmage 02 edition

Silvia Bianchi: Which type of software do you use to create your animations?

Qubogas: We use flash and Photoshop. We draw and then use video software to move our new objects in space. Our work is growing and we adapt it to the different platforms and to the different forms of digital elaborations and to video too. At first, we devoted to performances, then to installations and at present to interactive animations: it is a part of our artistic path

Silvia Bianchi: How do you work during your lives? Do you use Flash during your performances too?

Qubogas: Yes, we do. We are not VJs and we do not have an exclusive interest in technology. The video is nothing but a way to show our work, although it is not essential. We aren’t digital artists, the painting and the drawing are our main passions. Digital is another instrument to express our work. Showing drawings and not making live media is a choice of style. We do believe there are too many people making multimedia projections. In this sense, our work is a way to come to an end with them.

Silvia Bianchi: Tell me about your collaboration with Netamge?

Qubogas: The first time we come to Netmage we were stuck by this unbelievable forum. We had little live experience, we wanted to experiment in this field and we tried to. Netmage gave us a lot; it helped us in communicating and in diffusing our work. It gave us a lot of support and the chance to collaborate with many other festivals.

Festivals such as Netmage are a fundamental instrument for artists to show their works and to boost their productions. Netmage is a kind of family to us. There is a strong connection between us and the people who work there and it is very important for us that there are people who are happy to see that our work is growing.

Silvia Bianchi: Netmage production configures as an interactive work. I am wondering whether you used a scheme of a game.

Qubogas: No. Baover Tit isn’t a game because there is nothing to win. We only wanted to translate the joy and peace peculiar to our animations through a travel in our fantastic world and the use of the multimedia platform gave us this opportunity giving life to our drawings.