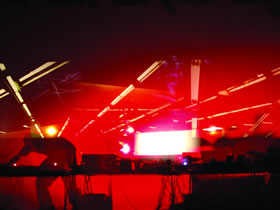 The meaning of the term living-room is incredibly fascinating. The word living room has an abounding in images impact: it’s the “room where you live”, the place where the family and friends spend time together, the room where entertaining stories are told, the fireplace room where the family gathers; the first place of the house where the TV entered and replaced daily chats; the place of the stereo and music for someone, the place of photographs and memories for someone else, the human body extension-space.

So even if styles, design objects, and interior decorations change living-room remains the living and pulsing core of every house in every epoch and at every geographic latitude. This fascinating idea has excited so much the minds of the British collective The Light Surgeons that they have come out with  through an almost natural course – Domestic Archaeology, an installation conceived in collaboration with the Geffrey Museum of London .

The project, a reflection on Londoners’ domestic spaces, will be available to the senses of the audience from 25 April to 28 August inside the museum.

The Light Surgeons were born in the middle of the 90’s as a collective of artists coming from different backgrounds that had in common passions as cinema, graphics and music. The audio-video work, which is very innovative, is performed by these three guys by means of different analogical and digital media, from video to photography, from 16mm films to music. Everything is inserted in an interdisciplinary discourse and they have a documentary research approach on the contemporary society (see also the article The Light Surgeon DigiMag 05).

The founder and director of TLS, Chris Allen is followed by two other artists at the moment: Robert Pyecroft-Rainbow from England and Brede Korsmo from Norway. They participate to international exhibitions with their installations and audio-video performances. The Geffrye Museum , on Kingsland Road at Shoreditch , the most vibrant quarter on the British Trendy scene, is an almost unique museum because it’s focalized on the history of English middle class’s houses and gardens from 1580 now. This inquiry on English houses is carried on by permanent or temporary exhibitions and it is followed by further activities such as publications and educational programs.

TLS  who’s first experiment in 2004 was the installations called The Living Room they showed at Watermans Art Centre di Brentford  have organized some workshops and meetings yet. The 24 of February was presented an extract from the project Parlez-vous? at Transvision friday late , a soirée organized by onedotzero in the beautiful spaces of the Victoria & Albert Museum .

TLS’s Parlez-vous? Was installed in room number 54 of the museum, The Parlour room, 11 Henrietta Street , inside the British Galleries. The interior decoration of this room is a contemporary revisited Sixteenth Century’s style. Only a few persons can enter at once.

A projector projects images of Londoner’s living rooms on the walls while the house owners comment the meaning and content of the living rooms projected.

While you’re in this small room the confessions of the owners of these houses completely attract your attention; one of the people interviewed attacks the presence of the TV in the living room furiously saying he’s never have it because he prefers listening to music in a complete relax; another one comments on photographs and posters on the walls of his living room; images connected to the music business he comes from and memories immediately follow images; on the other hand a woman insists on the importance of living room as a family gathering centre.

Details are very accurate. At the very corner of the roof we see a portion of a cloudy sky and placed on the floor in front of us there’s a screen transmitting the images of an heart. The result is extraordinary, the re-creation of heart and home is perfect. .

In April objects and sculptures realized during workshops will be showed at the Geffrey Museum and the space will be divided into two environments: The Parlour and The Annex . The two environments will be connected by the same hall that divides them, which will be dominated by photographs and prints to re-create the impression of heart and home.

The installation will be a multi sensorial one; there will be old photographs, sculptures, video images, sounds and odours. Through living room investigation TLS guys want to reflect on some of the most meaningful aspects of the British society life-style through generations.

Domestic Archaeology is a sort of a very attentive investigation where Londoners show their houses and let the audience see their life styles, their reflections on daily life, generation to generation connections, and their tastes. So the living room assumes a new character, it become the place where the society is reflected. The kind of approach and communication is based on a double exchange between the museum  becoming an apartment room  and the room  becoming a museum; the private world becomes part of the public world. Visitors will enter the Geffreys museum and they’ll realize they entered a familiar space. The ethnical and social differences that characterize London make in my opinion this project much more charming. In addition the audience will interact with the installation becoming an active part. What’s more, if you can’t visit the museum there’s a dvd and a website to limit physical barriers.

One more time TLS confirm their ability to carry on, together with the creative process, a direct communication with the audience’s minds who are forced to reflect on the stimuli they received and to examine the spaces where they live on their several meanings. This is the great artistic project of one of the last years most sensitive and creative mind: Chris Allen.