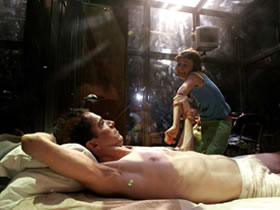 The Fenice’s theatre at Senigallia is becoming a unique referent point for passionate and experts of the contemporary artistic culture.

The company was born from street arts in 1979 and it’s composed by artists engaged in the constant research of new forms and scenic cues. They call themselves Theatrical Guerriglia and even today their radical performances sometimes provoke real popular insurrections.

These subculture punks (the German term “Subkulturrabauken” is a neologism invented by the newspaper Neue Musikzeitung) combine technology and primitivism in paintings of obscure, powerful and morbid beauty with a consistent addition of testosterone, an aggressive freeing of energy, a strong concentration of manly corporeity. So they make young generation love theatre. Their rough beat of music (Fura dels Baus recorded some CDs as a rock group) determines the pressing rhythm of their performances.

“This is a more bared formula. If the Fura is an orchestra this is a camera opera” explains the protagonist Ruben Ametllé , aka Gregor Samsa , that in his master interpretation lays the contemporary youth depressive unconscious bare.

His performance is technically great and he makes the audience “tolerate” and appreciate an hour and a half of mini-tales, which are perfectly connected one to another. Gregor is the young protagonist who decides he doesn’t want to be the protagonist of his life, he decides to give up and choose a passive condition by locking himself in a cube-room isolated from the world. The world around him goes on with his father, mother, sister and friends suffering because they don’t know how to work out his problem. But what’s his problem? All the work is focalized on his vulnerable condition. A son who’s no longer a son because his parents are afraid of him who’s silent and naked, circumspect and dirty like the famous Kafka’s bug. The interests shifts on family’s everyday life with intermissions of videos on the adolescence of the protagonist, from his pre-bug period to oneiric visions of survival and shame.

At the centre of the scene there’s a transparent cube; home and church, reality and dream, life and thoughts. This is a metaphor of the state of the protagonist that represents an external projection also, the cuirass of the insect (who’s tough outside and weak inside). .

La Fura in this case adopted the power of the text (taking no further notice of ” iper-media collective dramaturgy “), of the word, which is used by the different characters “against” the apathy, the “no-logos” of the hybrid element, and the claustrophobic physical body.

This work is far from the last years new perceptions created by the company as MUGRA or B.O.M ., from the scenic actions of DADLE CAFE or XXX, and from such installations as EL CAGANER ; this time multimedia quality  they have been using since the 80s  is supported by other qualities: acting, sensitization and socialization. Life powerfully enters from the entrance door with its worries and enthusiasms, with its youth depressions and excitements but it’s always connected to the family world. The only “fault” of the protagonist is to be too much normal in a world fastening everything without leaving the time to listen anybody.

So the majestic multi-visionary Fura’s machine has changed direction or vision, perhaps their actual theatrical conception is now facing the audience, who’s becoming more and more protagonist. Spectators are more informed, more critical, more pretentious, more difficult to satisfy, but at the same time more intelligent than ever. The culture range increases as time goes by and the quality must increase too. The constant professional skills of the company, which is obviously connected to creativity, instinct, fantasy and historical and modern artistic culture, exerted an Influence on the positive consents they obtained all around the world.

We appreciated therefore the multiplicity of the solicitations in spite of their little technological means, their subversive impact in spite of the fluid narration, the spontaneous and simultaneous visual perceptions, the continuous stimulation-immersion of the audience, the routine super-controlled – but dramatically real – performance and the disturbing and elegantly underground (not borderline ) aesthetics. The transformation has happened, and, as life teaches us, let’s wait for some other changes that always represent evolutions.