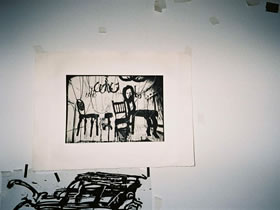 It’s the parable of life, the history of a nation, the reflection of a visual poetic. From 15 to 20 February the MoMA of New York has presented 9 Drawings for projection , the series of animations realized from 1989 to 2003 by the South African artist William Kentridge ( Johannesburg , 1955). With a technique which is essential and shocking at the same time the artist composes the portrait of his Country through a “little history” full of symbolic implications.

In a magmatic and protean landscape the saga of three imaginary characters takes place: they are Soho Eckstein, who’s a mining tycoon and a man of property, his wife and her idealist and passionate lover, Felix Teitlebaum. It’s a non-narration progressing through associations and visual digressions. Bodies change into hills, pools, and animals and buildings collapse to make room for deserted lands passed through masses of poor people. While Soho crashes everything he bump into like a crazy rhino Felix lives in an anxious state that has drawn half of his house like a fish aimlessly roaming about the world. The treacherous love between Felix and Soho’s wife is carried out in the aquatic element like a vital flux opposing to the outside dryness of the African land, of the apartheid social tensions and of Soho ‘s feelings. But Soho ‘s feelings have not completely dead yet and he’ll fight to have his wife again.

Kentridge has been developing this series for a long time. The series was not born as a unique project but it was born as a series of “sketches” to realize a documentary he has never realized. Kentridge starts from a charcoal drawing  with essentially blue and red colour insertions  next he photographs the drawing, he rubs out it, he touches up the pic and then he goes on to the next photogram obtaining a visual flux including in itself all its creation process.

In a literary bustle from sheet of paper to camera the storyboard is eliminated and the animation comes out from a continuous touching up that maintains some previous images trace and the evolution of the artist’s thought. Sheets of papers fly in the floating Soho ‘s world also as if it was a trait d’union among the character, the author and the audience.

As the medium used shows everything is unstable: as the fortune of the rich Soho can’t save him from the common fate of human beings so the cruel power of a government can’t keep the majority of its population in chains. From the bed of the hospital where doctors try to reanimate him the protagonists starts an intimist journey that starting from an individual point of view leads him to the perception of an entire population exploited and segregated.